ON TOP OF THE WORLD: Sheppard Continues 2019 Onslaught, Dominates at Terre Haute for Ninth Win 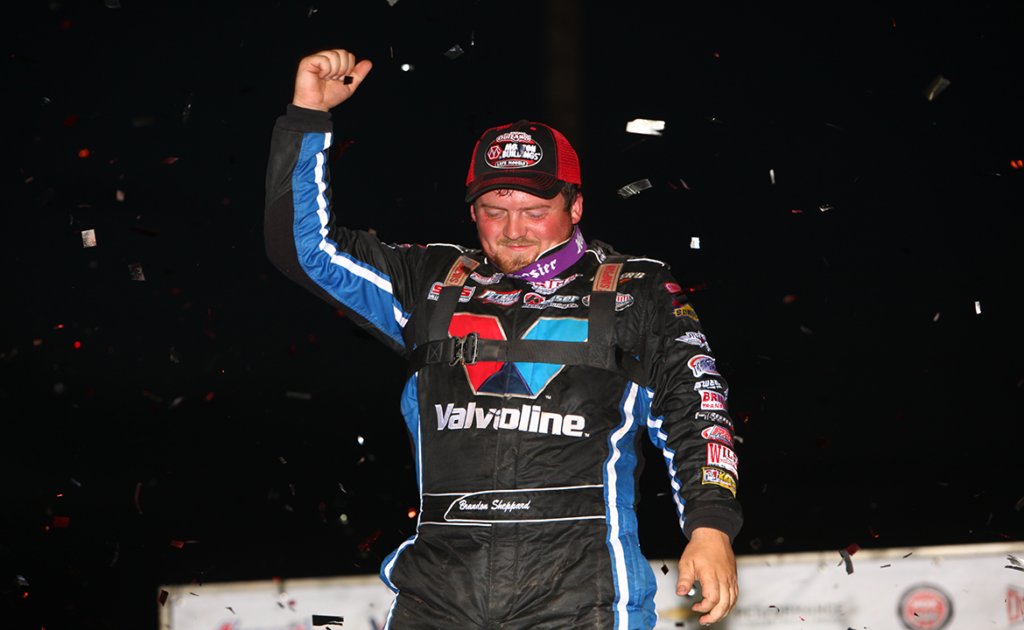 It just doesn’t seem to matter what track or who the competition is, Brandon Sheppard and the Rocket1 Racing team are just plain dominant. Even when pitted up against the most seasoned drivers of the DIRTcar Summer Nationals on Friday night at the Terre Haute Action Track, Sheppard doesn’t flinch.

For the ninth time this season on the World of Outlaws Morton Buildings Late Model Series tour, Sheppard earned the win and extended his lead in the overall championship. “The Rocket Shepp” blasted to the lead in the Series’ second-ever visit to historic half-mile Terre Haute and methodically paced the field over a hard-charging Bobby Pierce and Darrell Lanigan, who garnered his 10th top-10 finish of the season.

Setting fast time in his qualifying group, winning his Drydene Heat race and redrawing the pole, Sheppard took off like a Rocket and, at one point, opened up a near-four-second advantage over his competition.

Leading all 30 caution-free laps for $10,000, Sheppard made it look easy. He entered several waves of lapped traffic but disposed of each one with ease, giving him the separation he needed to build a cushion around his large lead.

This victory also gave Sheppard his second Summer Nationals win of the year – the other coming just 10 days ago at Jacksonville Speedway in his family-owned #B5 machine.

“It’s a dream season,” Sheppard said. “I hope we can keep it rolling.” 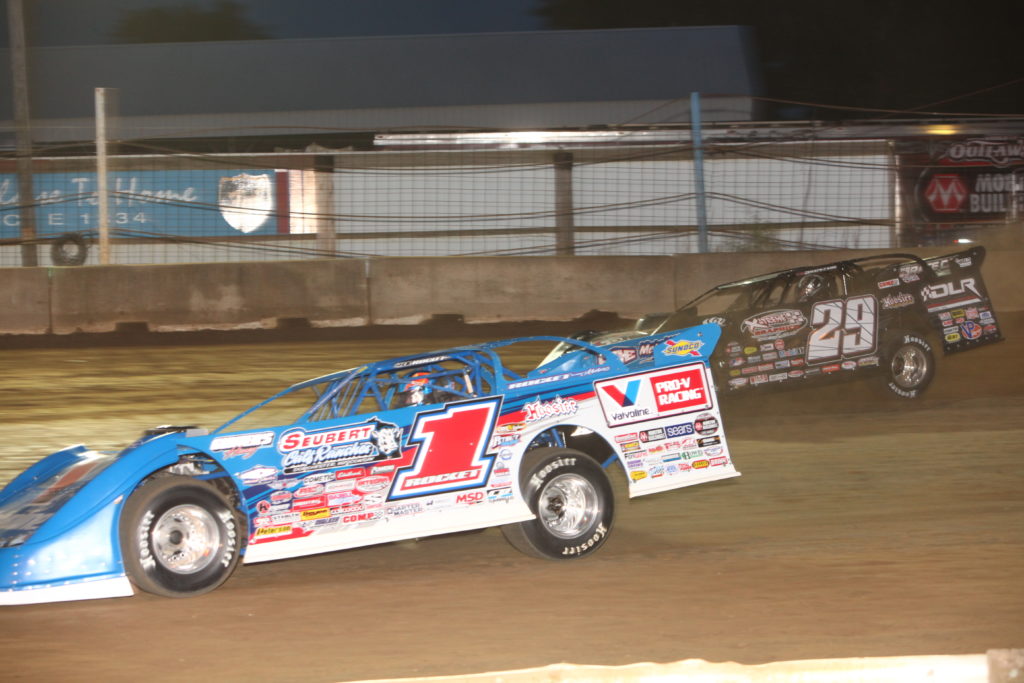 Taking all of his World of Outlaws victories into consideration this year, Sheppard has won on three of the four track sizes where he’s competed — half-mile, 3/8-mile, quarter-mile — and now enters his name into the large history books at the Vigo County Fairgrounds oval. Had this 30-lap, co-sanctioned race been set for the normal World of Outlaws distance of 50-laps, however, it’s possible Pierce might have been the one holding the VP Racing Fuels checkered flag in Victory Lane.

Pierce put on quite the show once he cracked the top-five with 13 laps remaining. Riding the cushion, right where he’s so often found, the three-time Summer Nationals Champion turned some of his fastest laps of the race in the final 10 circuits while in hot pursuit of the leader. Possibly, a little too hot.

“The motor was running hot, and if it wasn’t, I really would have pushed the issue even harder than I was to catch Brandon,” the Oakwood, IL driver said. “The oil temperature and the water temperature gauges were blinking at me for about the last 15 laps, so I didn’t want to I didn’t want to push it too hard.”

Coming from the eighth starting spot, “The Smooth Operator” chipped away at the cars in front of him and made steady progress towards the front, eventually reaching the rear bumper of Lanigan on lap 24. Pierce drove it hard into turn three underneath Lanigan and appeared to have the spot secured coming out of turn four, but Lanigan made an excellent crossover maneuver to take the spot back at the start/finish line.

Once again, Pierce threw it in hard on the top groove heading into turn one and, this time, made it stick as he swiped third away and cracked the whip to reach his next target, Billy Moyer. It didn’t take nearly as long for Pierce to get around Moyer, disposing of him in just two corners. Now, with just five circuits remaining, Pierce was running out of time in his pursuit of Sheppard.

“By the time I got past Lanigan, I was looking for Brandon,” Pierce said. “Finally, I spotted him, he was so far gone without having a caution during the race. One side of me was wanting to go for it and dig hard to catch him, but the other side of me was thinking, ‘Well, this is a good points night, second’s not too bad.’” 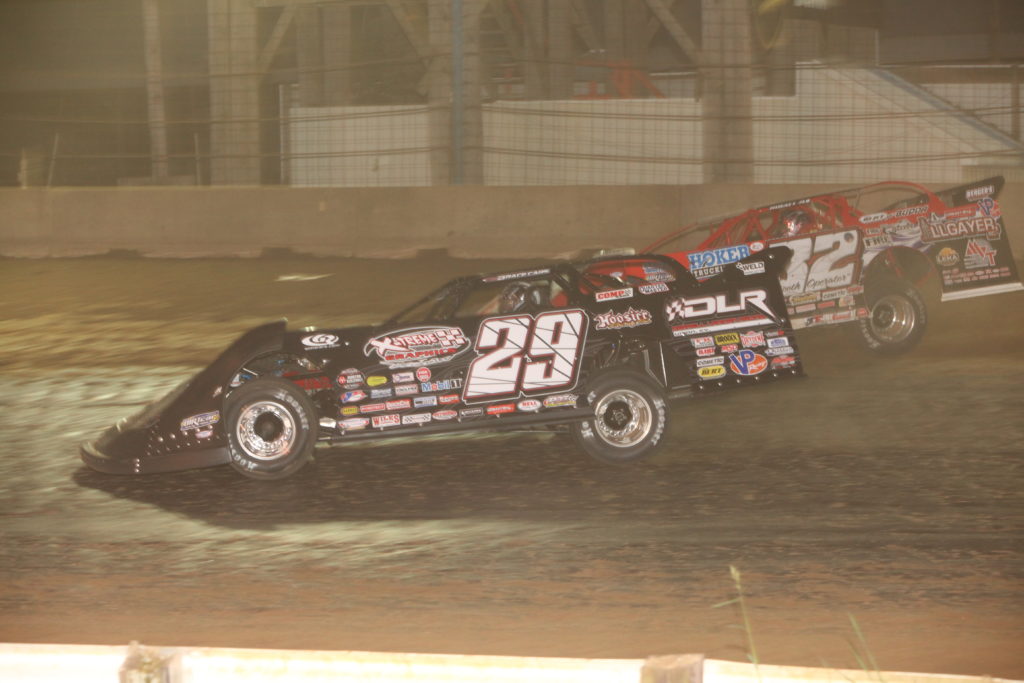 Pierce took heed of his first instinct and gave it all he had for the final laps, but came up just under three seconds short of his first World of Outlaws triumph. Pierce has multiple second-place finishes with the Outlaws and has also yet to find Victory Lane on the “Hell Tour” so far this season. But now that the series’ continuous bout with Mother Nature has finally taken a rest with four-straight race nights completed, he’s confident that the work he and his crew have put in will pay off in no time.

“Four second-place finishes aren’t too bad, but not having a win yet is definitely making me thirstier to get a win, Pierce said. “I think it’ll come, but this is a tough series. You’ve got to have luck, but you’ve got to be fast too. I think we’ve got a good car, now that we’ve been working on it a lot.”

Ten more laps? A late-race caution flag? Pierce thought either would have made things different in the end. And with so many second-place finishes this year, it would have been a nail-biter had Pierce had time on his side.

“If there was a caution, things would have gotten really interesting, I think,” Pierce said. “Terre Haute is just one of those tracks with so much history, I want to win here someday. I’ve also never won a World of Outlaws show, and I’ve ran second so many times. I’m tired of running second, so I would have run Brandon hard to try and get the job done.”

Next on the schedule for the Outlaws is the beginning of the Northern swing, as the Series visits the state of Iowa for the first time this year at Independence Motor Speedway on Friday, July 5, and then goes to Minnesota for a clash at the Deer Creek Speedway on Saturday, July 6. Catch all the action live on DIRTVision!