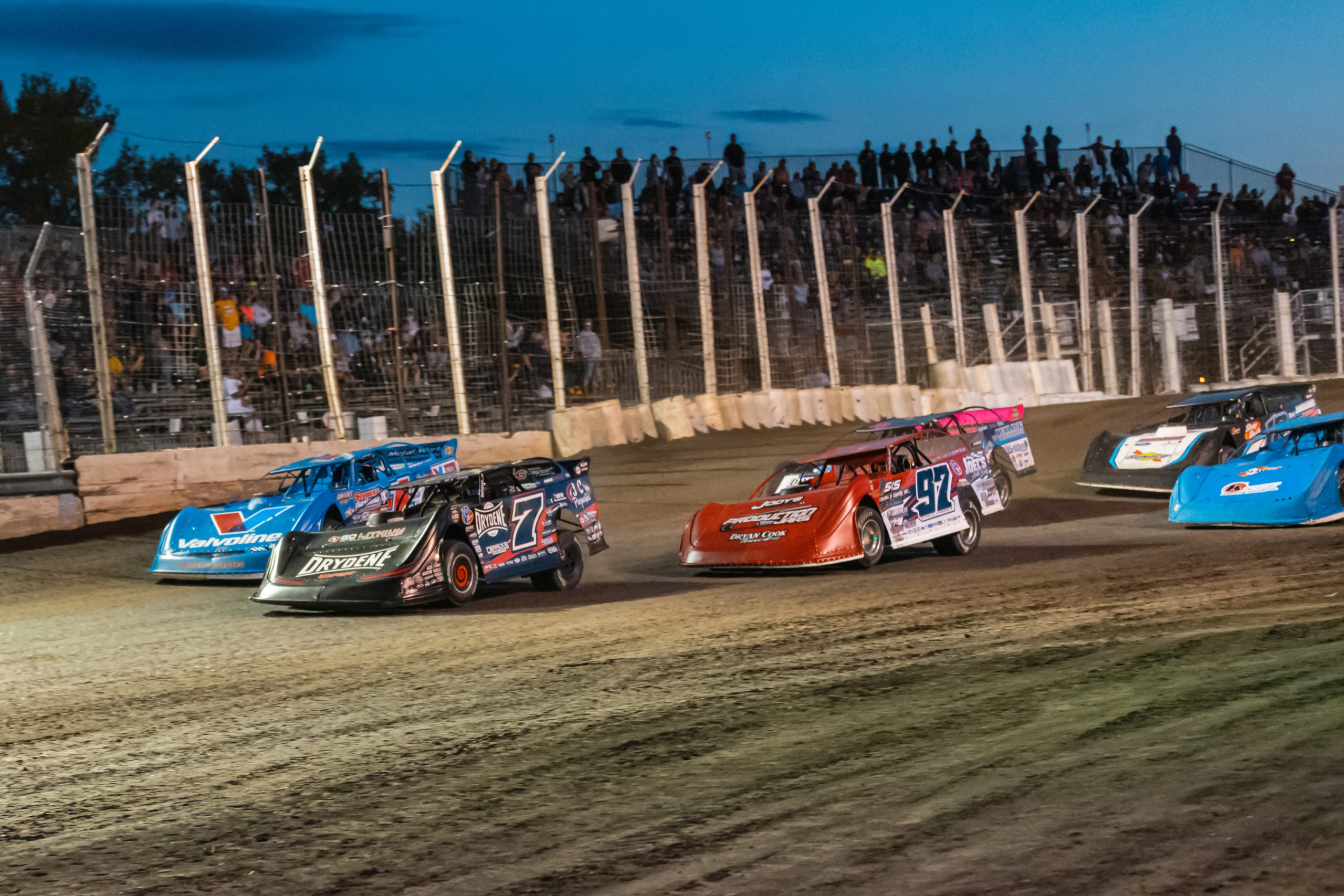 Tim Hunt Photo
Morton Buildings Late Models Back in the South with Races in Georgia and South Carolina This Weekend
By Brian Walker | August 31, 2020 at 7:43 pm

Heading down south this weekend, the World of Outlaws Morton Buildings Late Model Series drivers will face a stout group of locals and several of the best outsiders in the nation for back-to-back nights.

Scheduled for a Friday, September 4 date at Lavonia (Ga.) Speedway and a Saturday, September 5 show at Lancaster (S.C.) Motor Speedway, fans can expect the regular World of Outlaws superstars such as Brandon Sheppard, Scott Bloomquist and Darrell Lanigan, among many others; plus a handful of outsiders including Brandon Overton, Chris Madden, and Chris Ferguson, who look to spoil the party and defend the south with $10,000 on the line both nights.

From Big Sexy’s 2020 domination and Smokey’s new ride to Sheppard’s dominance at both tracks and Ashton Winger defending his home turf, this weekend’s doubleheader is chalked full of noteworthy storylines to follow. Here’s a little preview of what to keep your eye on at Lavonia and Lancaster:

BIG SEXY IS BACK: Scheduled to compete at Lavonia and Lancaster, Brandon Overton of Wells, Ga. will make his first appearance with the World of Outlaws Morton Buildings Late Model Series since he capped a Cedar Lake Speedway sweep with the $50,000 USA Nationals title on August 8. A 17-time winner already in 2020, “Big Sexy” has risen to prominence as one of the hottest Dirt Late Model drivers since taking the nation by storm in his Wells Motorsports No. 76 Longhorn Chassis. A proven front runner at both joints this weekend, Overton brings in a third-place run at Lavonia with the World of Outlaws from last year and a victory in the Carolina Clash at Lancaster earlier this season in May.

HOME COOKIN’: For the first time in his World of Outlaws Morton Buildings Late Model Series career, Rookie of the Year leader Ashton Winger will lead “The Most Powerful Late Models on the Planet” into his home state of Georgia this Friday night. A native of Hampton, Winger and his Franklin Enterpries No. 12 Rocket will have a two-hour drive down the road to Lavonia Speedway for his first series start at the Lavonia, Ga. facility. With five top-five finishes and 16 top-ten results to go along with his first career win at Cedar Lake (Wisc.) Speedway from July 3, the 20-year old gasser has quickly developed into a formidable contender night-in and night-out on the Outlaw tour.

SMOKEY’S NEW RIDE: After departing Scott Bloomquist Racing and forfeiting his third-place championship run with the World of Outlaws, Chris Madden of Gray Court, S.C. will make his first series appearance since late June this coming weekend. Teamed up with Rum Runner Racing, “Smokey” will have a brand new Drydene Performance Products No. 44 Longhorn to break out at Lavonia and Lancaster. He’ll enter Friday’s show at Lavonia as the defending winner, having beaten Bloomquist in a phenomenal side-by-side battle to lead a Team Zero 1-2 in last October’s race with the World of Outlaws. With the narrative of teammates flipped to rivals, Madden will be on the hunt to not only top Bloomer’s No. 0, but also nail down his 28th career win with the series.

FERGY TIME: Back with the World of Outlaws Morton Buildings Late Model Series for the first time since March at Smoky Mountain (Tenn.) Speedway, Chris Ferguson of Mount Holly, N.C. will be in action both nights this weekend in his Team Zero Race Car No. 22. Starting the weekend on Friday night, Fergy returns to Lavonia (Ga.) Speedway where he was a tenth-place finisher with the Outlaws in 2018. With a trip to Lancaster (S.C.) Motor Speedway on deck for Saturday, the two-time Outlaw winner heads for a track where’s he has found his stride of late. Along with six top ten results in his last six races at Lancaster, Ferguson has a Southern All Stars victory at the track from November of 2018. Is this the weekend he snaps a five-year dry spell with career win #3?

PARITY AT LAVONIA: In three previous Morton Buildings Features at the Lavonia 3/8th-mile, a trio of different winners have all found their spotlight in victory lane. The Bluegrass Bandit Darrell Lanigan of Union, Ky. won the series debut in 2014 with a late pass over Tim McCreadie; Brandon Sheppard led all 50 laps to win the 2018 event; and Chris Madden beat Scott Bloomquist in a 2019 thriller. With all three drivers in attendance on Friday, either we’ll see our first repeat winner at Lavonia or a fourth victor will keep the streak alive.

NEW TRACK ON THE BLOCK: Built in 1954, Lancaster Motor Speedway in Lancaster, S.C. is one of the oldest dirt tracks around. However, in all that time, the World of Outlaws Morton Buildings Late Models have only made one appearance at the big, fast half-mile on June 1, 2019. Entering the second series event this Saturday, Brandon Sheppard comes in as the only winner after beating Ross Bailes, Michael Brown, Johnny Pursley and Zack Mitchell in last year’s debut. B-Shepp will have a shot at going for two-for-two on Saturday, but he’ll have to outran a string of hungry Outlaws and a collection of stout locals and proven invaders.

CHAMPIONSHIP CHASE: With ten points-paying races left on the 2020 calendar, Brandon Sheppard of New Berlin, Ill. continues to lead the way with a 13-win season aboard the Rocket1 Racing No. 1. Trailing The Rocket Shepp is a pair of sophomore sensations in Ricky Weiss and Cade Dillard followed by seasoned veterans Darrell Lanigan, Chase Junghans and Dennis Erb Jr.. Rookie of the Year Ashton Winger has passed Scott Bloomquist with Boom Briggs and Brent Larson rounding out the top ten at the moment.

For more information regarding the World of Outlaws Morton Buildings Late Model Series, stay tuned toworldofoutlaws.com/latemodels/ and @WoOLateModels on social media. And, as always, watch every lap live on DIRTVision.com.