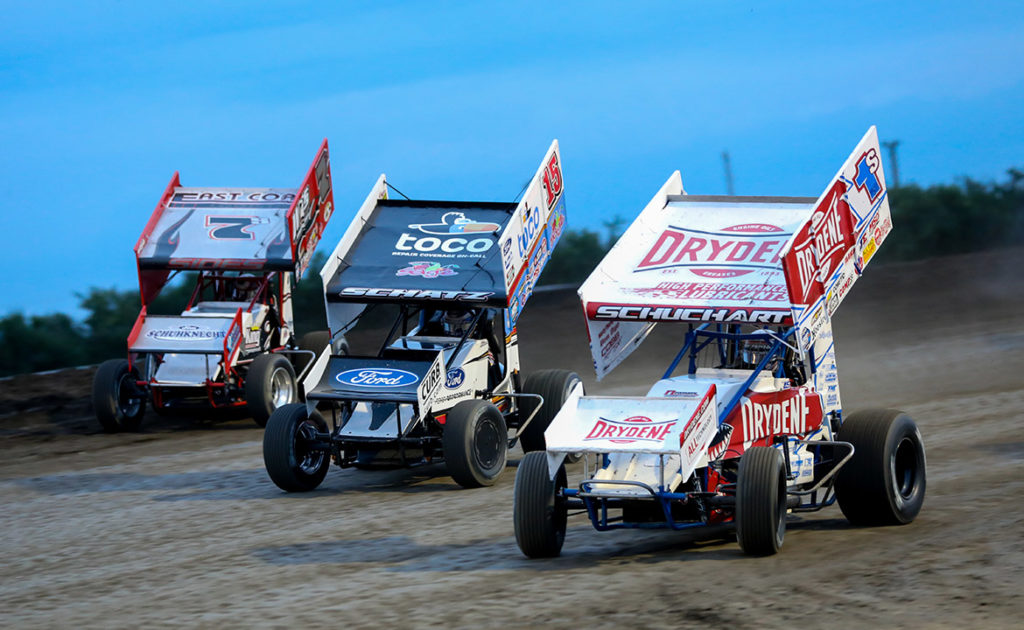 There are few ways to make $25,000 on a Tuesday night in Western Pennsylvania, but on July 23 in the Don Martin Memorial Silver Cup at Lernerville Speedway the World of Outlaws NOS Energy Drink Sprint Car Series superstars will be battling in a huge stakes sprint car race to do just that.

From a purse of more than $85,000, drivers will be chasing not only the top prize, but those who battle through Heats and Last Chance races for the Feature event will pocket at least $1,200.

The race marks the 40th consecutive season the World of Outlaws have raced at the historic track in Sarver, Pa., where fans will see their local heroes take on the Outlaws and other invaders from throughout the region.

Brad Sweet won at the 4/10-mile track last September and finished second to Kyle Larson in last year’s Don Martin Memorial Silver Cup event. He’s been one of the most consistent and dominant drivers this year by currently holding the record for the most laps led, the most podium finishes and the most wins this year. He and his Kasey Kahne Racing team have been hooked up with no signs of faulting anytime soon.

“It’s great our sport has so many big paying races,” Sweet said. “You really want to be running good heading into those shows, but you still have to go in there and execute.”

Donny Schatz put on a show for fans during last year’s July race at Lernerville by charging his way from ninth-place to third. He’ll be poised for another strong finish as he looks to regain some momentum and cut into Sweet’s lead in the championship standings. So far this season Schatz and Sweet haven’t been able to get away from each other. When you spot one, the other is usually not too far behind. Their battle is sure to continue into the Don Martin Memorial Silver Cup.

Fellow World of Outlaws drivers and Northeast-natives David Gravel and Logan Schuchart may break up their battle and potentially spoil Sweet or Schatz’s chance at a win. Both drivers have excelled this year with Gravel winning four races, so far, with his new Jason Johnson Racing team and Schuchart already claiming four wins – he had four wins total last year.

Gravel, of Watertown, Conn., has won at Lernerville Speedway twice. Schuchart of Hanover, Pa. has yet to claim a Series victory at the track, but has already found success on 4/10-mile tracks this year when he won at The Dirt Track at Charlotte.

The race is sure to be a Tuesday night thrill ride. And with 16 different winners, so far, this season, a clear winner is far from predictable.

Following the Series’ visit to Lernerville Speedway, the World of Outlaws will make its return to Williams Grove Speedway, in Mechanicsburg, Pa. on Friday, July 26, and Sat., July 27, for the Champion Racing Oil Summer Nationals. Get tickets and more information.