World of Outlaws Return to Charlotte

Tags: The Dirt Track at Charlotte 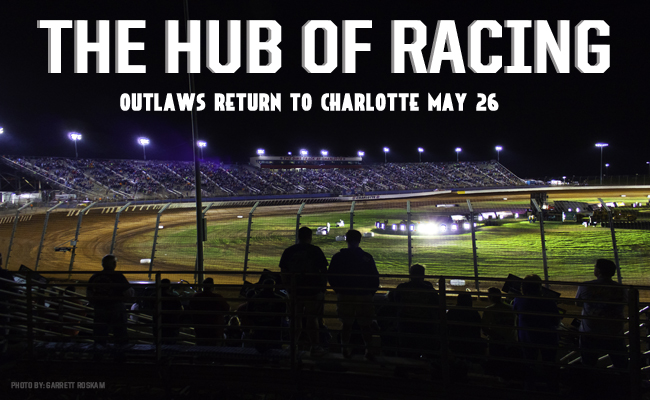 Drivers aim to etch their name in racing history

No city is more synonymous with auto racing than Charlotte, NC. On Friday, May 26, The Dirt Track at Charlotte Motor Speedway will host the World of Outlaws Craftsman® Sprint Car Series for the 16th time, giving one driver the opportunity to say he won at Charlotte alongside the best in the industry.

Having earned the nickname ‘The Hub of Racing’, Charlotte, NC is home to many racing heroes, including numerous NASCAR teams and two full-time World of Outlaws teams: Larson Marks Racing and Kasey Kahne Racing.

The grueling World of Outlaws Craftsman Sprint Car Series 93-race schedule crisscrosses the country from Florida to California, working its way back east, then up into Canada and other places in between before making it to North Carolina. The Outlaws have up to four events a week this season, and for many drivers and crew that means not seeing family from February’s legendary DIRTcar Nationals in Florida until whenever the Series nears their hometowns. For Larson Marks Racing and Kasey Kahne Racing this only happens twice a year: during the May Outlaw Showdown, and of course, World Finals.

Charlotte is an elite track that most drivers have circled on their list of “most wanted” trips to Victory Lane. There’s nothing sweeter than winning at a place that holds so much history and esteem, etching your name next to racing idols that have also won at Charlotte, whether at the 1.5-mile speedway or at the dirt track.

“I’ve never dreamt in my wildest dreams that I would ever get this opportunity,” Greg Wilson said following his 2016 win at The Dirt Track at Charlotte Motor Speedway. “I have been blessed to run with the World of Outlaws. To do this in Charlotte, in front of all these fans, this is badass, and that’s all there is to it!”

Sixteen full-time World of Outlaw drivers, along with many other invaders will be vying to add their names to the list of drivers that have won an event at Charlotte at the end of the month.

Tickets for the Circle K NOS Energy Outlaw Showdown at The Dirt Track at Charlotte Motor Speedway can be purchased at CharlotteMotorSpeedway.com For more information visit WoOSprint.com