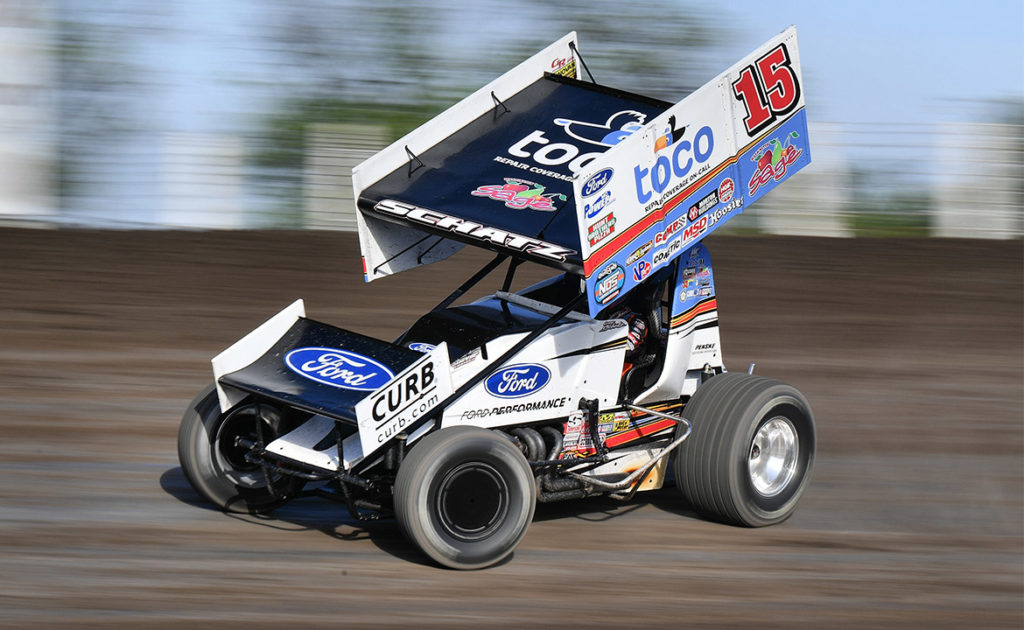 The World of Outlaws NOS Energy Drink Sprint Car Series will make their second and final visit of the season to River Cities Speedway in Grand Forks. N.D., on Friday, August 16 for the running of the 2nd Leg of the Gerdau Northern Tour. In June, Logan Schuchart was victorious to score his first win the high-banked bullring.
Donny Schatz has been the dominant driver at River Cities Speedway over the years, racking up 11 wins in 24 races. The 10-time and defending series champion swept both races at the track last year and has visited victory lane in seven of the last eight Outlaws races at the venue. Schatz has finished in the top-10 in all 24 of the previous main events contested by the series at the track, with 22 of those being top-five performances, including a fourth-place showing in June, after starting 11th.
A total of 10 drivers have won with the World of Outlaws NOS Energy Drink Sprint Car Series at River Cities Speedway, dating back to 2007. Daryn Pittman, the 2013 series champion, along with David Gravel and Kraig Kinser are all past winners at the track, who will be in action on August 16.
Brad Sweet leads the World of Outlaws into River Cities Speedway, as he holds a scant two-point lead over Schatz. Sweet leads the series with 12 victories this season as well 32 top-five finishes. Schatz has won seven times and leads the series with 42 top-10 finishes in 46 races.
David Gravel, who has five wins this season, is currently third in the standings, 118 points out of the lead. Daryn Pittman, who opened the season with a pair of wins in Florida, back in February, is fourth in points. Logan Schuchart is fifth in points, on the strength of four wins.
Shane Stewart, who won earlier this season at Fairgrounds Speedway in Nashville is sixth in points, with Carson Macedo, who has two wins in seventh. Ian Madsen, who won earlier this season, during the West Coast Swing is eighth, followed by Sheldon Haudenschild, who has a pair of wins, in ninth and Brent Marks 10th. Also on the Outlaws trail this season are veteran drivers Kraig Kinser, Jacob Allen and Jason Sides.
In action along with the World of Outlaws NOS Energy Drink Sprint Car Series will be the NLRA Late Model Series. Donny Schatz was victorious in June, when the NLRA joined the World of Outlaws at River Cities Speedway. The North Dakota native most recently won with the NLRA at his home track of Nodak Speedway in Minot on August 4.
Tickets for the 2nd Leg of the Gerdau Recycling Northern Tour at River Cities Speedway on Friday, August 16 can be purchased in advance online at slspromotions.ticketforce.com or by calling 815-344-2023, as well at ticket outlets in the Grand Forks area and at the track on race day. Save $5 on General Admission tickets, when purchased at participating O’Reilly Auto Parts locations.