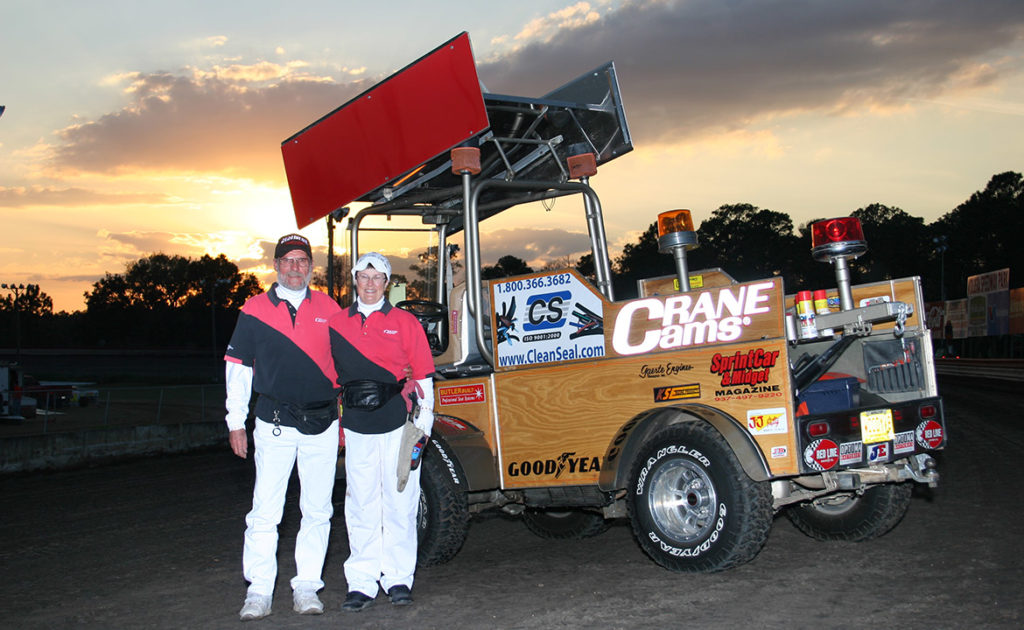 One night of spectating a Sprint Car race at West Capital Speedway in 1974 turned into a more than 20-year journey with the World of Outlaws for Art and Carol Malies.

“A couple of push trucks ran into a couple of Sprint Cars and Art sat up there and said, ‘I can build something that won’t do that,’” Carol Malies said. “So, guess what, it took us about four years, and we found a Willys Jeep and took him about three to four years to get it all fixed up for what he wanted, and the rest is history.”

It became a more than 30-year history with the custom-made push truck famously known as Work’N Woody. Art and Carol Malies started using Work’N Woody as a push truck in 1979 and became the Official Push Truck and Safety Vehicle of the World of Outlaws Sprint Car Series in 1988.

More than one million miles later Work’N Woody’s time as the official push truck came to an end in 2010 when the Series went in a different direction. Since then the truck has resided in New Mexico at the Malies’ home, Art Malies said.

However, that won’t be the case anymore. The World of Outlaws has purchased the historic push truck and will keep its legacy alive by displaying it at events that will impact as many fans as possible. Fans will be able to see Work’N Woody on display at the Nov. 7-9 Can-Am World Finals at The Dirt Track at Charlotte and meet Art and Carol Malies.

“It’s about preserving a part of the Outlaw history and making sure the fans of the future can enjoy the nostalgia of the past,” said World of Outlaws CEO Brian Carter.

For Art, seeing Work’N Woody back with the World of Outlaws is a pleasure. He said the truck’s time has passed with the advancement of new powerful ATVs and the evolution of the race cars, so he’s happy Work’N Woody has found a new purpose.

“When I built Woody the motors weighed 800 pounds,” Malies said. “There was no way two guys were going to pick up a motor and put it in a car. So, I built the lift boom for that reason. And the spring push bar that’s on the front of Woody, that was built for the fact that we were pushing Super Modifieds, as well as Sprint Cars. Even Sprint Cars then weighed 2,700 pounds. So, when you hit them they were like a brick. The spring bar was not only for them, it was for us. I could always get a one- or two-inch rolling start and hit somebody and they didn’t even know it.”

However, Malies recalled one night he hit Steve Kinser’s car from about two feet back.

“He rolled up to the push lane and unbeknownst to me, I was either talking with somebody, one of the other crew members, and Steve was trying to get his car in gear and kept pushing it forward,” Malies said. “When he finally got it in gear, he was two feet away from me. Well, all of the sudden, whoever said, ‘Go,’ and I went at a two-foot head start.

“I went over to apologize to him as soon as we got back into the pit area and he said, ‘Was that you? What the hell happened there?!’ I told him about rolling it forward, he said, ‘Well, hell, you’re supposed to pay attention.’”

Kinser admitted the push was still not as bad as one he would have gotten from a regular push truck, though, Malies said.

Work’N Woody started life as a 1957 FC150 Willys Jeep. After buying it for $300, it took Malies four years to build Work’N Woody the way he envisioned — with four-wheel drive, a push bar, engine lift and a small block Chevy engine.

One thing that kept he and Carol coming back every year was the support of the fans and their love for Work’N Woody, Malies said.

“Ended up being way too damn much fun,” Malies said about being on tour with the World of Outlaws.