WHAT TO WATCH FOR: World of Outlaws California Swing Continues at Merced & Ocean 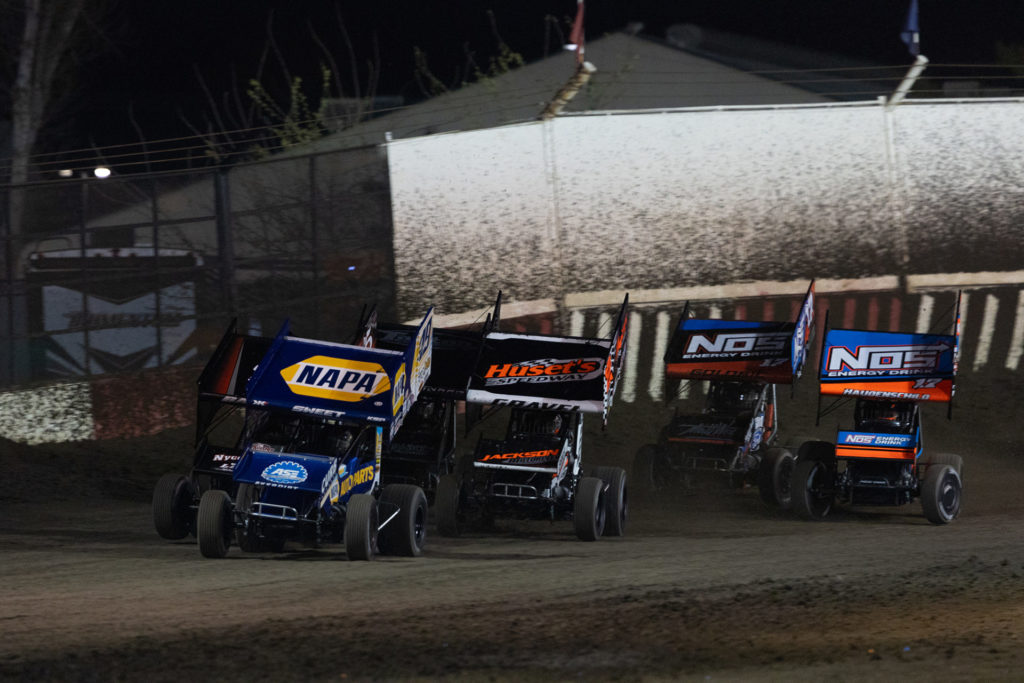 Both Venues Back on Schedule for First Time in 5+ Years

The California spring swing is officially off & running, and boy is the World of Outlaws NOS Energy Drink Sprint Car Series offering some thrillers.

Up next is a pair of bullrings with Merced Speedway on deck this Friday and Watsonville’s Ocean Speedway set for Saturday.

It’s been quite a while since the World of Outlaws visited both venues with the most recent appearances being won by David Gravel at Merced (2014) and Brad Sweet at Ocean (2016). Both of those championship contenders along with 13 other full-time Outlaws and a heap of local superstars will be in action this weekend.

Here’s a quick look at what to watch for this weekend:

HUNGRY FOR MORE: There is no denying that the start of David Gravel’s ninth full-time World of Outlaws campaign is the greatest of his career. The Watertown, CT native is firing on all cylinders to kick off his second season with Tod Quiring’s Big Game Motorsports. Through seven races, they’ve finished no worse than seventh with four podiums and six top-five finishes.

However, those stats alone prove why Gravel is hungry for more. He’s led the most laps (52) thus far, but only has one win to show for it. He said following Friday’s second-place effort he’s “getting tired of not being on the top step of the podium.” With one excellent season under their belts, Gravel, Cody Jacobs, Trey Jacobs, and Zach Patterson expect wins and lots of them in year two.

The 29-year-old hopes to score win #2 this Friday night at Merced Speedway, where he enters as the defending winner with a 2014 score.

NOT SO SWEET: It’s hard to believe that it has been over half a year since Brad Sweet won a World of Outlaws race, but it’s true. The Big Cat is currently riding a 23-race drought, his longest dry spell in more than 250 races dating back to a stretch that saw 29 nights without a victory from 2017-18.

That’s not to say the Kasey Kahne Racing, NAPA Auto Parts #49 team is struggling, they’re just barely coming up short of Sweet’s milestone 75th career Series win. Excluding the season opener, the Grass Valley, CA native has an average finish of 4.1 and last weekend upped his season-best to second-place at Tulare. He currently sits second in the standings (-36 to Gravel) with a fourth consecutive World of Outlaws championship on the line this year.

Sweet has scored wins at both upcoming tracks with an ASCS National Tour victory at Merced in 2020, and he’s the defending World of Outlaws winner at Ocean from 2016.

SUPER SCELZI BROS: The California swing brings not one, but two Scelzi brothers to national attention. Both Dominic (24) and Giovanni (20) led laps last weekend at Tulare, and both will compete in the remaining four World of Outlaws races this month in California.

Giovanni, the youngest of Gary & Julianne’s sons, is already a four-time Series winner with an extra pep in his step following his first Outlaw win in California last week. The KCP Racing #18 driver fended off countless challenges to win Friday’s Feature at Tulare and now turns his attention to his first win at Merced & Ocean this week.

Dominic, the elder of two boys, came closer than ever to scoring his first-career World of Outlaws NOS Energy Drink Sprint Car Series win. He led nine laps in Saturday’s show before slipping to finish seventh in the Scelzi Motorsports #41.

BUILDING STEAM: Kevin Gobrecht Rookie of the Year contender Spencer Bayston led laps in both races last weekend at Tulare, leading back-to-back World of Outlaws Features for the first time in his career. The 23-year-old native of Lebanon, IN is beginning to hit his stride with Crew Chief Barry Jackson and the rest of the CJB Motorsports #5 team.

Bayston, and fellow rookie Noah Gass (Mounds, OK), will make their first appearances at Merced & Ocean this weekend in World of Outlaws competition. However, Bayston does have experience at both tracks from a USAC Midget top-five at Merced to a NARC podium at Ocean.

BOUNCE BACK: Another three full-time World of Outlaws drivers are hoping to bounce back from a rough go at Tulare last weekend.

After finishing 1st-7th-6th-5th-8th through the first five events, Donny Schatz ran 13th & 24th (flip) at Tulare. The 10-time Series champion has won at six different California ovals, but neither Merced or Ocean are on that list. He’ll try to change that this weekend aboard the Tony Stewart/Curb-Agajanian Racing #15.

Logan Schuchart of Hanover, PA left California as the Gold Cup champion last fall but didn’t find that same luck in his spring debut. Tulare results of 15th & 12th marked his first occurrence of back-to-back finishes outside the top-10 since last summer. The driver of the DuraMAX, Drydene #1S has yet to run a Feature at Merced but did finish second in our last visit to Ocean.

James McFadden had an up-and-down opening weekend in Dennis & Teresa Roth’s home state of California. The Australian was Friday’s KSE Hard Charger (21st-to-6th) but ended the Tulare trip with a 15th-place finish on Saturday after being caught in three different cautions. If all goes well at both Merced & Ocean, J-Mac could reach 100 World of Outlaws top-10 finishes this weekend.

SEASON DEBUT: A trio of Californians who missed out at Tulare are expected to make their season debut with the World of Outlaws NOS Energy Drink Sprint Car Series this weekend.

Justin Sanders of Aromas, CA is one of the betting favorites to be the next first-time winner with the Series. He’s a two-time podium finisher in 15 World of Outlaws starts and has the opportunity to race at his home track of Ocean Speedway this weekend. He’s won 30+ times at the Watsonville, CA track and even has winning experience at Merced, too, topping a NARC show there last year.

Tim Kaeding, a 21-time World of Outlaws winner, returns to competition with the Series this weekend in the Bates/Hamilton #42X. TK has yet to beat the Outlaws at either facility, but he does own 15+ local/regional wins at Ocean and three podiums in four visits to Merced.

Bud Kaeding of Campbell, CA is planning to compete only at Ocean Speedway on Saturday, his first World of Outlaws race since 2019. BK has 85 starts throughout his career with the Series and 19 top-10 finishes and a career-best of third-place to show for it. He’s trying to join father Brent Kaeding & brother Tim Kaeding on the All-Time Win List.

LOCAL LOVE: While California natives are 2-0 against the World of Outlaws on this trip west, the true local racers still remain winless. That’s something that could very well change this weekend, though.

Along with the likes of Dominic, Justin, Tim & Brent, there are several others to keep your eyes on at Merced & Ocean. Shane Golobic has plenty of laps at both tracks and enters fresh off a top-10 at Tulare. He’ll be going for a third-career World of Outlaws win this weekend in the NOS Energy Drink #17W.

Colby Copeland made it in Saturday’s Dash at Tulare and earned his first SCCT victory at Merced and his first NARC win at Ocean. Now he’ll have the chance to get his first World of Outlaws win at either bullring. Mitchell Faccinto, aboard the Tarlton #21, is another multi-time Ocean Speedway winner with his sights set on a career-best run this weekend.