WHAT TO WATCH FOR: The Greatest Show on Dirt at PA’s Speed Palace 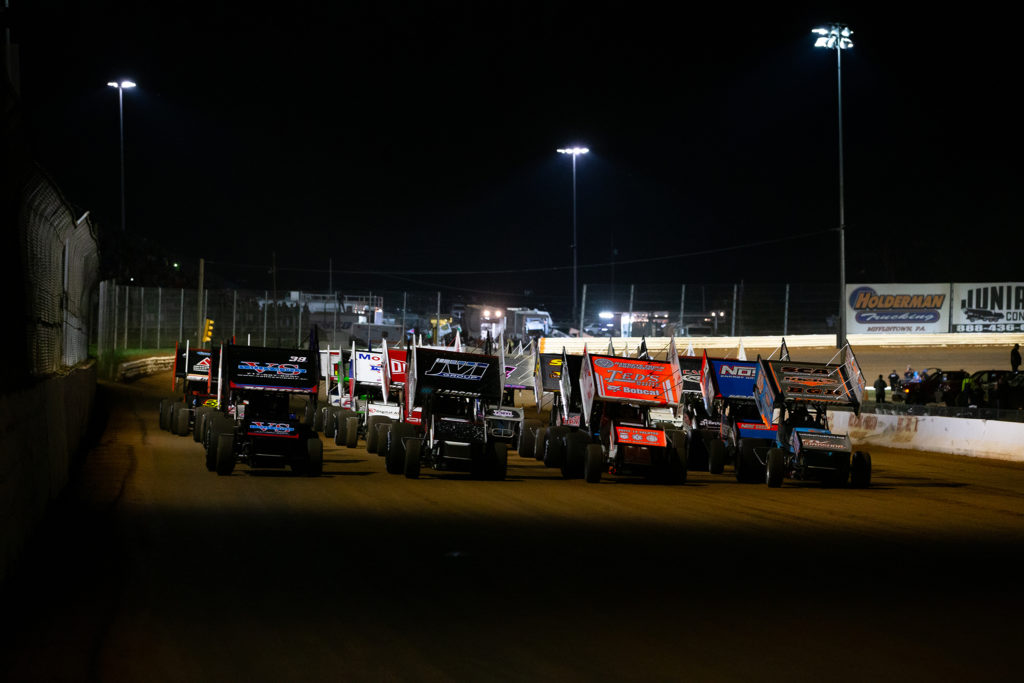 For the final time this year, the World of Outlaws NOS Energy Drink Sprint Car Series will square off against the Pennsylvania Posse, but this time at a new facility.

Six races at Williams Grove and a weekday show at Lincoln preceded the Nittany Showdown, but now the 1/2-mile at Port Royal Speedway stands in the spotlight with a doubleheader this weekend.

The likes of Sweet, Schatz, Gravel, Macedo, Schuchart & Haudenschild represent the Outlaws while the Posse bring in aces such as Dewease, Dietrich, Marks, Wagner, Macri & Rahmer.

A $15,000-to-win main event caps the weekend on Saturday night with Every Lap LIVE on DIRTVision.

RULING THE PALACE: When you think of Port Royal Speedway in 2021, you think of Logan Wagner and Lance Dewease; two men who want to and could likely dethrone the Outlaws this weekend.

Wagner, of Harrisonville, PA, is fresh off the biggest win of his life at September’s Tuscarora 50 against the All Star Circuit of Champions. He banked more than $56,000 at the event and also clinched his fourth consecutive track championship, tying a record set by Keith Kauffman 40 years ago. The Zemco #1Z pilot won three total races at the track this year but has two more opportunities left to beat The Greatest Show on Dirt this weekend.

Dewease, of Fayetteville, PA, is always commended for his dominance at Williams Grove as the all-time winningest driver, but his records at Port Royal are equally impressive. The Kreitz #69K driver won four races at the 1/2-mile this year, bringing him to 119 career victories and leaving him 10 short of the all-time record by Kauffman at 129 wins. The 55-year-old legend won twice at the speedway in the World of Outlaws Gumout Series in the early 2000’s, but still chases his first at the track against the NOS Energy Drink Sprint Cars.

MONEY MAN: Within the last month, Carson Macedo has undoubtedly experienced the greatest stretch of his career. The Lemoore, CA 25-year-old has won thrice over 30 days with the World of Outlaws, and they all three mark the highest paydays of his life.

The Jason Johnson Racing driver, who owns 10 wins this season and still battles for second in the championship has a chance to become the leading money earner this weekend with winnings of $10,000 on Friday and $15,000 on Saturday available.

CHAMPIONSHIP DRAMA: Williams Grove’s National Open had all the potential to create some chaos in the championship chase last weekend, and the Posse’s home porch lived up to that potential. Just when it looked as if David Gravel was set to take another huge chunk out of Brad Sweet’s advantage, the night and season drastically changed.

After cutting down 36 points last weekend, Gravel was expected to eat away more on Friday night when Sweet was forced to take his first provisional of the year. However, while running inside the top-10, a power steering issue slowed the Big Game #2 and handed Gravel a 25th-place DNF while Sweet advanced to 15th and padded more points.

POSSE AT PORT: We’ve been to Lincoln and Williams Grove, now we’re checking off one more Central Pennsylvania battle with the PA Posse this weekend at Port Royal Speedway. However, the Posse hasn’t won an Outlaws race at The Speed Palace since 2014 when Kunkletown’s Ryan Smith scored a popular first-career win. Interestingly enough, though, they’ve had six different drivers run second over the last six races; a streak they want to break this weekend.

POINTS BATTLE: Beyond the title fight, other positions in the championship standings are worth following as drivers battle for the lucrative points fund. Last weekend, Logan Schuchart (-292) used a pair of second-place finishes to overtake Sheldon Haudenschild (-320) for the fifth spot in points, which pays a record-setting $50,000 at season end.

In front of them, Carson Macedo (-142) used his National Open title to catch Gravel (-128) in a battle for the runner-up position. The difference from second to third in points includes a massive swing of $100,000 for second and $60,000 for third. It would be a career-best finish for both in the World of Outlaws standings.

THE THREE S’s: Sweet, Schuchart. Schatz. They were 1-2-3 in the championship last year, and they are the only three full-timers with a World of Outlaws win at Port Royal.

Sweet conquered The Speed Palace in 2015 in a Kasey Kahne Racing 1-2 finish over then-teammate Daryn Pittman. It was the first win in Central Pennsylvania for the Grass Valley, CA native.

Schuchart, who hails from less than two hours away in Hanover, won the 2016 show for his second-career World of Outlaws win. This weekend is his final chance of 2021 to match his grandfather Bobby Allen at 30 career wins while still in their home state of Pennsylvania.

Schatz has won more Outlaw shows at Port Royal than anyone else with four wins to his credit. The 10-time Series champion won in 2004 aboard his own Schatz #15 and then earned a three-peat with Tony Stewart/Curb-Agajanain Racing from 2017-19.

THE JONESTOWN JET: His first-career World of Outlaws win came at Williams Grove, but Kevin Gobrecht Rookie of the Year contender is most closely associated with Port Royal Speedway. Growing up an hour away from the Juniata County 1/2-mile, Zearfoss owns seven 410 wins at the track and won the 2017 track championship. That same year, he nearly got his second-career Outlaws victory at Port Royal.

He led 17 laps in a fierce battle with Schatz before ultimately running out of fuel with two-to-go while running second. Last year, he finished fifth and seventh at the 1/2-mile in World of Outlaws action. This weekend, he gets another chance at arguably his best track in pursuit of his first World of Outlaws top-five of the 2o21 season.

Around the Turn: The World of Outlaws NOS Energy Drink Sprint Car Series will enjoy a rare off-weekend after the trip to Port Royal with no racing planned for October 15-16. After that, the FVP Platinum Battery Showdown takes over Lakeside Speedway in Kansas City, KS on Friday, October 22.