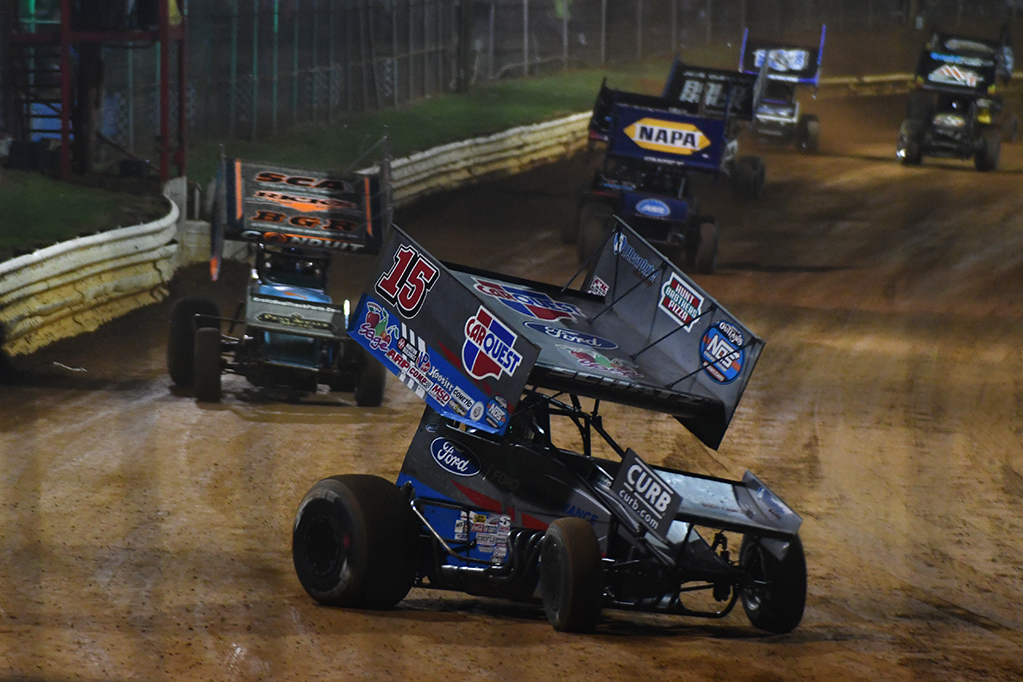 The most grueling schedule in Motorsports knows no rest. That’s why the World of Outlaws NOS Energy Drink Sprint Cars are set for another three races this week after tackling three nights last week.

After sweeping the PA Posse, the Outlaws now turn their focus to New Jersey and Ohio.

On Tuesday, Bridgeport Motorsports Park’s Kingdom of Speed re-joins the schedule as a newly-reconfigured 4/10-mile oval. When the weekend comes, it’s off to Ohio for back-to-back nights at Attica Raceway Park on Friday followed by Sharon Speedway on Saturday.

Here’s some of the most noteworthy storylines to follow this week:

ONE NIGHT ONLY: Tuesday’s stop at Bridgeport Motorsports Park will be the only race all season long in the state of New Jersey for the World of Outlaws Sprint Car Series. Fans from The Garden State can make the trek to Central Pennsylvania in July or October, but it won’t get any closer to home than this. Bridgeport is the third facility in New Jersey to host the World of Outlaws, alongside Flemington and New Egypt Speedway.

NEW CONFIGURATION: Although it has remained the same facility in Swedesboro, NJ over all these years, the layout of Bridgeport Speedway’s actual race track has changed on a handful of occasions. There was the original 5/8-mile speed plant which Sammy Swindell dominated with five wins in seven shows. Two years ago, the Outlaws raced on a renovated 3/8-mile smaller oval, and now they’ll face the reconfigured 4/10-mile for the first time on Tuesday night.

DOTY WARM-UP: Friday’s appearance at Attica Raceway Park in Attica, OH for the Kistler Engines Classic is a great opportunity to prepare for the Brad Doty Classic on Tuesday, July 13, which is the official kick-off to an epic week in Ohio. The prestigious Brad Doty Classic precedes four consecutive nights at Eldora with a pair of $175,000-to-win Kings Royal’s up for grabs. Donny Schatz (4 wins) and David Gravel (1 win) are the only active Outlaw winner at Attica.

LONG TIME NO SEE: Saturday’s show at Sharon Speedway ends a 14-year absence of the World of Outlaws from the Hartford, OH 3/8-mile. The exact span since that last appearance won by Steve Kinser on June 1, 2007? A long 5,105 days.

Although none of the active drivers have won at the track in World of Outlaws competition, several drivers still have winning experience at Sharon to rely on. Both Aaron Reutzel and Sheldon Haudenschild have topped All-Star Circuit of Champions race, while Brad Sweet also owns a 2012 Lou Blaney Memorial title from the track.

POSSE INVASION: The Outlaws made it out of Pennsylvania with a clean 3-0 sweep last week, beating the Posse at Lincoln and both nights at Williams Grove. However, they haven’t completely dispatched themselves of the Central PA gassers yet. Located just over two hours away, Bridgeport’s $10,000-to-win allure is just enough to pull the Posse off the porch and add some extra spice to the mid-week showing.

Among the leading PA Posse stars expected to run is Danny Dietrich of Gettysburg, PA, who beat Donny Schatz to win at Bridgeport in 2019. Brent Marks of Myerstown, PA has three podiums over the last 10 days since re-joining his family-owned #19, and ran top-five at Bridgeport in April. Additional threats like Anthony Macri of Dillsburg, PA and Freddie Rahmer of Salfordville. PA are expected to be in attendance as well.

POINTS TIGHTEN: A long and unpredictable 60 races remain, but nonetheless, the championship standings are as tight as they’ve been in more than a month. Two-time and defending champion Brad Sweet continues to lead the way aboard his Kasey Kahne Racing, NAPA Auto Parts #49, but the competition closing quickly after a rough spell for the Grass Valley, CA native.

HOME SWEET HOME: Wooster, OH native Sheldon Haudenschild relishes every chance he gets to compete in his home state of Ohio. Lucky for him, he gets two opportunities this weekend.

Within the past year, Haudenschild has nabbed wins at Wayne County Speedway in Orrville, OH and Eldora Speedway in Rossburg, OH. This weekend, he has Attica and Sharon on the agenda. Both are tracks where his legendary father Jac Haudenschild has found victory lane before, and Sheldon himself has won with the All-Stars at each facility too.

That’s a top-1o in almost 75% of his starts dating back to 1995. Up next? That elusive first win of the season for the Tony Stewart/Curb-Agajanain Racing #15.

Tuesday, May 18 at Bridgeport Motorsports Park in Swedesboro, NJ
Friday, May 21 at Attica Raceway Park in Attica, OH
Saturday, May 22 at Sharon Speedway in Hartford, OH

Around the Turn: Following this weekend, the World of Outlaws NOS Energy Drink Sprint Car Series will return to Indiana for a Memorial Day Weekend at Terre Haute Action Track on Friday, May 28 and Lawrenceburg Speedway on Monday, May 31.