WHAT TO WATCH FOR: Independence Day Spectacular at Cedar Lake This Weekend 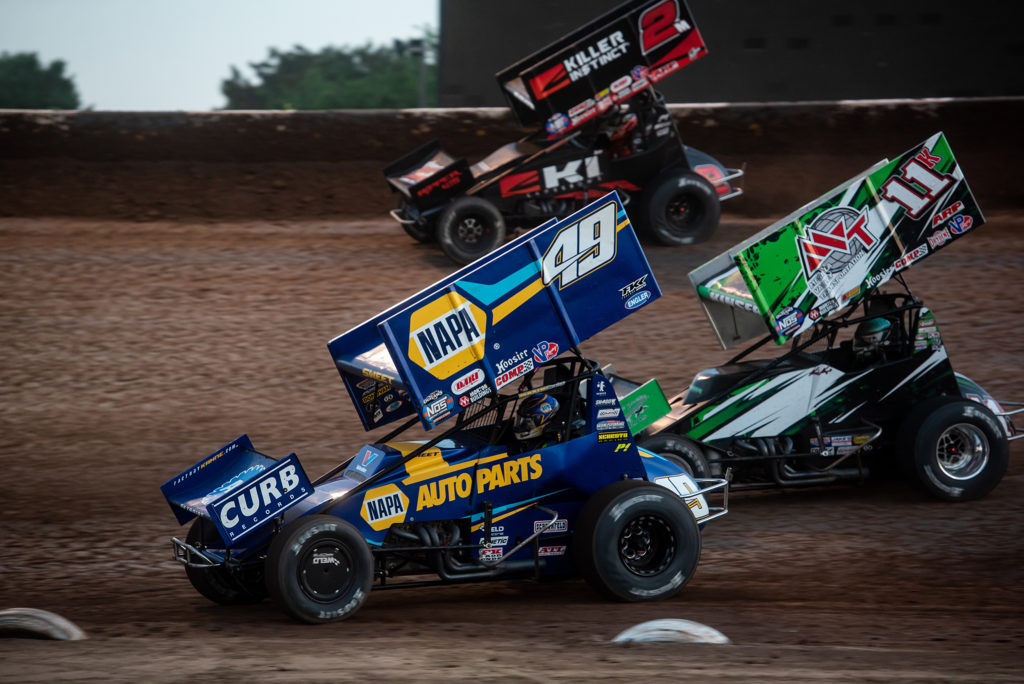 June was action-packed, and July is going to be even bigger.

The World of Outlaws NOS Energy Drink Sprint Car Series kickstarts the busiest month of the 2021 season this weekend with an Independence Day Spectacular at Cedar Lake Speedway on Friday and Saturday, July 2-3.

TURNING THE PAGE: On the heels of the busiest stretch of the season (8 races in 11 days), the Greatest Show on Dirt now prepares for the busiest month of the season. A loaded July features 13 races at eight different tracks in four states. Included in that stretch is a run of five races in five nights, highlighted by a historic happening with not one, but TWO Kings Royal Features paying $175,000-to-win each.

CHOMPIN’ CHECKS: $50,000 yields not only a big bank deposit, but loads of momentum and confidence as well. After their second-straight Jackson Nationals title, Logan Schuchart and the Shark Racing #1S will walk into Cedar Lake Speedway with an extra pep in their step this weekend.

The Hanover, PA native has previously won at the Wisconsin oval in 2016. He’s chasing his 27th career World of Outlaws win, the fourth of his 2021 season aboard the Drydene Performance Products sponsored machine.

ON FIRE: On May 7 at Eldora Speedway, Kerry Madsen took the wheel of the Tony Stewart/Curb-Agajanian Racing #14 for the first time. Ever since then, he’s been the hottest Sprint Car driver in the world. This weekend, he returns to one of his best tracks at Cedar Lake, too.

“The Mad Man” has contested 14 World of Outlaws events aboard the Advanced Auto Parts #14 and has only finished outside the top-10 ONCE in his second race. His average finish is a whopping 4.6 over that stretch, and he’s racked up six podiums in the last nine races. Last weekend, he finally broke through for his first Outlaws win aboard the #14 and promptly followed that with another trip to victory lane the next night at Jackson Motorplex.

This weekend, Madsen returns to Cedar Lake Speedway, where he’s won thrice before with The Greatest Show on Dirt.

KNOWING WHAT IT TAKES: Four full-time competitors have previously won with the World of Outlaws Sprint Car Series at Cedar Lake Speedway. Leading the way among that group is 10-time Series champion Donny Schatz, who has triumphed on five occasions at the track, only two shy of Sammy Swindell’s record of seven wins.

Lately, it’s been The Big Cat’s playground. Brad Sweet has topped four of the last six races at Cedar Lake with a chance to extend that record this coming weekend. Other former winners at the 3/8-mile oval are Sheldon Haudenschild and Logan Schuchart

NEW TO NEW RICHMOND: Two of Sweet’s biggest championship challengers will look to end their cold spell when visiting Cedar Lake Speedway this weekend. David Gravel and Carson Macedo, who run second and third in the points, are both chasing their first career World of Outlaws win at the track.

ROOKIE RACE: It’s been 32 races since James McFadden of Alice Springs, NT, AUS made his way to the United States and began his rookie campaign with the World of Outlaws Sprint Car Series. After missing the opening six races, J-Mac has made the most of his time since climbing aboard the Kasey Kahne Racing, Karavan Trailers #9 in a full-time capacity. This week, McFadden moved into eighth-place in the championship standings, only one spot and 296 points behind fellow rookie, Aaron Reutzel.

Although points are not the deciding factor in who wins the Kevin Gobrecht Rookie of the Year, they certainly still hold merit. If you measure the standings since March 19 when McFadden made his first start, he’s actually ahead of the Roth Motorsports #83. Over that span, J-Mac has outscored A-Aron by 46 points.

The win column is worth looking at just as much, though. McFadden’s lone victory was at Kokomo (IN) Speedway in April, while Reutzel has claimed three wins including a spectacular drive at East Bay (FL) Raceway Park, a $15,000 pouncing on the Posse at Williams Grove (PA) Speedway, and a $30,000 score last week at Huset’s (SD) Speedway.

HALFWAY HOME: This weekend’s doubleheader at Cedar Lake will bring the 2021 season to 40 completed events of a scheduled 81 in total. The championship standings remain relatively unchanged following a big week with five races as part of THE SHOWDOWN.

Immediately behind Sweet is David Gravel (-60) who has six wins in his first season with the Big Game Motorsports #2 crew. The next group of challengers includes Carson Macedo (-120) with three wins for Jason Johnson Racing, Sheldon Haudenschild (-172) with three wins as well in the NOS Energy Drink #17, Logan Schuchart (-190) fresh off a $50,000 victory last weekend, and Donny Schatz (-202) who earned his 300th career win last week.

Around the Turn: Following this weekend, the World of Outlaws NOS Energy Drink Sprint Car Series will head to Wisconsin’s Wilmot Raceway for one-night only on Saturday, July 10. After that, a huge five races in five days awaits with the Brad Doty Classic and TWO Kings Royals offering almost $400,000-to-win.