WHAT TO WATCH FOR: 2021 Season Concludes at Charlotte’s World Finals 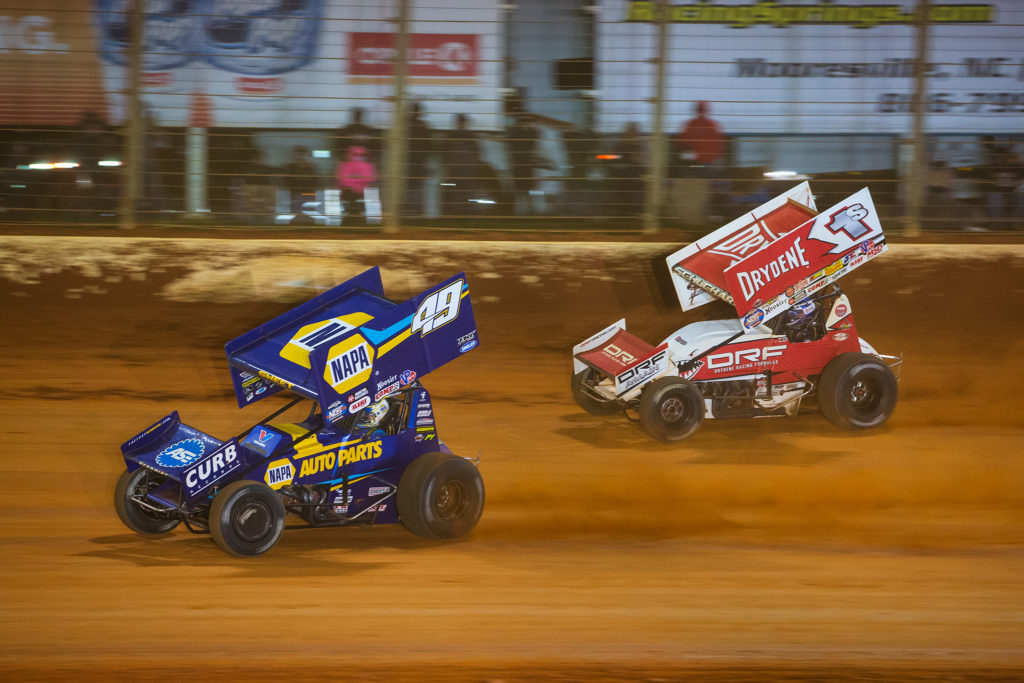 It’s been a grueling nine-month path from coast-to-coast, but we finally made it. Welcome to the NGK/NTK World Finals.

The Dirt Track at Charlotte staple has been the season finale for 15 years now, serving as a must-see event with the World of Outlaws NOS Energy Drink Sprint Cars, World of Outlaws Morton Buildings Late Models, and Super DIRTcar Big Blocks all merging together in one pit area for one epic weekend.

The festivities begin on Wednesday night with a Kickoff Party at the ZMax Dragway next to The Dirt Track. Fans can enjoy a special “PRN at the track” show from 6:30pm to 8:00pm with driver appearances, Q&As, and live music with Dirty Grass Soul playing from 8pm to 10pm.

On Thursday, on-track action begins with Hot Laps and two rounds of Slick Woody’s Qualifying for the NOS Energy Drink Sprint Cars, as well as other racing events for Late Models and Big Blocks.

Two full racing programs for all three divisions will follow as Friday features the iconic three-division, four-wide salute, and then Saturday sees the crowning of champions in each class.

There’s a lot to look forward to, so here are some of the top storylines:

THREE-PEAT: The unofficial becomes official this week as Brad Sweet and Kasey Kahne Racing will secure their third consecutive World of Outlaws championship.

The dynasty of the NAPA Auto Parts #49 team continues to be on full display with The Greatest Show on Dirt, proven by their prowess in a 2021 season which many dubbed as the deepest field in Series history. Through 78 races ahead of World Finals, Sweet leagues the lead in Feature wins (16), laps led (333), podium appearances (34), top-five finishes (47), and average finish (5.37). Another critical factor in his march towards the title is that he’s the only driver to complete all 2,505 laps this season.

The Big Cat, a Grass Valley, CA native, will be completely transparent with you, though, and admit the 2021 season was partially a letdown for the KKR #49 squad. Yes, they’re full-timers with the Series and obviously pursue the $150,000 championship (upgraded to million-dollar points fund in 2022), but first and foremost they want the Crown Jewel wins. They want to take the Knoxville Nationals and the Kings Royal’s of the world, but it just wasn’t meant to be this year.

Nonetheless, another phenomenal year with Sweet joining Steve Kinser & Donny Schatz as the only men to ever win three straight titles with the World of Outlaws. Although the points are irrelevant, there is still plenty to fight for this weekend as Sweet chases his first-ever win at The Dirt Track at Charlotte.

DOUBLE DOSE: One of the most unique aspects of the NGK/NTK World Finals is two rounds of Slick Woody’s Qualifying on Thursday night at the North Carolina 4/10-mile oval. To ease the weekend schedule with three premier divisions on the scene, the NOS Energy Drink Sprint Cars will receive Hot Laps followed by a Friday session and a Saturday session of two-lap qualifying on Thursday evening.

BATTLE FOR THIRD: The closest battle in the World of Outlaws Sprint Car Series point standings is the fight for third-place between Carson Macedo’s Jason Johnson Racing #41 and Donny Schatz’s Tony Stewart/Curb-Agajanian Racing #15. The unique pair of opposites enter World Finals weekend separated by a mere four points with Macedo owning the edge.

It’s been a remarkable, almost unbelievable first-year campaign with JJR for Macedo of Lemoore, CA. The 25-year-old contested his third full season with the Series and set career-highs in literally every single statistical category. His 11-win season was highlighted by the $75,000 National Open, $25,000 Skagit Nationals, $21,000 Tom Tarlton Classic, and multiple victories at Knoxville, Eldora, and Williams Grove.

For Schatz, it’s been quite the opposite. The 10-time Series champion has grown accustomed to standing or at least being near the mountaintop, but there’s none of that in 2021. DNF’s through the first half of the year made his outstanding second-half surge null as the Fargo, ND native tried to claw his way out of a deep hole. The Charlotte master has won a record 13 races at the track and looks for more this weekend as TSR collects momentum heading into a hopefully resurgent 2022 season.

DIALED IN: Lately, when it comes to The Dirt Track at Charlotte, two men stand above the rest of the competition. Over the past five events, David Gravel and Logan Schuchart have worked together to completely lock everyone else out of victory lane.

Schuchart, who enters as the most recent Series winner from a $20,000 score at Devil’s Bowl last weekend, is also the most recent winner at The Dirt Track as he topped the 2020 finale dubbed as “Last Call.” The Hanover, PA native also drove the Shark Racing, Drydene Performance Products #1S to Charlotte glory during the 2019 and 2017 Patriot Nationals in May.

Gravel was extraordinary at the 4/10-mile when driving for Jason Johnson Racing over the past two years, collecting a 2019 World Finals sweep and marching to a third straight win in 2020. He even has a fourth Series victory at the track from 2017 when he piloted the CJB Motorsports #5. Now the championship runner-up is set to cap a stellar year one with the Big Game Motorsports #2 this weekend.

FINISHING STRONG: For the rest of the Outlaws, World Finals offers a chance to end their year on a high note and build some momentum ahead of the short off-season and carry that into the 2022 season.

All seven of these drivers are in pursuit of their first-career win at The Dirt Track at Charlotte:

INVADERS ARRIVE: A whole crew of certified gassers is expected to make the haul to Concord, NC for this weekend’s season-ending event for the World of Outlaws Sprint Car Series. The doubleheader of $12,000/Win Features has turned into a destination event with teams from all across the country reuniting for one final time each year.

Spencer Bayston and CJB Motorsports will conduct their final weekend without platinum status as the pairing is set to go full-time with the Series in 2022. A 23-year-old Lebanon, IN native, Bayston won his first two career races this season and is amped up for a run at the Kevin Gobrecht Rookie of the Year Award in 2021 with the #5 team.

King Sunshine AKA Tyler Courtney eyes to conclude a sensation season in the winged world after earning the All Star Circuit of Champions title with Clauson-Marshall Racing. His NOS Energy Drink #7BC will have a hard time topping the $175,000 check from King’s Royal, but a second Outlaws score would certainly be welcomed in Charlotte.

Also in action is Shane Stewart back in the Team Trackhouse themed #71 by Indy Race Parts, Parker Price-Miller now at the Sam McGhee Motorsports #11, the PA Posse’s Danny Dietrich coming off the porch for a fun weekend, Brian Brown making the haul from Missouri to the site of his first career win, and Brent Marks set to debut his new ride with Murray-Marks Motorsports, among other drivers.

BEST OF ALL THREE WORLDS: The NGK/NTK World Finals is the one and only time you’ll see all three premier divisions of World of Outlaws Sprint Cars, World of Outlaws Late Models, and Super DIRTcar Big Blocks collide at the same track.

The Most Powerful Late Models on the Planet are led by Brandon Sheppard, who is set to claim his fourth consecutive title with Rocket1 Racing. He brings notables such as Chris Madden, Ricky Weiss, Brandon Overton, Tim McCreadie, and others along with him to Charlotte this weekend.

Don’t forget about The Beasts of the Northeast either, as full-time stars such as champion-elect Matt Shepard, Mat Williamson, Bill Decker & Peter Britten welcome outsiders like McCreadie, Billy Pauch Jr, and Mike Gular, among others to do battle on the Queen City clay.

Thursday-Saturday, November 4-6 at The Dirt Track at Charlotte in Concord, NC