Each week throughout the season we will provide a Q&A with a team member within the World of Outlaws Sprint Car Series. This week we chose Scott Gerkin, who is the longtime crew chief for Steve Kinser.

Background: Scott has been involved in sprint car racing for more than 30 years. While he has crewed for “The King” since 1995, Gerkin spent time working for Karl Kinser in the 1980s. He also crewed for Mark Kinser and Kenny Jacobs among others. 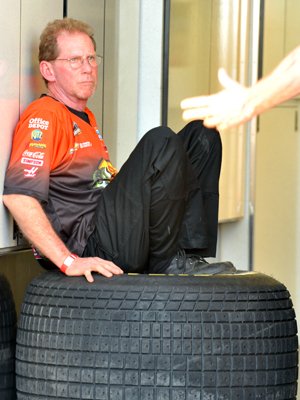 How did you get hooked up with Steve Kinser?

“That actually would have been through Karl. I went to work for Mark’s car in 1983 or 1984 when Mark first started going on the road. That’s my first experience of actually traveling and running all over the country.”

How have you seen the sport change in the past three or four decades?

“The racing to me is really a lot the same as it was then. Sprint car racing is still probably one of the few sports that I would have to say is still mainly driver. It’s probably 80-to-90 percent driver. A lot of things on the cars have changed like the shocks have gotten really important in the last seven or eight years. The aerodynamics of the car and of course the horsepower part of it. That never changes. You’re always constantly trying to make more horsepower with them. And then figuring out how you can use it.”

What is your proudest memory?

“I would have to say for me it would have been the first year that we ran Steve’s car. He had went to drive Kenny Bernstein’s NASCAR car. He ran the first part of that year and decided he wasn’t going to like that very well. So he decided to run his own team. We pretty much built a race team from the ground up in probably a month and a half.

“The first year we ran second at the Kings Royal, we won the $100,000 to win at the Historical Big One at Eldora, we won the Knoxville Nationals and we won Syracuse that year. We won 18 or 20 races that year. That was probably the thing I’m the most proud of.”

What is a change you’d like to see in sprint car racing?

“I would like to see a corporate sponsor on every car and every team to have the funding they need to do this. It is really expensive for no more sponsorship than there is in it. You’re talking six, seven, eight-hundred thousand a year to run these cars. To travel and to do it right. There’s a couple of cars out that does. Most everybody else pretty much is struggling. And honestly even in our situation it’s somewhat of a struggle for us. It’s really hard to have the funding to do this the way you need to do it. We’re doing a lot for no more income than there is.

“The guys that work on these things, most of them work for nothing. … you’re talking 70 and 80 hours a week and sometimes maybe more. All the guys I know on this deal really work their asses off and they don’t get paid what they should. You’ve got to love to do it. It’s a tough sport. There isn’t anything about it easy.

“I’ve been able to do this my whole life and made a living doing it. I haven’t gotten rich by no means, but I have made a decent living and supported my family, and I’ve had a good life doing it. I love sprint car racing. I’m a sprint car fan.”

How much longer do you think you’ll be doing this on-the-road stuff?

“It’s hard to say. You never know how things will work out. We’ve kind of tried to work toward a future when Steve and I both quit of maybe having a motor shop here where we could build motors for other teams. We’ve kind of been gearing ourselves up for that, but when we decide we’re going to quit, who’s to say.

“We don’t win as many races as we used to, but it’s tougher competition than it used to be, too. We both still love it and we love going at them every night.”

For more information about Scott, Steve Kinser and the team, visit http://stevekinser.com. For more on the World of Outlaws, click http://woosprint.com.

If you have a question for a team member within the World of Outlaws Sprint Car Series, e-mail PR Coordinator Shawn Miller at [email protected] with the person’s name and a question or two. We will do our best to provide inside access from as many people as possible during the 2012 season.