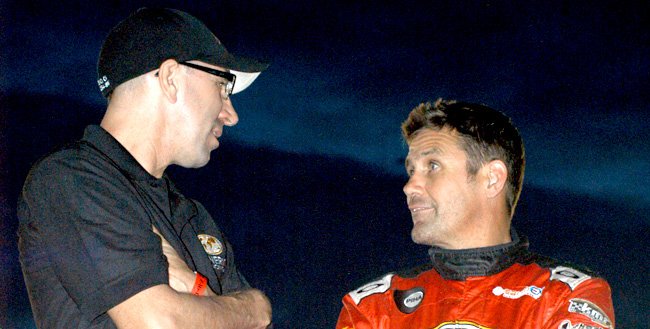 Each week throughout the season we will provide a Q&A with a team member within the World of Outlaws Sprint Car Series. This week we chose Rob Hart – a veteran around the pits and the crew chief for Kerry Madsen.

Background: Rob went to his first race when he was only 8 days old. Since then he has spent countless hours at the track as a fan, driver and a crew member. After a 20-year career as a driver ended in 1996, Rob has worked on a variety of sprint car teams competing on the World of Outlaws tour.

Off the top of your head, what drivers have you been a crew chief for?

“Pretty much all of them. That’s one of my fortes. I can get a job; I just can’t keep it. I’ve worked for Jeff Swindell, Joey Saldana, Shane Stewart, Brad Furr, Craig Dollansky, Kevin Swindell, Danny Wood, Danny Lasoski, Tony Bruce Jr., David Gravel. There’s been more.

“If I’m not working for somebody, usually I’m the guy that they call that goes to Australia or if they’re just getting in a new deal or just trying to wrap up the season, I’m one of the guys they call.”

What keeps you going out on the road from race to race?

“Besides the fact that I like the sport, I like the competition, I like the cars and I’m a gearhead … that’s kinda what it is. But mainly it’s to win; to perform the best. It’s harder now that I’ve got kids and a wife so it’s harder to be away.”

What is the biggest difference that you’ve seen from the 1970s to what sprint car racing is today?

“The money involved. It was expensive before, but now it’s substantially more expensive. With that comes more pressure to perform. A lot of guys have spent a lot of money and have a lot invested. The pressure is far greater today than it was before. It’s become more of a profession.”

Where do you see the sport of sprint car racing headed?

“The guys that are here are spending more than they ever have. There’s more money now than ever. I think public relations-wise they’ve got to be on TV. Even for just rich car owners. They like to watch their cars. If they have to handle businesses then they don’t get to get out that much. And as for a mechanic … friends of mine are home and want to keep up with me and want to see me on TV.”

What do you think is the best thing about your job?

“When you win. That’s the best thing. You get to see a lot of places and travel a lot. When I traveled with my wife we always made it a point to go and see things. We’d always take the day and go to parks, museums, whatever is available. In the 10 or 15 years I’ve been doing that, or however long it has been, I’ve seen all kinds of stuff. So that’s probably the best thing besides the racing.”

For more information about Rob, Kerry Madsen and the team, visit http://KerryMadsen.com. For more on the World of Outlaws, click  http://woosprint.com.

If you have a question for a team member within the World of Outlaws Sprint Car Series, e-mail Public Relations Coordinator Shawn Miller at  [email protected] with the person’s name and a question or two. We will do our best to provide inside access from as many people as possible during the 2012 season.