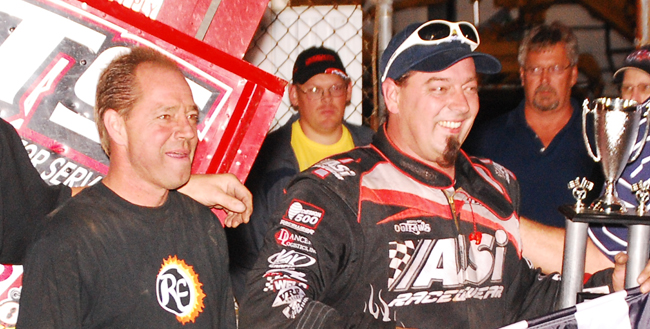 Throughout the season we will provide Q&As with team members within the World of Outlaws STP Sprint Car Series. This week we chose Paul Sides, who is a former driver and the lone full-time crewman for his brother, Jason Sides.

Background: Paul is a former sprint car driver and at one point he drove the World of Outlaws STP Sprint Car Series two-seat sprint car at select events. Nicknamed “Worldwide” for his adventurous spirit, Paul has dedicated himself full time the past couple of years on his brother’s – Jason – team.

How did you get to this point in your career?

“J and I grew up racing together. It’s been about 18 years ago we started racing. Just recently I kind of retired and came to help J. When you’ve got somebody who’s driven before, they kind of understand a little bit more than someone who’s never set in the seat. I kind of know what he likes.” 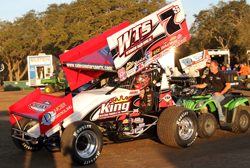 “Don’t get me wrong, I’d like to be driving. But I think we make a good combination, driver-crewguy. There’s a couple of different sets out there that’s done it like that and it works real good.”

Take us through an average race day for your team.

“We’re not ones to get up at the crack of dawn. Of course, we stay up late. After a race night we go to the car wash, do all your postrace stuff. We’ll get to the track as soon as we can. If you’re on the road doing like we are when you have a night off, get your maintenance done the next day so you have as little to do at the track as possible. From race time until it’s over, basically we do whatever everybody else does. A lot of times it’s just me and J. It gets kind of hard sometimes, but we do it.”

What is your best skillset that you have developed over the years?

“You’ve pretty much got to multitask. You’ve got to do a little bit of everything. We work good together. I do all the tires. J does all the motors. We share the maintenance deals. We try to make it as simple as possible so it’s not that hard on two of us. J does a lot of work. For driving the car, driving the rig, he washes the car. There’s not a lot of drivers who do that. It’s a four-man operation in a two-man deal.”

How do you contrast working so hard versus having fun on the road?

“If you’re not enjoying what you’re doing then there’s no sense in you being out here. Over the winter we went to Australia. We got to see a lot of the sites we hadn’t been able to do before because we were there for so long. We got to do a lot of traveling. We went to I think seven different cities and saw more than we had in the past. We were there for a month and out of the month we raced 12 or 13 times and the rest of the time we did the tourist thing. In the states here, you don’t really get to do that. You’re in a big rig so you don’t get to stop at every little town and stop and sightsee.”

What would make this season a successful year for the team?

“Just to finish good ever night. The nights you don’t, you can’t let that get you down. Just to finish in the top 10 in points would be a successful year to me. To J, he’s wanting to go for top five, maybe better. Just to win races, to be there and do good every night and have a good time doing it.”

For more information about Paul and Jason Sides, visit SidesMotorsports.com. For more on the World of Outlaws STP Sprint Car Series, click WoOsprint.com.

If you have a question for a team member within the World of Outlaws STP Sprint Car Series, e-mail Public Relations Coordinator Shawn Miller at [email protected] with the person’s name and a question or two. We will do our best to provide inside access from as many people as possible during the 2013 season.