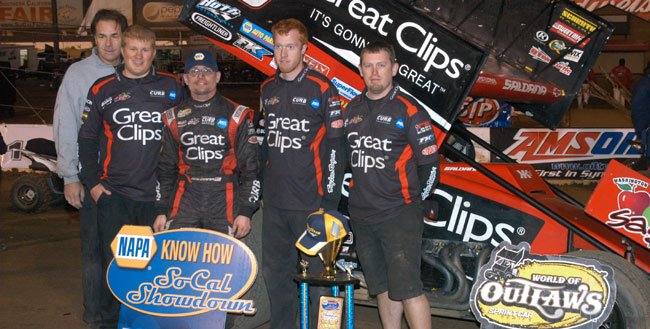 Each week throughout the season we will provide a Q&A with a team member within the World of Outlaws Sprint Car Series. This week we chose Kale Kahne, who is the crew chief for veteran Joey Saldana.

Background: Kale was born into sprint car racing in the small town of Enumclaw, Wash. His father, Kelly, owned a sprint car team with various drivers and his older brother, Kasey, is a proven NASCAR star. Kale began his World of Outlaws experience in 2001 when he helped Mark Kinser. Last year Kale earned his first crew chief position for notable Joey Saldana.

Take us through the last decade.

“In 2001, in the summer of my junior year of high school, I worked for Mark Kinser. The next year after I graduated I came back and finished the whole year with them. In 2003, I went and drove Kasey’s motorhome in the (NASCAR) Busch Series. In 2004, he went to Cup and I drove his motorhome until 2007.

Did you crew for Kasey when he was racing sprint cars full-time?

“A little bit. When he was in sprint cars, I was still in high school. He was always out here and I was always back in Washington. I always played sports. Like football was during racing season. I never really got to come back too much because it was such a long way. I wasn’t with him too much when he was racing winged cars.”

Would you consider yourself a crew guy when you were growing up? 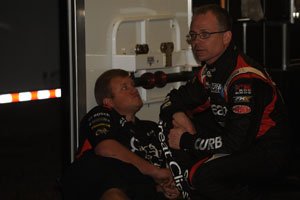 What is your goal in sprint car racing?

“My goal this year is to win as many races as I can and hopefully win the points championship if we’re close enough at the end. And win the Kings Royal and the Knoxville Nationals. Those are two big races that I’d really like to win. And one race at Williams Grove. It doesn’t matter which one. We’ve struggled a little at Williams Grove as a company and just to win a race at Williams Grove would be huge for me and our whole team.”

What about five years down the road?

“I’ll be a crew chief as long as I can, as long as people will have me. I don’t want to own a car. There are a lot of headaches in that and I don’t have nearly enough money to do it. I like being a crew chief. I like the stress. I like the anxiety and everything. Also, I want to have a family and I know it will be really hard to have a family while working on the road.”

What is a misconception about you?

“A lot of people think I’m in the position I’m in because I’m Kasey’s brother, which it might have a part of it. But if I didn’t perform, or me and Joey as a team didn’t perform, then I wouldn’t be in this position. And Kasey as an owner being your brother, he treats you a little different than the others; in a good way sometimes and also in a bad way. If he’s having a bad day I’m going to hear about it.”

Did you ever race?

“No, I never drove anything. I thought about it a few times when I was younger and actually wanted to a little bit. Kasey moved so quick that me helping him and everything … by the time I wanted to race I was too old. I’m a little bigger; I’m 220 pounds, so I don’t think I’m the perfect size for a sprint car driver.”

Have you ever suited up and drove a sprint car on a play day?

“Naw, I never have. Actually, I had never even started a sprint car until last year. I’ve never taken a few hot laps. I actually think it’d be pretty fun to do that. We need to rent a track and do that one day, just go have fun.”

For more information about Kale, Joey Saldana and the team, visit KaseyKahneRacing.com. For more on the World of Outlaws, click WorldofOutlaws.com.