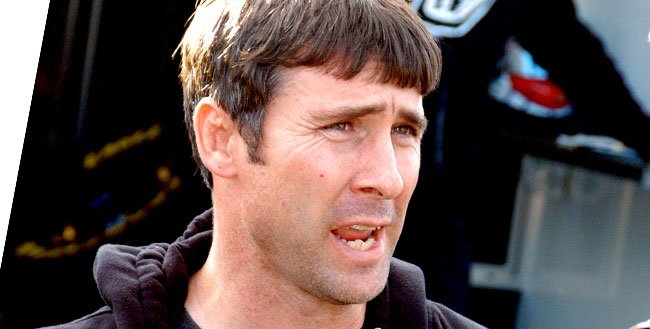 Each week throughout the season we will provide a Q&A with a team member within the World of Outlaws Sprint Car Series. This week we chose veteran Justin Adams, who is the crew chief for Cody Darrah and also serves as team manager for Kasey Kahne Racing.

Background: A native of Pennsylvania, Justin grew up watching sprint car racing in a rich culture, which instilled a desire to be around the sport as he became older. After a year of wrestling in college wasn’t what he expected, Justin ventured onto the sprint car circuit and is nearing his 20-year mark as a crewman.

How did you become interested in sprint car racing?

“Growing up in Pennsylvania, it’s a huge sprint car area around Lincoln (Speedway) and Williams Grove (Speedway). I grew up going and watching the races as a kid. I got to hanging out with Steve Siegel and started racing with him, and it just grew from there. My first full-time racing job was Joey (Saldana’s) first time driving job with Tim Hughes in 1994. We went out on the All Star tour together. I worked on that car with Steve Siegel and Joey drove it.”

How old were you then?

“I was actually a year out of high school at that point. I went to college on a wrestling scholarship and I didn’t like where I was at. So I took a little bit of time off, took two years off, and went racing. After that I went back to college at Pittsburg-Johnstown and my summer job was racing.”

Did you ever drive at all?

“Never drove. I never really had a passion to drive. I was always kind of intrigued by the cars and the mechanical part of it. Where I grew up there were just a lot of local race shops and I always would ride my bike to them or walk around and check them out. I was intrigued by the cars – how they were built and what makes them go.”

How long have you worked for Kasey Kahne Racing and how has your role evolved?

“I’ve been with KKR since 2005. From Day 1 we’ve kept getting bigger and bigger and bigger. I’ve known Kasey for a long time. We’ve always kind of been family or close friends. When he came out on the road racing … my brother is actually married to his sister … they became close friends. It was both their first year out on the road traveling. So we always hung out and the same way with Willie (Kahne). We always talked about if any of us made it big we were going to have an Outlaws team and do this and that.

Can you give us a rundown of the drivers you have crewed for?

How have you seen the sport change in the past two decades?

“I feel like it’s still one of the last forms of racing where the driver is one of the biggest parts of the equation. When I first started, when we traveled there was no ‘Corporate America’ out there so everybody was a lot closer together and everybody kind of ran around together. Now everybody still gets along, but we’re all isolated and kind of stick to our teams. That’s probably the biggest thing I’ve seen change over the years.”

What is something that the average fan might not understand or know about Cody?

“Running the World of Outlaws deal is a very difficult task. I’ve been around it long enough to watch Joey progress from the start to where he’s at now; Donny Schatz, Jason Meyers, all these young guys. When they were at Cody’s age or at the same time frame as Cody is in, they were tearing up the same amount of stuff. It takes a toll on you. To go and race in Pennsylvania every night, there’s similarities, but you’re not traveling. You’re going to the same tracks all the time. Out on the road you’re going to somewhere different all the time. You’re constantly having to adapt to something different. He’s picking it up very quickly. He definitely is progressing faster than most I think.

“And he takes an awful lot of flak. Those other guys I mentioned, they didn’t start racing in the social media age. They just got beat up by second-hand information. Cody is reading all this stuff via Twitter, Facebook and Hoseheads. It’s very easy to get on the Internet and post something negative and there’s no consequence to it. It’s a tough pill to swallow and I feel like he’s handled it very well.”

How do you juggle having a family and being on the road?

“I have a wife and three kids. My daughter is 8, so she’s in school. If I’m gone for two weeks, I’ll go home for a week. That’s one of the benefits of working for Kasey. He is very understanding about the family part of it all. When I need to come home, I work on stuff at the shop. Once school gets out in the summer time, they come out on the road quite a bit. It’s not easy, but I feel like I’m living a good life and providing for my family and everybody is happy.”

For more information about Justin, Cody Darrah and Kasey Kahne Racing, visit KaseyKahneRacing.com. For more on the World of Outlaws, click WorldofOutlaws.com.