Each week throughout the season we will provide a Q&A with a team member within the World of Outlaws Sprint Car Series. This week we chose Diane Schatz, who operates the merchandise trailer for her son, Donny Schatz.

Title: In charge of merchandise trailer

Background: Diane has been involved in the World of Outlaws sprint car scene since her son, Donny, began competing full-time on the tour in 1997. She has traveled full-time and been in charge of Donny’s merchandise, including the souvenir trailer, for nearly the past decade. 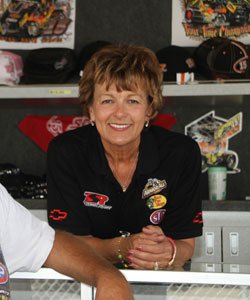 What is your role within Donny’s program?

“I manage the vending trailer for Donny at all of the World of Outlaw events. Just like every parent out there, you’re kinda in a supporting role for your children even when they get to be 34 years old.”

How long have you done that?

“Donny started with the World of Outlaws in 1997 and we’ve had some presence from the very beginning. The last eight or nine years we’ve been out there full-time with the vending trailer for him. And it helps to promote him also. You’ve got to have a presence for people to know who you are.”

Who is in your merchandise trailer with you?

“We have some fans from around the country … that from time to time when I need help they are more than willing to help out. Of course my husband is right there if he can make it in from the pits and I need help. He checks on me several times to see if I need anything or to offer me relief.”

Are you completely in charge in terms of design and ordering the merchandise?

“I have to get approval from Tony Stewart Racing to make sure that when we order a t-shirt that I don’t have something on the shirt that shouldn’t be there and that our sponsors are taken care of with the latest logos. TSR has to put their stamp of approval on anything that I put in the trailer.

“There’s a little difference between the sponsors from Stewart-Haas to Tony Stewart Racing. It’s little things like that that I’ve got to make sure I’ve got right and don’t do anything to intrude on SHR versus Tony Stewart Racing. They’re just protecting their sponsors and NASCAR’s got so much licensing stuff going on that we have to be more careful than I did before when we were Donny Schatz Motorsports.”

How do you come up with fresh ideas for merchandise each year?

“When it comes to ideas, there’s a lot of fans that will come up and give you ideas on things that might sell. I try to pick up on that. Some ideas I’ve tried and they’ve failed and some things turn out well. Of course there are trends out there all the time for this or that, so you’re trying to keep up with what’s going on out there; always looking for ideas.

“If I’m going to go to an event, naturally I want to have as much on-hand to sell because different things appeal to different people. We’re going into different venues all the time. There’s a big difference between going to Charlotte Motor Speedway than there is to going to the Bloomington, Ind., track. Over the years you kind of track where you’re going and what you need to have. You get a little smarter all the time.”

Do you get the chance to watch any of the races?

“I really enjoy watching the World of Outlaws sprint cars. I thoroughly enjoy it. I always have. Anytime I get a chance to watch, I sure do. And everybody that’s out there is really good about helping each other out. Whether it’s the Kinsers or Saldanas or Dollanskys or whoever it might be, everybody kinda feels the same. They want to watch, too. So everybody is good about trading off and helping each other out.”

What is the biggest challenge that you’ve seen being around the sport?

“I think the biggest challenge that I see is that I don’t know that a lot of the fans realize the level of intensity that those drivers have every time they suit up and buckle up and go in that car. And when things don’t go right, whether it’s a lapped car that comes into play or mechanical failure or something silly that just plain happens, I don’t think the average person realizes the intensity of the drivers and they forget that these guys are doing something that they’re very focused on.

“If I hear somebody say, “Your son doesn’t smile all the time” or “Why can’t I walk up and talk to Steve Kinser when he’s buckled into the car,” they don’t realize the focus that they have on what they’re doing. It makes it hard for them to just smile and sign autographs in the car and jump in and go. That’s probably my biggest frustration that I see with people that make comments about drivers.”

What is the best part about doing what you’re doing?

“I think it’s meeting the people, seeing the people that you only see once or twice a year. It’s like a big family out there. There’s a lot of great people that sure do love watching sprint car racing. When you share something common with those people it makes it more exciting and more fun.

“I like doing the part of getting the t-shirts designed and the hats picked out, and figuring out what else the public wants to see at a World of Outlaws event. What we’ve probably seen a little more in the last two years are people who have never been to a World of Outlaws event, so they don’t understand how they line up the cars or what happens after time trials. It’s answering some of those questions or giving them information, it’s kinda fun; it kinda adds to your job. I’ve always enjoyed the people.”

For more information about Diane, Donny Schatz and the team, visit http://donnyschatzmotorsports.com. For more on the World of Outlaws, click http://woosprint.com.