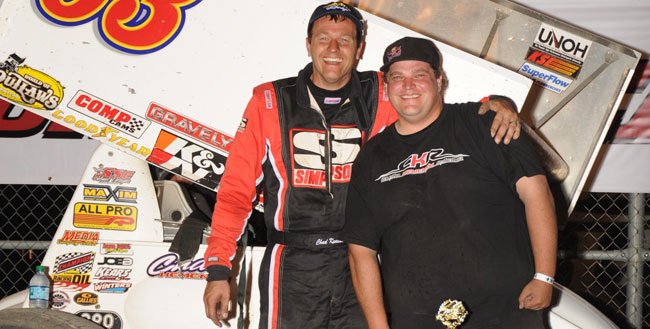 Each week throughout the season we will provide a Q&A with a team member within the World of Outlaws Sprint Car Series. This week we chose Adam Brough, who is an “all-around helper” for Chad Kemenah.

Background: Adam, 32, has known Chad for his entire life and began crewing in 2008 as a tire guy. He has since picked up responsibilities throughout the years and is the lone full-time crew member on the Chad Kemenah Racing team.

What is your official title?

Since you are the only full-time crew guy for Chad, how difficult is that?

“It gets a little hectic at times, but we know what we need to do through the night and we don’t argue about it. We just get it done. Through the week we just work together well.”

What is the most difficult thing about not having other crew members?

“Like the red flag stops to where the Tony Stewart Racing and Kasey Kahne Racing teams have four guys per car, it’s just me so in two minutes I’ve got to put fuel in the race car. I’ve got to do tire pressure. If he wants to make any weight changes, I’ve got to do all of that. So I’m kind of a little rushed, but we seem to get it done.” 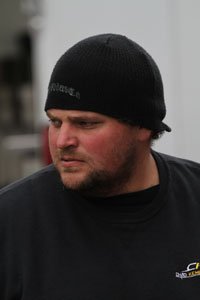 What is the coolest thing about being on the road?

“I work with good people. You get to see a lot of cool stuff around the United States that most people don’t get to see. We don’t fly any miles; you drive them all. So you get to see cool stuff and be around a great group of guys out here with the World of Outlaws.”

What is something that the general fans don’t see?

“A lot of people don’t realize how many hours we put in. And a lot of people think that it’s just a big party on the road, but you actually work. Like tonight (May 5), we race and we’ll drive back to the shop. Then we race Lincoln, Pa., next Wednesday. We’ve got an eight-hour drive, we’ve got to work on the car, wash the truck and trailer. Last night when we got done racing, we went to the car wash, got up at 8 o’clock this morning and started maintenancing and here we are still working.”

You guys recently picked up your first win of the season at Eldora Speedway, what kind of a boost does that give you?

“We are a low-budget team, but we still try to perform like the KKRs and the TSRs. The win last night was huge. We’ve been running good here I’d say the last month and a half and I feel we should have won one or two races already, but we’ve had nothing but bad luck. So hopefully this boost will help us get another one shortly.”

What has been your favorite moment?

“The win at Manzanita was pretty cool, but this one here at Eldora is really big – in front of our fans and our home crowd and family. Hopefully we can bring it back here in July and win the Kings Royal.”

For more information about Adam, Chad Kemenah and the team, visit ChadKemenah.com. For more on the World of Outlaws, click WorldofOutlaws.com.