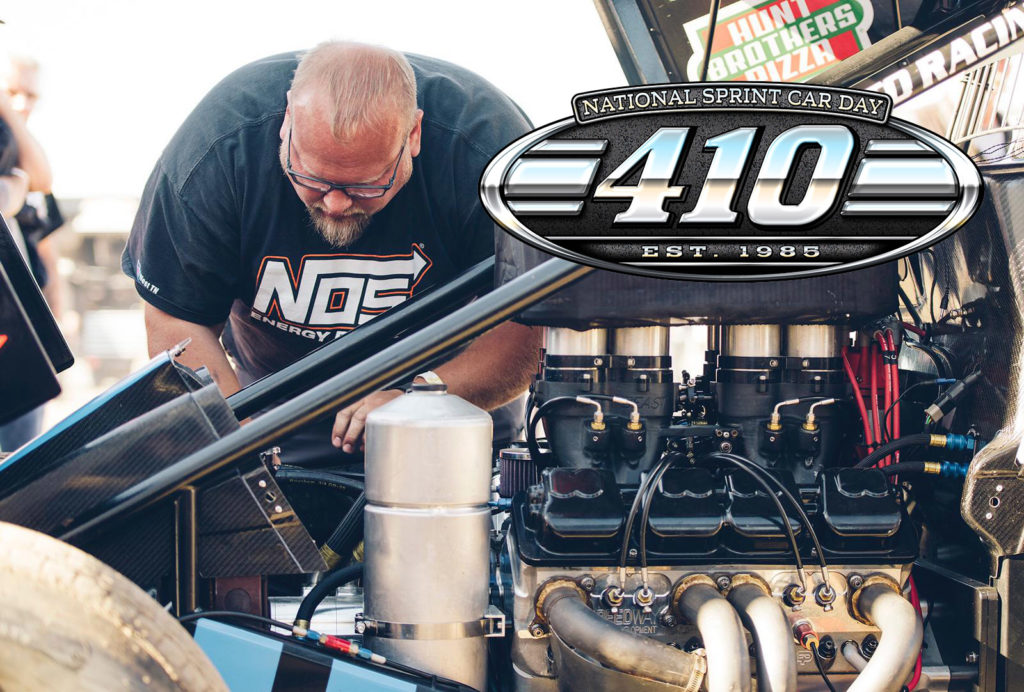 In 1985 the World of Outlaws enacted a 410ci engine rule, unifying Sprint Car racing to this day

[otw_shortcode_dropcap label=”T” background_color_class=”otw-no-background” size=”large” border_color_class=”otw-no-border-color” square=”square”][/otw_shortcode_dropcap]he 410 cubic inch engine has become the standard for top-level Sprint Car competition in the United States. Last year Ford joined GM as a technology provider for the engine platform, and in December Toyota Racing Development (TRD) announced their plans to enter the fray as well. Today — April 10th (4/10) — while race fans and racers alike sit at home yearning for the roar of engines and dusty beers, we look back 35 years to a decision and rule that forever changed the landscape of Sprint Car racing in America.

In 1983 the World of Outlaws mostly followed local rules in order to keep fields full of a mix between the touring Outlaws and the local drivers. From state to state and track to track the Outlaws faced different wing combinations, tire compounds, fuel mixtures, and an ever-widening choice of engine displacements.

“East Coast cars were running big blocks, and they just got bigger and bigger. So just to save everybody a little bit of money, especially guys that tour, they went to the 410 rule, and then everybody else adopted it after that,” says Scott Gerkin, former crew chief for Steve Kinser. “The places where everybody kind of struggled a little bit was when we went to places like Williams Grove and some of those big racetracks. I mean, all the horsepower you could make you could use. Once they went to the 410, things pretty much evened out.”

From the big block monsters found in Pennsylvania to the 360ci engines found elsewhere in the country, and all displacements in between, the Outlaws had to pack a selection of engines to be able to compete on the various track surfaces.

Three-time World of Outlaws NOS Energy Drink Sprint Car Series Champion Sammy Swindell remembers the days before the standardized package. “You know, there were different tire rules at places and different wing rules at places. We couldn’t carry all the stuff you needed. I mean, sometimes we’d have to place wings in certain parts of the country [rather than carrying them in the hauler]. On top of that, you had to carry around a few different engines,” said Swindell. “It was just gonna be hard to keep a lot of people out there on the road and race when there were really no rules.”

In 1984, in an attempt to level the playing field and reign in costs, Ted Johnson — founder of the World of Outlaws — implemented a maximum cubic inch rule for the upcoming 1985 season. The rule was mostly adopted by track owners and promoters around the country. Word of the coming rule had been circulating in racing circles for a couple of years as the powers that be tried to ease the impact of the transition.

“I remember that there was kind of like a phasing-in period. I think they warned them that in a couple of years they were going to make a change. So people used up what inventory they had. I think everybody was pretty receptive to it,” said engine builder Joe Gaerte. “Before the limit was set we [engine builders] were basically sitting there trying to take a motor that’s not designed to be that big and make it even bigger. You’re having special crankshafts made and other things that just drove cost clear out of sight. You had to have so much stuff made, and it really did drive the cost up.”

Swindell saw the same problem from a driver’s perspective. “We didn’t have the capabilities and the parts that we have now. Even the blocks weren’t strong enough to do some of those [modifications]. If you had a big block motor, maybe up to 600 cubic inches or so, you had to have a different car just to put that motor in,” Swindell recalls. “It was hard to run a small block a lot over like 430 inches. At the time with the pieces that we had— we had an engine in the 450s — we had to do all this constant maintenance stuff on it all the time. It was getting to the point where we were starting to go to the aluminum blocks, and some of those weren’t staying together when we started to stretch them up there in the 430s and above.”

For Lincoln and Selinsgrove Speedway promoter Alan Kreitzer the change was a positive all the way around.  “It unified everything. If you had a sprint car in Pennsylvania, you could go race it in California. That was the whole thing. I mean, prior to that, there were some different rules. We were going through a series of unlimited cubic inch combinations. So then when they went to 410, it just unified the whole country, and I think that’s really helped sprint car racing. We’re looking back 35 years now, and I think that certainly it’s withstood the test of time,” said Kreitzer.

In regards to the evolution of the 410 itself, Gerkin says it was a rather simple and logical next step. “In the beginning, it was a 400. And then they had a 406 and that was bored 30-thousandths over. So then they figured 60-thousandths over on a stock 400 motor would be 410. So that’s kind of what they settled on. Now everybody’s taking it out to the max,” he says.

Once the rule became the standard, the playing field was somewhat leveled. But the fact of the matter is, racers are going to spend whatever it takes to find an advantage. Bobby Allen isn’t so sure that it saved any money in the long run.

“No, I don’t care. It’s all the same. If you turn around you say, okay, you can have 430 motors, well everybody is just going to go build 430 motors.  All the parts are the same. You’ve got to buy a crank, you buy rods, you buy pistons,” says Allen.

But this isn’t a judgment on the  410 rule. Now a decades-old rule, the 410 engine package has proven to be a reliable and relatively economical platform. Like everything in racing, you can spend limitless money on new and fancy things. Allen and his Shark Racing team build their own engines. Doing the work in house and following a strict maintenance program can save costs and enable owners and engine builders to get considerable mileage out of the motors.

Saving almost 30 percent of the cost by doing in-house motors, Bobby says, “my motors have got everything they’ve got.”

Gerkin also sees things on the positive side. “I think it probably did equalize stuff for the guys that don’t have the money. I mean, you’re all working in the same tiny box.”

There’s no replacement for displacement. That adage is as old as the internal combustion engine itself. Rules designed to level the playing field and make racing affordable have been tossed around and tried in countless combinations; but at the end of the day, racers are going to spend every penny they’ve got to find an edge.

Take a trip down memory lane with these World of Outlaws Year Books, courtesy of Wece’s Pieces: