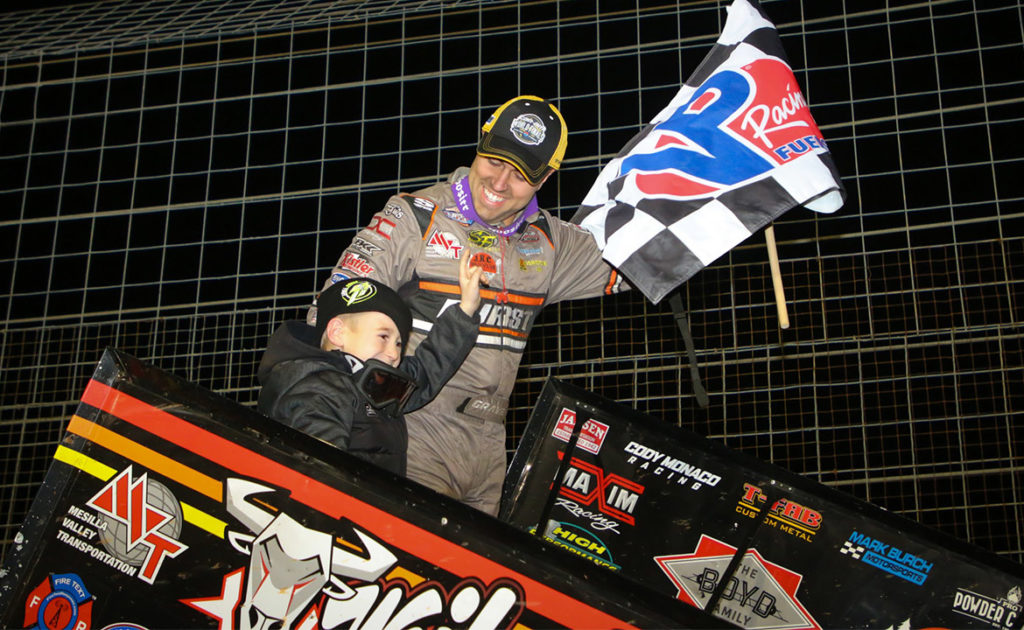 History has been writing a novel this year in the World of Outlaws NOS Energy Drink Sprint Car Series and has an epic conclusion planned for its final chapter.

The setup for it came Friday night during the Can-Am World Finals at the Dirt Track at Charlotte. Ten-time and reigning champion Donny Schatz narrowed Brad Sweet’s points lead to a mere two points with one race remaining and David Gravel claimed his 50th career World of Outlaws victory.

“Why wouldn’t it come down to the last race? Two points,” Sweet said, allowing half a grin to show. “It is what it is. We’ll go give it our all tomorrow just like any other race. If we go do our jobs, we’ll have just as good of a shot as anyone.”

The historically tight points battle has created several scenarios that could determine the 2019 champion. However, Sweet and Schatz are focused on the scenario that will guarantee them a championship: Win.

There’s a four-point difference between first and second. So, if Schatz wins and Sweet finishes second, the championship goes to Schatz — giving him his 11th title. From second to last, there’s a two-point difference between every position. So, if Schatz finishes second and Sweet third, and they tie, Sweet wins his first Series championship by having more wins than Schatz — 16 wins to Schatz’s 11.

Even though the points gap is tight, Sweet said he feels this is still his championship. He wanted the points lead at the final race of the year, and he has it. He admitted his team is new at running for a championship and there are some nerves, but once he gets in the car, he’s focused on doing his job.

“I kind of knew coming into this weekend that we were going to have to contend for a win one of the nights and be in the top three to five,” said Sweet, of Grass Valley, Calif. “He (Schatz) just runs so good here, you’re not going to just run around mid-pack and be able to keep an eight-point lead. I really just kind of put it in my head that it was zero and felt like we needed to basically run within a spot each night, whether we beat him or lose to him.”

While Schatz has 10 championships — half of them coming in the past five years — he’s just as focused to win his 11th title as he was to win his first. With a few less nerves.

“I can tell you I was extremely nervous trying to win the first one,” Schatz said. “And I’m not nervous at all now. I’ve been in this position a lot of times. For the year we’ve had, and the things that have changed, and all that, to be in this position right now feels pretty satisfactory.”

Schatz was strong all night with his Tony Stewart/Curb-Agajanian Racing team. He charged from fifth to third in his DIRTVision Fast Pass Dash on the first lap and then made his way from sixth to second — and closing on the leader — in the 25-lap Feature.

Sweet fought his way into a Dash by racing from fourth to second in his Drydene Heat race. He and Schatz traded slide jobs in the Dash before Schatz pulled away and Sweet had to settle for fifth.

His Kasey Kahne Racing team made rear end adjustments to the car before the Feature, which helped Sweet race his way from 10th to fifth — and hold off attacks from Sheldon Haudenschild to keep his top-five spot.

Neither of the championship contenders were able to match Gravel’s performance, though. The Watertown, Conn. driver launched ahead of the field at the start and began to distance himself from the pack around the 4/10-mile track. However, behind him, an aggressive Aaron Reutzel made an astonishing move to go from eighth to second on the first lap.

Gravel caught lap traffic by Lap 5, allowing the Clute, Texas driver to close in. Reutzel inched close to the Jason Johnson No. 41 car every lap. On Lap 11, he darted underneath Gravel in turn three and cleared him for the lead off turn four.

However, his hard work then went to waste the next corner. When he went high, the slower car of Dave Blaney did the same, blocking his line. The two came inches from colliding, hindering Reutzel’s run and forcing him to fall to fourth. Gravel reclaimed the lead with ease.

A caution with nine laps to go for Giovanni Scelzi’s car having an engine fire put second-place Schatz on Gravel’s rear bumper, and a fast third-place Logan Schuchart in contention to win. When the green flag flew for the final time of the race, Gravel, again, launched ahead and never looked back. He won his 11th race of the season — tying Schatz for the second most wins this year — and accomplished his goal of winning 50 career World of Outlaws wins.

“I really wanted to get to get to number 50 this year,” Gravel said. “It was one of my accomplishments I wanted to do. I can’t do it without this JJR team. Jaxx (Johnson) being here. A lot of our sponsors. A lot of our family. We still have one more race to go. Hopefully we can sweep the weekend, but this is a good start.”

Gravel continued the trend of historical anecdotes this year by being the second driver to get his 50th career win this season — Sweet got his in September at Lernerville Speedway. It’s a trend that will come to a spectacular conclusion Saturday night at the Can-Am World Finals when the champion is crowned — you’ll just have to wait until the checkered flag flies to know who that is.

The World of Outlaws NOS Energy Drink Sprint Car Series will conclude its 2019 season Saturday, Nov. 9 at The Dirt Track at Charlotte for the Can-Am World Finals in Concord, N.C. It’s a sold-out show with only limited standing room and pit access available.