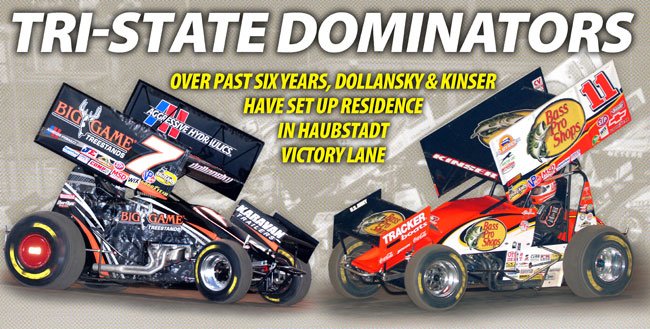 Dollansky, Kinser have alternated World of Outlaws wins past six years at quarter-mile

CONCORD, N.C. — April 27, 2011 — Many believe this is Steve Kinser’s year. The 20-time World of Outlaws Sprint Car Series champion is once again a title contender with four victories this season.

While it remains to be seen if the King of the Outlaws can get his 21st crown, history would indicate Kinser will be celebrating on Saturday night (April 30) at Tri-State Speedway in Haubstadt, Ind. Since 2005, Kinser and Craig Dollansky have alternated visits to Victory Lane at Tom Helfrich’s speedway just north of Evansville. Kinser won in 2005, ’07 and ’09 while Dollansky won in 2006, ’08 and ’10. The edge in ’11 then goes to Kinser, a native of Bloomington, Ind., who started his legendary Hall of Fame career on Hoosier State quarter-mile ovals including Tri-State, where he counts eight wins among his 565 World of Outlaws victories.

“Any time you can compete at tracks where you started racing, you have a little advantage,” said Kinser, who trails Joey Saldana by four points in the World of Outlaws Sprint Car Series championship standings. “Tri-State is still the same track, as far as layout, banking, dirt, everything from when I started.”

Kinser picked up his first World of Outlaws victory at the track in 1980 and has added seven more over the years. According to the driver of the #11 Bass Pro Shops/J.D. Byrider/Chevrolet, there are a few keys to success when it comes to getting around Tri-State.

“It’s a bullring, you’ve got to be fast from the start, but you also have to be able to adjust to things quickly,” Kinser said. “Traffic is a big factor, so making the right decisions at the right time is important. Maybe having raced there as much as I have, I’m better prepared for some that.”

The only other driver to win at Tri-State in the past six visits is Dollansky. “The Crowd Pleaser” is the most recent winner at Tri-State and rolls into the weekend seeking his second victory of the season in the #7 Big Game Treestands/Aggressive Hydraulics Maxim after winning last month on quarter-mile Silver Dollar Speedway in Chico, Calif.

“It’s a demanding race track for a driver and one that you really have to get after and be aggressive to get around there and be strong,” said Dollansky, of Elk River, Minn., who has 36 career victories on the circuit.  “With all the action going on and my driving style it just makes for a great track to race on.”

While many drivers have the skills necessary to navigate the tight dimensions, the racing surface itself plays a pivotal role in deciding the winner. Long before the drivers ever hit the track in their 900 horsepower racing machines, crews have been hard at work to insure the track itself is ready to be one of the focal points of the evening.

“The guys there do a great job creating a surface that puts on some of the best racing and makes for a good show for the fans,” Dollansky said.

For added consideration, Dollansky and Kinser are the top two drivers in laps led this season, too.

So will Kinser continue the trend and wind up in Victory Lane? Will Craig Dollansky make it two in a row? Or will Hoosier State hero and current World of Outlaws points leader Joey Saldana earn his first series victory at Tri-State? Former series champions Donny Schatz and Jason Meyers are also looking for their first victories of the season.

The Midwest tour hopes to begin in earnest at Tri-State Speedway on Saturday, April 30, as the Outlaws compete coast to coast with all dirt roads leading to the World Finals at the Dirt Track at Charlotte, November 3, 4 and 5. Tri-State Speedway is at 9981 South U.S. Highway 41 in Haubstadt, Ind. For more information or tickets, visit www.TriStateSpeedway.com or call 812-768-6025. For more information about the World of Outlaws, visit www.WorldofOutlaws.com.