Thunderbowl Victors of the Past 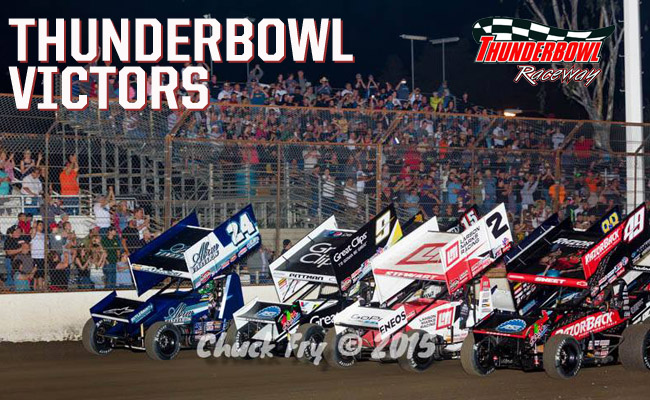 The inaugural World of Outlaws event at Merle Stone Chevrolet Thunderbowl Raceway occurred in September of 2003 when 20-time series champion Steve Kinser scored victory over Tim Shaffer and Jason Meyers. The 2017 season marks the 14th overall year that the “Greatest Show on Dirt” will invade the one-third mile clay oval.

To purchase your tickets for the March 17 and 18 double header contact the Thunderbowl Raceway box office at (559) 688-0909. Tickets will be available at the track for purchase beginning at 1pm each day with will call also opening at that time. The front gate will open at 4pm both nights and racing is scheduled to fire-off around 7pm.

All seating is reserved during the weekend with grandstand tickets $45 on Friday and $50 on Saturday. Bleacher tickets are $40 on Friday and $45 on Saturday. Kids 6-12 are half price and 5 and under are free. A seating chart, as well as hotel info is available online at www.thunderbowlraceway.com

Following this weekend Thunderbowl Raceway will go to dark until Saturday April 8 when the USAC/CRA Wingless 410 Sprint Cars make their return to Tulare, along with the USAC Western Midgets, Western RaceSaver Sprints and IMCA Stocks.

Merle Stone Chevrolet Thunderbowl Raceway is located at the Tulare County Fairgrounds on the corner of Bardsley and K Streets in Tulare, California. From the junction of SR 99 and SR 137, go west on SR 137. At South K go south one-half mile to the Fairgrounds. Camping is also available at the fairgrounds located off turns three and four. #TachiPalace