Thunderbowl Kicks Off with Outlaws 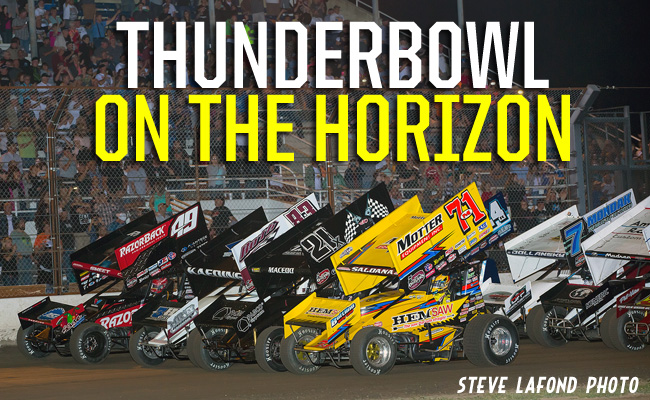 TULARE, Calif. – Feb. 3, 2016 – It’s become an annual tradition each season to open the campaign at Merle Stone Chevrolet Thunderbowl Raceway with the World of Outlaws Craftsman Sprint Car Series invading the one-third mile clay oval. Adding to the excitement for the second straight year is the fact that the California based King of the West 410 Sprint Car Series will co-sanction each night with the “Greatest Show on Dirt” Friday & Saturday March 11 & 12.

This season marks the 13th overall year that Thunderbowl Raceway will host the World of Outlaws Craftsman Sprint Car Series. The inaugural event occurred in September of 2003 when 20-time series champion Steve Kinser of Bloomington, Indiana scored the victory over Aliquippa, Pennsylvania’s Tim Shaffer and local favorite Jason Meyers from Clovis. In six of the past seven years there has been at least one California native who has tasted victory with the World of Outlaws in Tulare.

Last year’s double header saw a Golden State sweep, with San Jose’s Tim Kaeding winning on opening night, while Rutherford’s Rico Abreu scored the $10,000 top prize on Saturday. For Kaeding it was his fourth career World of Outlaws win at the Thunderbowl and for Abreu it marked the second consecutive year he claimed the Saturday finale at the track. Overall it was Abreu’s fifth career victory at the Thunderbowl, which is also the track he earned his first ever King of the West triumph at in 2012.

One of the more accomplished World of Outlaws drivers at Merle Stone Chevrolet Thunderbowl Raceway happens to be Brownsburg, Indiana’s Joey Saldana, who will return to the track aboard the locally based Roth Motorsports No. 83 Sprint Car. The veteran competitor has claimed four WOO features at the Tulare based facility, which is now tied with T. Kaeding for the most all-time. Saldana last season raced to three World of Outlaws Craftsman Sprint Car Series wins, ending the campaign sixth in the final standings.

Those events for the King of the West Series include the Chris & Brian Faria Memorial on May 14, the Peter Murphy Classic on July 22 & 23 and the KRC Safety Fall Shootout on October 8. The March weekend awards KWS drivers & teams special show up points, with the first full-point event taking place in Placerville on April 23.

Also competing both nights in March will be the Wingless Sprints of the USAC West Coast 360 Series. Along with the March weekend the wingless warriors are set to compete at the Thunderbowl on five additional occasions in 2016. Local favorite “Hollywood” Danny Faria Jr. captured the series title last year and hopes to open the Thunderbowl season in style on March 11 & 12. The Saturday finale will also see the Western RaceSaver Sprints on the card. In total the RaceSaver Sprint Car Series will compete in Tulare five times throughout the season.

“We’re really excited about the March weekend to open the season at Thunderbowl Raceway,” said promoter Steve Faria. “Adding the King of the West Series with the World of Outlaws for the second straight year should guarantee one of the best fields of Winged 410 Sprint Cars we see in California. Having the USAC West Coast Wingless 360’s both nights will be great as well. Fans will truly have the best of both worlds each night, so I can’t think of a better way to kick-off the year. The number of quality teams we’ll have in the pit area is going to be pretty special and we can’t wait to see it.”

Tickets are on sale for the much anticipated March 11 & 12 World of Outlaws/King of the West/USAC West Coast weekend by calling 559-688-0909. All seating is reserved in the house, with Grandstand tickets $45 & Bleacher tickets $40 each night.

Merle Stone Chevrolet Thunderbowl Raceway is located at the Tulare County Fairgrounds on the corner of Bardsley and K Streets in Tulare, California. From the junction of SR 99 and SR 137, go west on SR 137. At South K go south one-half mile to the Fairgrounds. Camping is also available at the fairgrounds located off turns three and four.

For more on Merle Stone Chevrolet Thunderbowl Raceway visit www.thunderbowlraceway.com and like our Facebook page at https://www.facebook.com/Tulare-Thunderbowl-Raceway-392991907541396/?fref=ts