THE ULTIMATE GLADIATOR: David Gravel Gets $25,000 for Sweeping Outlaws at Bristol 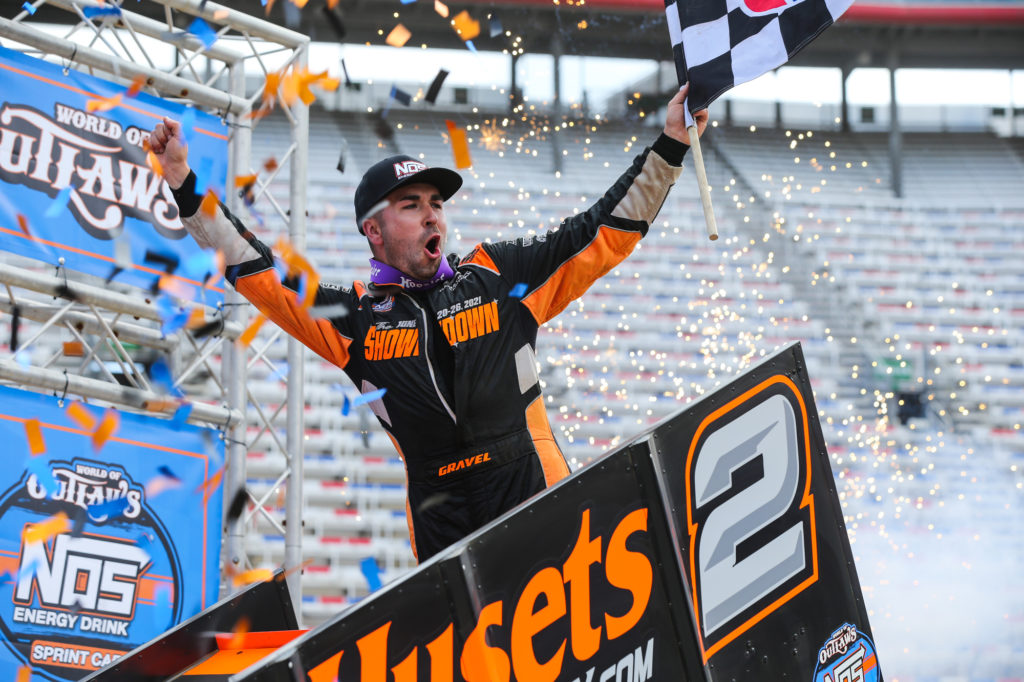 David Gravel loves making statements, and boy did he make a big one at Bristol Motor Speedway this weekend.

After his downright domination of Friday’s opener at the Bristol, TN 1/2-mile, Gravel returned to victory lane on Sunday afternoon and completed a weekend sweep of the Bristol Throwdown. This time, he did it in opposite fashion by sliding to the lead coming to the white flag to earn his 61st career World of Outlaws NOS Energy Drink Sprint Car Series win.

The Big Game Motorsports #2 started on the outside pole of the 25-lapper, but slipped back to third before running down Logan Schuchart in lap traffic and clearing him with a monster run down the backstretch that guided him to a huge turn three slide job on Lap 24.

A symbolical weekend in a way, Gravel’s impressive weekend sweep at the high-banked oval came with Sammy Swindell in attendance as the Grand Marshal; a passing of the torch if you will. With his two wins on Friday & Sunday, the Watertown, CT native equaled the three-time World of Outlaws champion as the only two drivers through six events to win twice at the iconic venue known as The Last Great Colosseum.

Surviving a green-white-checkered restart following Schuchart’s sudden mechanical failure, Gravel drove off to a 0.846-second victory for $25,000 over Donny Schatz, another former Bristol winner in 2001.

“When I fell back to third I honestly didn’t think I had a shot,” Gravel noted on surprising himself with the win. “I was kind of just hoping to stay on the podium at a certain point. I think Donny [Schatz] messed up and just couldn’t take off on one restart and I slid by him, then catching Logan [Schuchart] was a matter of traffic. Sweeping the weekend at Bristol Motor Speedway is a pretty damn awesome accomplishment.”

Beyond Gravel’s double dip, the biggest story of Sunday came with one lap remaining when Logan Schuchart dropped out of the race with a heartbreaking mechanical issue.

The Shark Racing #1S won the DIRTVision Fast Pass Dash and ran away from the pole position to lead the opening 23 laps of the 25-lapper. His run came to a screeching halt on the white flag lap when Gravel built a massive run off the top side of turn two, sped down the backstretch, and launched a slider for the lead into turn three. The bad news came moments later when a mechanical issue forced him to drop form second worth $10,000 to 19th worth $1,200 as he was only a half-mile away from the checkered.

“We had some sort of mechanical issue with the engine,” Schuchart explained afterwards. “I hate saying that because Michael Newman builds us some of the most badass engines, but sometimes stuff beyond your control happens. We had a really fast Drydene Performance Products #1S this weekend and we really improved since we got here on Thursday. I hope we can come back here next year and go for another win.”

Rounding out the podium behind Gravel was Donny Schatz aboard the Tony Stewart/Curb-Agajanian Racing #15 and Aaron Reutzel in the Roth Motorsports #83. For Schatz, the 10-time Series champion collected his third podium through 15 races and first in over a month.

“I wouldn’t say we’re back yet,” Schatz said afterwards. “We had a solid finish and had some good speed, but it’s a lot harder to climb out of a hole than people think. It’s just the nature of the beat. We had a chance to contend there for a while, but just couldn’t follow through. Momentum means everything, that’s a big lesson I’ve learned in my 25 years. So hopefully this is a stepping stone to getting back on track.”

For Reutzel, his second podium finish of the weekend was a sigh of relief following three different engine changes.

“We overcame a lot this weekend, man,” Reutzel noted. “We just kept our heads down and kept digging. We weren’t as good tonight as were Friday, though. Anytime you run well with the Outlaws you build that momentum and build your confidence, which is what we need right now.”

In Sunday’s intense qualifying session, the World of Outlaws track record at Bristol Motor Speedway was again shattered for the second time this weekend. This time, it was Sam Hafertepe Jr. of Sunnyvale, TX going around the half-mile at an average speed of 142.098 MPH during his 13.326-second lap.

UP NEXT –  The World of Outlaws NOS Energy Drink Sprint Car Series will take a few days off to rest and ready themselves for a Midwestern triple-header this weekend. On Thursday, April 29, The Greatest Show on Dirt visits one of the smallest tracks on tour with Jacksonville (IL) Speedway on tap, but then we’re off to I-70 (MO) Motorsports Park on Friday & Saturday, April 30 – May 1 for the FVP Platinum Battery Showdown.