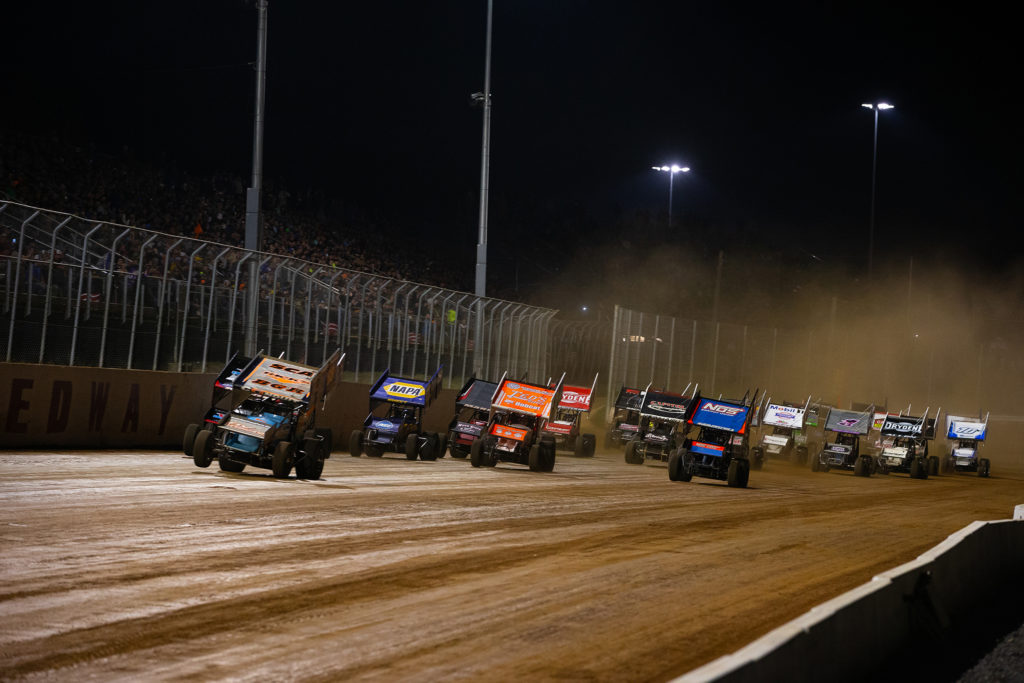 Nittany Showdown is Final Outlaws vs. PA Posse Battle of 2021

We’ve been to a “Fabulous” 3/8th-mile and a historic, paper-clip 1/2-mile, now the final scene in the famed Outlaws vs. Posse rivalry will take teams to the extraordinary “Speed Palace” AKA Port Royal Speedway.

One week following the $75,000/Win National Open at Williams Grove Speedway (Oct. 1-2), The Greatest Show on Dirt will stay on Pennsylvania’s porch for a doubleheader at Port Royal, PA’s wide 1/2-mile on Friday and Saturday, October 8-9.

A local Pennsylvanian hasn’t won an Outlaw show in Port Royal since 2014, when Kunkeltown, PA’s Ryan Smith drove by Lucas Wolfe, Kerry Madsen, and Donny Schatz in a thrilling upset to claim his first-career win with the Series.

Since then, though, six different drivers have finished second-place with the Outlaws at Port Royal. Hodnett, Dewease, Rahmer, Macri, Dietrich, and Marks have all given it their all, but fallen just short of home turf.

With the Outlaws amid the homestretch of the 2021 championship chase and several Posse members recording career-years, you can expect this year’s Nittany Showdown to be an all-time battle in Juniata County.

One Outlaw stands above the rest when you think of Port Royal: Donny Schatz. The 10-time Series champion has picked up four of his 302 World of Outlaws wins at “The Speed Palace.” Fargo’s finest won at the 1/2-mile in 2004 aboard his own equipment, then hit a three-peat with Tony Stewart/Curb-Agajanian Racing in 2017, 2018, and 2019. Since the mid-summer stretch, his Ford Performance, Carquest #15 has hit a new level with an average finish of 4.35 in the last 20 races.

Two other full-time competitors own Outlaw wins at Port Royal, them being Brad Sweet in 2015 and Logan Schuchart in 2016.

Sweet, of Grass Valley, CA, will be looking to continue his stellar season as he chases a third consecutive World of Outlaws championship. Through 65 Features this year, his Kasey Kahne Racing, NAPA Auto Parts #49 has won 16 races with 32 podium finishes and a Series-best average finish of 4.82.

For Schuchart, a lackluster season has suddenly turned hot with the Shark Racing, Drydene Performance Products #1S winning two of the last three races and getting thir mojo back. His Hanover, PA home is just over an hour away from Port Royal, a track that his legendary grandfather, Bobby Allen, conquered on several occasions. He’ll be joined by Bobby’s son Jacob Allen in a second Shark Racing #1A.

Another Pennsylvanian turned Outlaw is Brock Zearfoss of Jonestown, PA, who doesn’t just have wins at Port Royal, but a championship. He’s the 2017 track champion and has a handful of wins to go along with his hardware. Zearfoss led 17 laps of the 2017 race before failing to finish as Schatz cruised to another win. It’s a night that still leaves him wanting redemption.

“That first-career win at Williams Grove is something I’ll never forget, but man I really want to get one at Port Royal,” Zearfoss noted. “It’s a place I’ve loved so much over the years and it’s treated me well in the past. We’ve developed a great package, and hopefully can put ourselves in the right spot to capitalize next month in front of all my local fans.”

The list of local contenders as always with the PA Posse is overwhelming, but this time specifically, there is a new kid on the block that sticks out more than ever. His name is Logan Wagner.

A four-time track champion at Port Royal, the Harrisonville native has always been respected at the Central PA venue, but his stock blew through the roof when he passed Lance Dewease last week to win the Tuscarora 50 over the All-Star Circuit of Champions. Next on the agenda for the Zemco #1Z pilot is his first-career World of Outlaws win.

If you can’t make it to the track, you can watch every World of Outlaws race live on DIRTVision – either online or through the DIRTVision App.