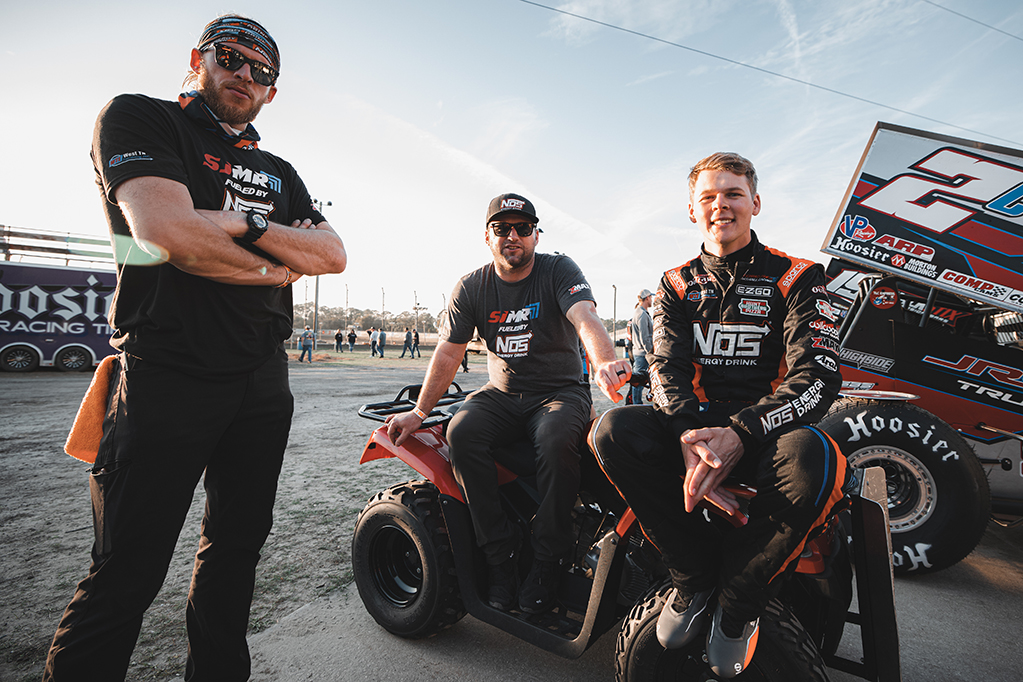 The grind of 80+ races with the World of Outlaws NOS Energy Drink Sprint Car Series isn’t for everyone. That’s why the makeup and composure of your operation is all-important when it comes to fielding a successful full-time team.

While 2021 marks Sheldon Haudenschild’s fourth season at SJMR as the driver, this season is only the second for the entire nucleus of the team which includes Crew Chief Kyle Ripper, Car Chief Nickolas Goodfleisch, and Tire Specialist Drew Brenner.

The young group – average age is 28.2 – has already developed into one of the most recognizable crews on tour. An energetic, fun attitude from the outside combined with a focused, passionate demeanor during business has created a bond that has brought them all success. The numbers say it all.

In Haudenschild’s first two years at SJMR in 2018-19, the team won seven races across 137 events. Since Ripper, Goodfleisch and Brenner officially joined forces and found their rhythm in the summer of 2020, the NOS Energy Drink #17 has won nine of the last 38 features.

“Having three really good guys to have fun with and work with, especially communicate well with on the road is the biggest thing,” Sheldon said on the team. “That’s the toughest thing out here. All of these teams struggle putting four guys together than can work well for a longer period of time. We all have to get along and be able to openly communicate with each other every day.

More interesting than their dynamic is the back story of how this SJMR unit came together.

Ripper, a native of Western Pennsylvania, actually started racing Big Block Modifieds until his first opportunity to work with Brian Ellenberger in 2008 led him down the open wheel path. He found additional opportunities with Jac Haudenschild in the #R19, David Gravel in his own #89G, and Sheldon in the #93 before KCP Racing came calling.

He moved to Knoxville, IA and spent five years as the Crew Chief at KCP’s #18, all while building a family with his wife Kelsi and son Eli. In 2020, though, the opportunity to reunite with Sheldon came about and Ripper instantly jumped on the chance to join the Stenhouse Jr. Marshall Racing #17.

“It’s been awesome,” Ripper noted on his time at SJMR. “I think Sheldon and I just communicate so well. We’ve got the same attitude and just mesh together really similar.”

For Goodfleisch of Ashville, OH, his shot as Car Chief on the #17 brought him back to the sport he loved most

Joining Ripper as a new member at the start of 2020, Goodfleisch came back to sprint car racing after two years as an employee at Stewart-Haas Racing working on the interior of Kevin Harvick’s NASCAR Cup Series ride. His Ohio roots are firmly planted in sprint car racing, though, as he spent six years throughout his teen’s and into his 20’s working with George Fisher and Dale Blaney primarily on the All Star Circuit of Champions tour.

“I didn’t really like NOT being out on the road where I was at in Charlotte,” Goodfleisch spoke on his decision to come back. “I wanted to get back out here and get on the road while I’m still young and had an opportunity to do with a top level team. It has its ups and down like any other job, but we make it fun. It’s not as easy as other people like to think. It’s tough you know, really hard being away from family, but these guys are like a second-family out on the road.”

The most intriguing of them all is Brenner, who swiftly went from a fan at Wayne County to an award-winner with the World of Outlaws in a matter of years.

It all started on a random night at the races when Drew met Sheldon and Ripper in the pits after the races, and they hit it off. One shop party later and eight years down the line, here they are contending for a NOS Energy Drink Sprint Car Series championship.

Brenner went racing with Haudenschild during the summers while he played football and completed his finance degree at Ashland University. Upon graduation, he went full-time in 2017 and has been on the road ever since. His passion and dedication as a legend in the work area has already earned him the Jason Johnsons Sportsmanship Award

“I think between all of our personalities, they all blend really well,” Drew offered. “We’re all young. We understand each other. Put all of us together and we have one common goal: we want to win. We all strive for that and that’s why we’re out here. If you’re not here to win, why are you here? Go home.”

Another factor Haudenschild was quick to point out was the length of their relationships prior to joining forces at SJMR.

“We all kind of go back a little ways,” Sheldon said. “Ripper and I have known each other for close to 10 years and worked with each other early in my career. Drew and Nickolas I’ve known for a long time too. Being back with people I’ve worked with before I think has helped, but also I think Ripper and I doing our own things for awhile did us both good too. Back in the day we didn’t really have the equipment to go win and there was no pressure with that. Now, we’re supplied with the best stuff money can buy and you want to do good for those supporting you.”

Brenner said it best speaking to what every piece of the puzzle brings to the table.

“The biggest difference from ’18-’19 to ’20-’21 I think starts with Ripper,” Drew mentioned. “How he sets cars up and how smart and detailed he is with everything. He can see things most people can’t and he’s just a thinker. From there, it goes to Sheldon. His ability to slow down to go faster and he’s gaining that finesse. He’s able to calm down more, but still has that wild side to him. He’s evolving as a driver and he’s only 27 years old and it’s amazing to see. You add Nickolas to the equation and how hard-working and precise he is, it’s just the perfect fit.”

Haudenschild and Stenhouse Jr. / Marshall Racing will continue their 2021 World of Outlaws season this weekend at a track they’ve already won together at, US-36 Raceway in Osborn, MO on Friday night and Lake Ozark Speedway in Eldon, MO on Saturday.

Last August, Haudenschild stunned the US-36 crowd with a last-lap, last-corner pass for the win aboard his NOS Energy Drink #17. A triumph this weekend would mark his third consecutive weekend in victory lane and put him back atop the list as the winningest Outlaw of the early-season. You can BUY TICKETS HERE for this weekend

WHAT TO WATCH FOR: The Greatest Show on Dirt at PA’s Speed Palace