The Not So Off-Season 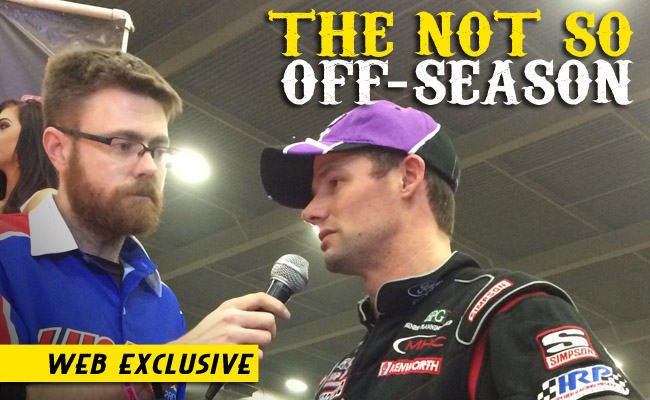 The Not So Off-Season

Pittman, McMahan and others compete in the United States and Australia during the World of Outlaws Sprint Car Series off-season

CONCORD, N.C. – Feb. 9, 2015 – After a season that lasts nine months and last year included 91 completed events, it would not be out of the question to spend the off-season catching up on much needed sleep and avoiding race tracks.

Not for World of Outlaws Sprint Car Series drivers though – from Winter Heat and Chili Bowl to racing Down Under, the off-season has been anything but ‘off’ for many of the series’ regular competitors.

The event brought out many of the best current and former sprint car drivers from around the country. Among the event’s winners were NASCAR star and World of Outlaws Sprint Car Series team owner Kyle Larson and ‘The King’ Steve Kinser.

McMahan took home the win on night one and then followed that up with strong performances on subsequent nights.

“We were solid all week – the first night there we got fortunate in my heat race and we were able to go from sixth to third,” McMahan said. “I was able to restart out on the outside front row.”

“We were solid four out of the five nights and then we stepped on our toes. Race track conditions weren’t favorable and we drew a heat race with seven cars that have won heat races.”

McMahan missed the final feature and lost the overall event championship by just a few points. He said he was disappointed with the final night but was overall happy with his team’s consistent performance all week.

As the sun set at Cocopah everyone’s attention shifted to Chili Bowl Midget Nationals in Tulsa, Okla. which saw Daryn Pittman, David Gravel, Saldana and Jason Johnson among the robust field of drivers attempting to take the coveted trophy.

Pittman has taken part in the event regularly since 2008. The Kasey Kahne Racing driver took on the role of team owner in Tulsa, driving for his own Pittman Motorsports team.

“Growing up, it was an event I enjoyed being a fan at,” Pittman said. “It is something I work hard at and look forward to.”

“I came last year for the first time as a driver and had a lot of fun,” Johnson said during Chili Bowl. “Just a great opportunity to come back and drive for Bryan [Clauson] and this Priority Aviation team.”

Each driver had highs and lows throughout the four day event.

On the final night Pittman was the only Outlaw regular to make it into the A main – he finished the feature in sixth. Johnson advanced from the D main to the C main where he finished in 15th. Saldana finished 18th in the B main following a DNF, and after a wreck on the second night, Gravel was unable to start in Saturday’s D feature.

Following Chili Bowl Pittman boarded a plane to Australia to take on his fellow Outlaw competitors as well the best drivers from Australia and around the world that had assembled in the country.

Sweet, who took home five wins during his first full Outlaws season, spent a month in Australia beginning the day after Christmas. In his first four starts, Sweet won three times – all at Sydney’s Valvoline Raceway.

No one put together as dominant a performance Down Under though as Schatz. The Tony Stewart Racing driver’s trip to Australia echoed his 2014 dominance. Schatz went six for six in his starts in the country. He returned home shortly after the first of the year to prepare for the upcoming season.

As the World of Outlaws Sprint Car Series converges on Volusia Speedway Park for the start of DIRTcar Nationals and the 2015 series season this week, Pittman echoed the sentiment of many.

“There’s no better feeling than getting back in the car,” he said. “Everything is new and fresh, everybody is excited to be there. Not many races that hold the excitement as our first race does.”