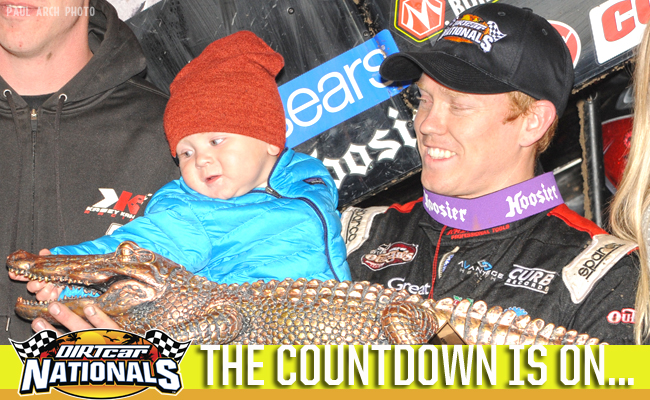 The Countdown is on to the 46th Annual DIRTcar Nationals

CONCORD, N.C. – January 11, 2017 – In just a little more than 30 days, the World of Outlaws Craftsman® Sprint Car Series will embark on a new season and renew the stakes at one of dirt racing’s biggest shows. The 46th annual DIRTcar Nationals, from February 14-25, offers 12 action-packed days of racing featuring multiple series.

The World of Outlaws Craftsman Sprint Car Series, accompanied by the Arctic Cat All Star Circuit of Champions, will compete for the coveted Big Gator trophy through five days of sprint car racing. The World of Outlaws, succeeding the All Stars with three days of racing from February 17-19, will make its 34th appearance in 14 years at Volusia Speedway Park. The Outlaw sprint cars debuted there in 1981.

In the 34 races at the semi-banked half-mile course, eight-time series champion Donny Schatz has claimed eight victories. Notably, Schatz has earned one of the three nights consecutively since 2014; fellow series top-runner Brad Sweet shares his feat, capturing four of the last nine races since then.

Last season Sweet doubled his successes at the track, being the first to win multiple nights since all-time wins holder Steve Kinser in 2011. Though the Outlaws share the spotlight in the 410 division, another series driver has solidified his prowess in the series’ annual grand introduction. Paul McMahan established the track record of 12.569 seconds the year Kinser doubled-down.

The historic DIRTcar Nationals is the most accessible motorsports event during the Florida in February jaunt. Every ticket is a hot pass, so fans can get up close and personal to all the action. Fans will be able to meet their favorite drivers from each of the competing series below.

Tickets for DIRTcar Nationals start at just $20 and are on sale now by calling 844-DIRT-TIX (347-8849), or by visiting http://www.DIRTcarNationals.com.

Visit http://www.DIRTcarNationals.com for the latest news and information from the event. Follow DIRTcar Nationals on Twitter at http://www.Twitter.com/DIRTcarNats.