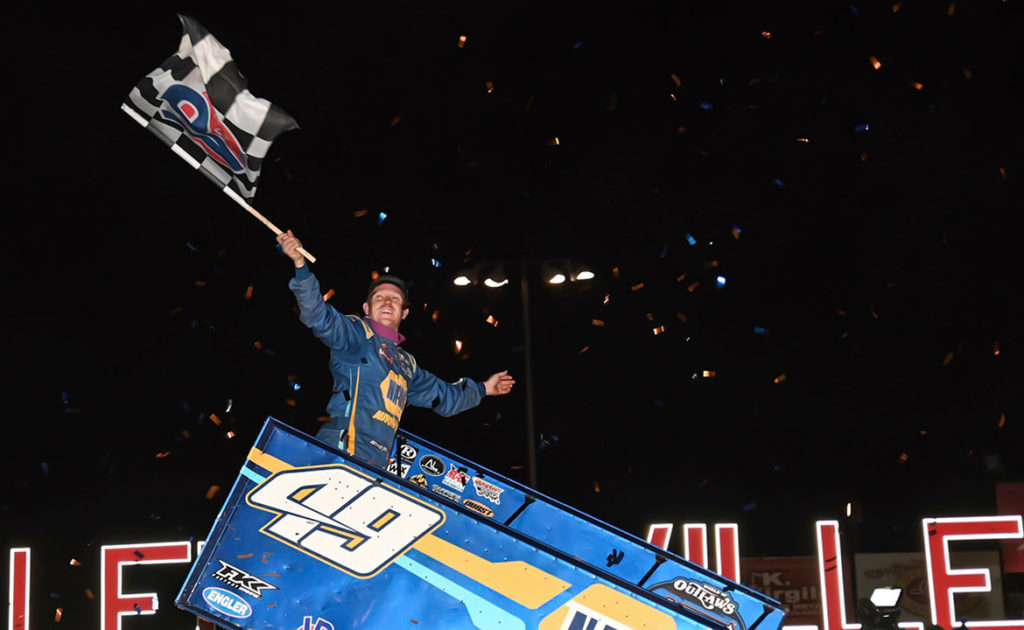 Brad Sweet has made a habit of winning big this season – most notably claiming the $175,000-to-win Kings Royal in July.

However, his win Saturday night at Lernerville Speedway may prove to be his biggest victory, yet.

When Sweet sped by the checkered flag he picked up his second win in-a-row at the Commonwealth Clash event, his 16th World of Outlaws NOS Energy Drink Sprint Car Series win of the season, his 50th career Series win and went from a four-point lead over Donny Schatz to a 40-point lead.

“We’ve had what feels like the best car all year,” Sweet said. “ You know, sixteenth win. We’ve been up front a lot.”

That was the case all night for Sweet and his Kasey Kahne Racing team at the 4/10-mile track. He qualified second to David Gravel – who picked up his 18th Quick Time of the season. Then finished second to Ian Madsen in his Dryden Heat race. He drew the pole for the DIRTVision Fast Pass Dash and went on to win it.

Starting on the front row of the 35-lap Feature with Sweet was his championship competitor.

During the July race at the Sarver, Pa. track, Sweet and Schatz battled all race long for fourth-place with Sweet the victor of the duel. They were set for reenact their battle, but this time for the lucrative win. If Sweet won, he increased his points lead over Schatz. If Schatz won, he would either reclaim the lead or tie Sweet for it.

When the two competitors accelerated their 900-hp chariots at the start of the 35-lap Feature, Sweet had the advantage and crossed in front of the 10-time Series champion before entering turn one. Schatz hung onto the Grass Valley, Calif.-native’s bumper down the backstretch. He looked low underneath the NAPA Auto Parts No. 49 car into turn three but couldn’t match the momentum Sweet was able to exit the corner with up high.

Their brawl was put on pause the first lap when the caution came out for Clay Riney coming to a stop at the top of turn one. When the race resumed, Sweet was able to launch ahead of Schatz. The Fargo, N.D.-native would not let Sweet pull away, though.

Before Sweet could attempt to find a rhythm, the caution came out, again, after one lap. This time, A.J. Flick went off track in turn two.

For the third time in two laps Schatz was awarded the opportunity to start alongside Sweet for the restart. And for the third time Sweet got the jump on him off turn four and cleared the Toco Warranty No. 15 for the lead before the first turn.

Schatz closed on Sweet down the backstretch, leaving inches between his front bumper and Sweet’s rear bumper.

Sweet committed to the high side and Schatz ran low. After putting together a few laps, Schatz found a rhythm on the bottom and began poking his nose further alongside Sweet’s car every corner.

Uncomfortable with the run Schatz was building on him, Sweet changed his line and ran low for a lap. Schatz switched to the high side but was unable to further his march to the lead. With Schatz no longer breathing down his neck, Sweet went back to the top. He was able to keep Schatz at bay, maintaining a few car lengths lead on him. Even through traffic.

“We kind of hit on some stuff last year at this same race,” Sweet said. “We basically ran the car the same way.”

While the championship competitors led the field, Shane Stewart, Ian Madsen and David Gravel brawled for third-place, at one time going three-wide for the position. Stewart eventually won the battle, but once Gravel comfortably moved into fourth-place, he kept pressure on Stewart for the remainder of the race.

Sweet had about a second lead over Schatz near the halfway point of the race. Then shock echoed around the facility. A soft pop emitted from the Schatz’s car going through turns three and four. His Tony Stewart/Curb-Agajanian Racing car drastically slowed and the caution came out.

There was an issue with his engine’s magneto. Schatz could not continue, ending the night in 18th – after a rare 17th-place finish at Eldora Speedway the night prior.

His misfortunate benefit Stewart, who was gifted a front row starting position on the outside of Sweet on the restart. Like Schatz, he was unable to stay alongside Sweet down the front stretch, but dove underneath him into turn three, going side by side with the No. 49 car through the corner. Sweet was still too strong on the high side. He pulled away with the lead and ran off with the win.

Stewart finished second and Gravel rounded out the podium.

“I felt like we had pretty good pace the whole race, we’ve just got to keep our heads down and keep working on it and hopefully we can get some wins,” Stewart said.

Sweet’s big win helped him put a sizable points gap between he and Schatz, however neither driver has been able to maintain a large points gap on the other this year. He didn’t know where Schatz finished after the race but knows that doesn’t matter as long as he keeps winning.

“I just try to stay focused on our car, because as long as we’re winning the race we know that we’re gaining points,” Sweet said. “We can’t control what Donny does or what his team does. We just stay focused on our NAPA Auto Parts number forty-nine.

“We’ve been on a little roller coaster ride where we’ve been up or down a little bit. But I thought we really dug deep at Dodge City and Eldora. Last night (at Eldora) was a big night for us. You know, sometimes those fifths and sixths when you come from the back are good rebounds. In the big scheme of things that’s always good. We just want to get wins. If we show up every night and keep winning these races, it’s our championship to lose.” 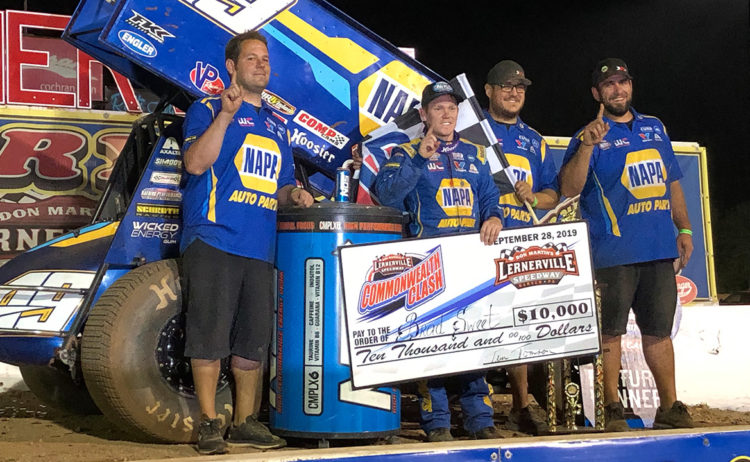