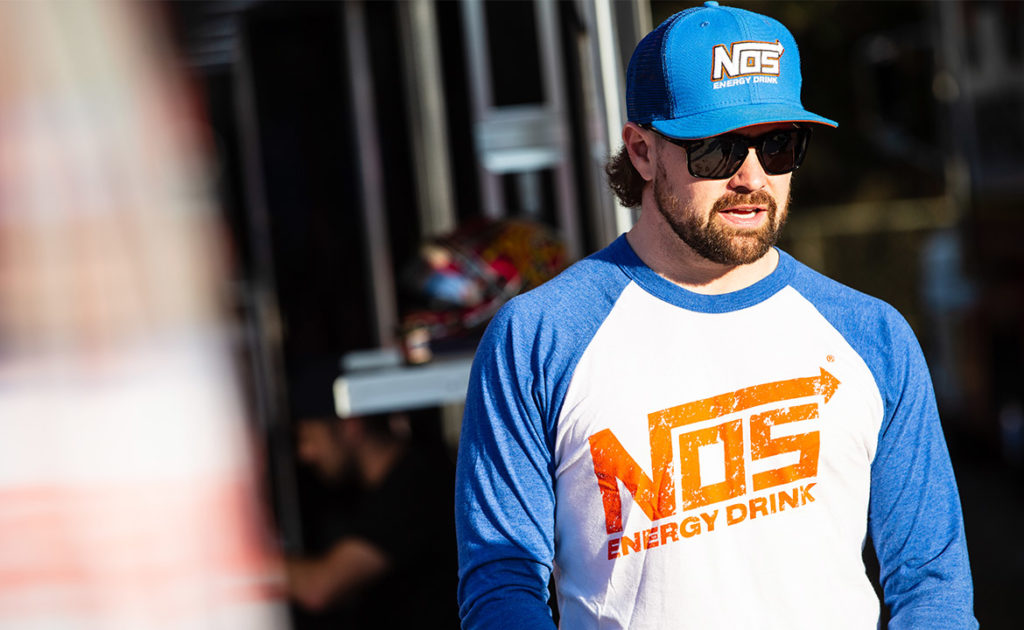 If you’ve ever seen Ricky Stenhouse Jr. at a World of Outlaws NOS Energy Drink Sprint Car Series race there’s no denying his passion for the sport and his Stenhouse Jr.-Marshall Racing team.

While standing in the grandstands at Volusia Speedway Park for the DIRTcar Nationals in February, Stenhouse would hold his pointer finger in the air and flick it around every time his driver Sheldon Haudenschild made a pass. The young Wooster, OH driver kept Stenhouse’s finger busy as he was the hard charger that night, passing 14 cars.

After that race it would be two-months before Stenhouse could enjoy another Sprint Car event or even partake in his day job as NASCAR Cup Series driver for JTG Daugherty Racing due to the COVID-19 pandemic.

However, he was still able to watch his NOS Energy Drink #17 Sprint Car make laps each week. Albeit virtually through the World of Outlaws NOS Energy Drink Sprint Car iRacing Invitationals and with Super DIRTcar Series standout and rising NASCAR driver Max McLaughlin behind the wheel. And while watching the iRacing events aren’t quite the same as the real thing to him, it’s still important to Stenhouse to see his team and sponsors represented in the nationally broadcasted events on DIRTVision and CBS Sports Network.

“Yeah it was big,” Stenhouse said. “I didn’t expect Sheldon to jump in and get a rig like I had to do for some of the NASCAR stuff. It was a lot of work going into trying to get set up to do that. Not to mention it is difficult.

“Max has been working out in my gym. His gym got shut down, so he’s been over at the house, we’re kind of quarantined, hanging out. I was like, ‘Hey, man, I need somebody to represent my team and NOS Energy Drink, being the partner that they are and everything they do for dirt track racing. I was like, ‘Jump in and do a NOS car for us.’ He jumped on board and did that for us, which is huge.”

McLaughlin has had impressive runs in the virtual NOS Energy Drink #17 car, getting two top-five finishes in a row during the iRacing events at The Dirt Track at Charlotte. The events have also allowed the 20-year-old dirt racer a small sense of what it’s like to drive a World of Outlaws Sprint Car.

“I’ve always had a love for Sprint Car racing, so it’s been extremely cool to battle up front and contend for wins with some of the best Sprint Car racers in the business,” McLaughlin said. “Ricky and I are great friends and it’s been awesome to represent him, the Marshalls, NOS Energy Drink, SJM Racing and all their great supporters over the last few weeks. It’s just a great organization overall.”

Stenhouse, who has experience in World of Outlaws Sprint Cars, cited the virtual version of the car is not easy to drive. He said he ran a race for fun with drivers like McLaughlin and McKinney and described his race with a woof.

His hope is, whether it’s through NASCAR or the World of Outlaws, the iRacing events will result in more fans interested in all forms of motorsports. Maybe even lead to real Sprint Car racing on live television.

“If anything, I think it’s helped to grow the sport,” Stenhouse said. “It definitely hasn’t hurt the sport. It’s gotten exposure for brands, such as NOS Energy Drink to be on TV. We’re not getting samples out to fans at the racetrack like we normally do at the track, but still getting some exposure, which is good.”

Like everyone, he’s been chomping at the bit to see his real SJM Racing team back on track and thankful it is happening sooner than later. Through seeing what NASCAR has been going through to try and get its season back going, Stenhouse said it’s not lost on him the same amount of work has been put in by the World of Outlaws and acknowledged the people behind the scenes have put in a lot of hard work to make it happen.

That hard work paid off when the World of Outlaws NOS Energy Drink Sprint Car Series made its historic return to racing — two months after its last race — at Knoxville Raceway on Friday. While Stenhouse joined the thousands of fans happy to be watching Sprint Car racing again on DIRTVision, his team’s night did not play out well.

After winning the Last Chance Showdown and making his way up through the field, Haudenschild found himself upside down in Turn 3 halfway through the race. Kerry Madsen blew a tire directly in front of him, causing to two to collide.

However, the Series’ next race on May 22-23 is at Federated Auto Parts Raceway at I-55 where Haudenschild put on one of the most dominate performances in Series history, leading 45 of the 55 laps, lapping up to fifth place and won by an unprecedented 10.3 second lead over runner-up Donny Schatz. A “pretty fun race,” as Stenhouse called it.

After that race, Haudenschild only finished outside the top-10 six times in the next 26 races. He ended the season with two wins — he had five in 2018 — and finished seventh in points for the third year in a row. In four races, so far, this year Haudenschild has one top-five and two top-10s.

“We ended the year good last year,” Stenhouse said. “Had speed at times. Technically our numbers were better last year than they were the year before, other than the wins. We ran better in some bigger races than we did the year before. More top-fives, top-10s. With less races ran actually. I thought that was good. Obviously, we want to be in the winner’s circle a little bit more often than what we were last year. That tends to keep the spirits up on the team the more you get to Victory Lane. So, hopefully we can do that a little bit more often.”

In the team’s third full-time year with Haudenschild, Stenhouse said he would like to see him and the team finish in the top-five in points this year. While expectations are always to win a championship and as many races as you can, Stenhouse said he looks at drivers like Brad Sweet, Donny Schatz and Daryn Pittman as examples of how it took time before they eventually battled for championships. There are years of learning that goes into it, he said.

He’s seen Haudenschild grow in his time with the team, too. He thinks about races more and has realized there are nights where he just has to get what his car is capable of and not make more work for the team, Stenhouse said.

“Last year, we definitely saw a significant amount less of front axles torn up or getting into different cars or different situations,” Stenhouse said. “He’s learning that, and I think that’s only going to get better. You look at Donny Schatz and Brad Sweet and their consistencies. It’s all about finishing races and putting yourself in the right position. I know Sheldon is learning that. He’s still young. I’m looking forward to continuing that with him.”

Stenhouse is confident his 26-year-old driver and SJM Racing team can have a good 2020 and likes the chemistry the team has this year. Haudenschild was paired with former crew chief Kyle Ripper at the beginning of the season.

“I think Sheldon’s communication with Ripper is in a really good spot,” Stenhouse said. “We raced good in Volusia but got to work on our qualifying a little bit. But I thought we went forward. Got a few hard chargers there and raced good. I definitely like our team.”

Between iRacing and real racing, Stenhouse will have plenty of chances to hold his pointer finger in the air and flick it around as he watches his cars race to the front… and if there’s time this year, he said there’s a newly built Sprint Car waiting in the SJM Racing shop with his name on it.

Tickets for the Saturday, May 23 event at I-55 are already sold out, but you can still purchase tickets for the Friday, May 22 event, click here. Tickets are also still available for the May 29-30 events at Lake Ozark Speedway, click here.