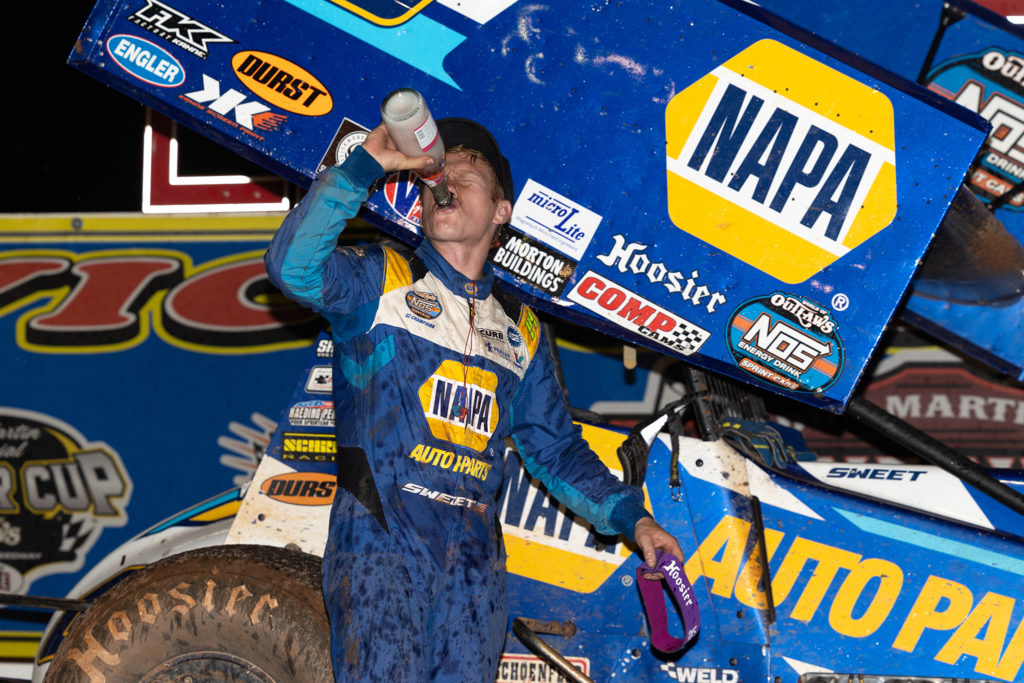 Gold is always the goal, but once a season with the World of Outlaws NOS Energy Drink Sprint Car Series, silver is sweeter.

In the end, it was Brad Sweet piecing together a dominant 40-lap performance to take the check and walk away with his 14th win of the season. The Kasey Kahne Racing, NAPA Auto Parts #49 started third, took the lead on Lap 12, and crossed the stripe with a massive margin of victory at 5.381-seconds.

However, all night long, the story throughout the pits, in the nearly sold-out crowd, and on social media was Sye Lynch.

The 23-year-old Apollo, PA native entered the 40-lap Feature with a perfect night under his belt. He had set Slick Woody’s QuickTime, won his Team Drydene Heat Race, and dominated the DIRTVision Fast Pass Dash to put the #42 on the pole position.

To the Lernerville locals, it was beginning to feel all too similar to the 2002 Silver Cup which sent Sarver into pandemonium. On that July night 19 years ago, it was Sye’s father Ed Lynch Jr. defeating the Outlaws and earning his first career victory at their home track. On this night, it was about the next generation and Sye’s golden opportunity.

He commanded the opening lap of the Feature, but the crowd really came to life when Lynch fought Sweet for the top spot. The two-time and defending World of Outlaws champion tossed four different sliders at him, but Sye continued to rally back with his crossovers becoming savvier by the lap as the roars only echoed louder.

Eventually, Sweet made his turn one slide job stick on the 12th circuit as Lynch was unable to find the drive off turn two to counter him. From there, The Big Cat never saw another challenge.

The Grass Valley, CA native lapped his way up to 11th-place as he cruised away to a dominating victory worth $25,000. The win is Sweet’s third at Lernerville, but his first in the Don Martin Memorial Silver Cup. He joins his brother-in-law Kyle Larson as the only two Californians to win the Sarver, PA special event.

It’s his 72nd career World of Outlaws NOS Energy Drink Sprint Car Series triumph, tying him with “The Wild Child” Jac Haudenschild for 11th on the All-Time Wins List. He now is only 12 wins away from reaching the top-10.

“I about gave it away when I drove off the backstretch with five or so to go,” Sweet quickly said as the rain came down. “I had a really good car, we just got too free at the end. This NAPA Auto Parts car is fast right now. Excited for the rest of summer.”

Donny Schatz made a late charge to put the Tony Stewart/Curb-Agajanian Racing, Ford Performance, Carquest #15 in the runner-up position.

Aaron Reutzel ran second for most of the race but eventually slipped back to finish third aboard the Roth Motorsports #83. That’s nine podium results for the Clute, TX native, who is in the midst of a heated battle for The Kevin Gobrecht Rookie of the Year Award.

After starting on the outside pole, David Gravel brought the Big Game Motorsports #2 home with a fourth-place finish. Rounding out the top-five was Alice Springs, NT, AUS native James McFadden with a fifth-place bid for the Kasey Kahne Racing, Karavan Trailers #9.

Closing out the top-1o on Tuesday night was Logan Schuchart in the Shark Racing #1S, Carson Macedo in the Jason Johnson Racing #41, Tim Shaffer in the Bryan Grove #28, Christopher Bell in the Swindell SpeedLab #39, and Sheldon Haudenschild in the Stenhouse Jr. Marshall Racing #17.

Citing the wrong setup decision, Lynch’s #42 faded in the late going and ultimately ended up 15th, but his remarkable run through the beginning of the night lost no luster.

UP NEXT: The World of Outlaws NOS Energy Drink Sprint Car Series will travel to Central Pennsylvania for another matchup vs. the PA Posse this weekend. Mechanicsburg’s Williams Grove Speedway is the site of the battleground with Summer Nationals kicking off on Friday night and offering a $20,000/Win finale on Saturday.