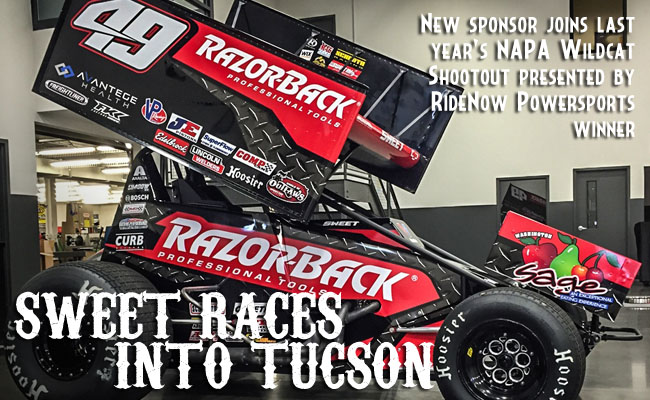 TUCSON, Ariz. – March 3, 2015 – Coming off a win at DIRTcar Nationals in Florida two weeks ago, Brad Sweet leads the World of Outlaws Sprint Car Series into the NAPA Wildcat Shootout presented by RideNow Powersports on Saturday night at Tucson’s USA Raceway with the series points lead and a new sponsor.

Last March, Sweet put together a dominant performance in Tucson, holding off Kerry Madsen and Steve Kinser to score his second win of the season.

“It’s great to be able to return to a track that we have notes for and have had success at,” said Sweet, a native of Grass Valley, Calif. “USA Raceway has always been good to Kasey Kahne Racing. Both Daryn [Pittman] and I really enjoy the track. I feel confident as we head there this weekend.”

Sweet and Kasey Kahne Racing with Mike Curb also announced this week the addition of a new primary sponsor for 2015. Razor-Back, a leading manufacturer of landscaping and construction jobsite tools, will serve as a primary sponsor of the No. 49 car for 37 races this season, beginning with this western swing.

“Brad is off to a fast start and, thanks to Razor-Back, he’ll be able to run a full season and compete for the World of Outlaws Sprint Car Series championship,” said KKR team owner Kasey Kahne. “Razor-Back’s tough American-made tools fit well into the KKR family and we are looking forward to getting them to victory lane this season.”

Sweet will carry a new Razor-Back/Sage Fruit/ASE paint scheme for the first time at the Dirt Track at Las Vegas Motor Speedway.

Tickets for the NAPA Wildcat Shootout presented by RideNow Powersports on March 7 are available now by visiting www.WorldofOutlaws.com/Tickets, or by calling 1-877-395-8606. Audio and pay-per-view video of the event will also be broadcast live on http://www.DIRTvision.com.

ABOUT THE TRACK
USA RACEWAY is a semi-banked, 3/8-mile oval. The track record of 12.076 seconds was established by Paul McMahan on March 9, 2013.For ticket information, visit http://dirtcar.ticketforce.com/ordertickets.asp?p=557&backurl=default.asp .