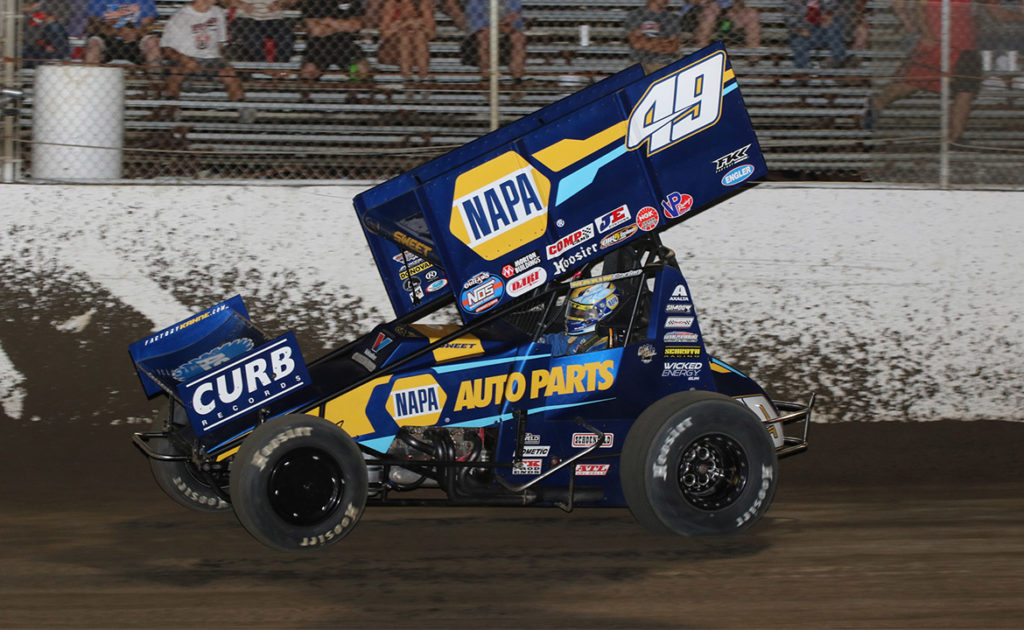 Brad Sweet and Donny Schatz have been waging the closest championship points battle in recent World of Outlaws NOS Energy Drink Sprint Car Series history, having fought back-and-forth over the summer and now into late August.

Sweet is no doubt counting on a strong performance in his native California, especially when the tour invades Placerville Speedway on Wednesday, Sept. 11 for the 49er Gold Rush Classic presented by Riebes NAPA AUTO PARTS.

Sweet and fellow Californian Rico Abreu were in an epic duel last year at Placerville, weaving through lapped traffic and leaving inches between each other. Fans can expect the same kind of action again this year with Sweet on the hunt for his first Series crown.

Sweet, of Grass Valley, Calif., has already collected 12 wins this year – including the Kings Royal. He and his Kasey Kahne Racing team will look to make big gains with another win at Placerville Speedway – his home track.

His win last year was his first with the Outlaws at the quarter-mile speedway. Schatz also has one win at the bullring – in 2015. In search of his 11th World of Outlaws championship, Schatz and his Tony Stewart/Curb-Agajanian Racing team have claimed eight wins, so far, this year and has been the most consistent driver, finishing outside the top-10 only four times. He currently leads Sweet in the points, but neither driver has been able to run away with the championship lead.

While Sweet held on to win last year, not far behind him was Sheldon Haudenschild in second-place. Haudenschild has been building momentum with his Stenhouse Jr.-Marshall Racing team in the last month with a dominating win in the Ironman 55 at Federated Auto Parts Raceway and had an impressive charge from 15th to seventh at the NOS Energy Drink Knoxville Nationals presented by Casey’s General Store.

David Gravel won his first Knoxville Nationals title this year and has kept himself close to the championship points race. He currently sits third in points, a little more than 100 points behind Schatz, but there are still more than 20 races to go. Plus, Gravel also knows how to get to victory lane at Placerville, having won there in 2017.

All that ensures it will be an exciting 49er Gold Rush Classic presented by Riebes NAPA Auto Parts with $10,000 on the line.

In addition, USAC Midgets presented by Elk Grove Ford will be competing in a non-points $1,500-to-win Feature event, bringing the top midget racers on the West Coast to Placerville under race director Doug Lockwood for this huge mid-week special.

Grandstand gates open at 3 p.m. with Hot Laps at 5 p.m. and racing scheduled to start at 6 p.m. Get tickets and more information.

As always, if you can’t make it to the show, you can catch all of the action LIVE on DIRTVision.com.