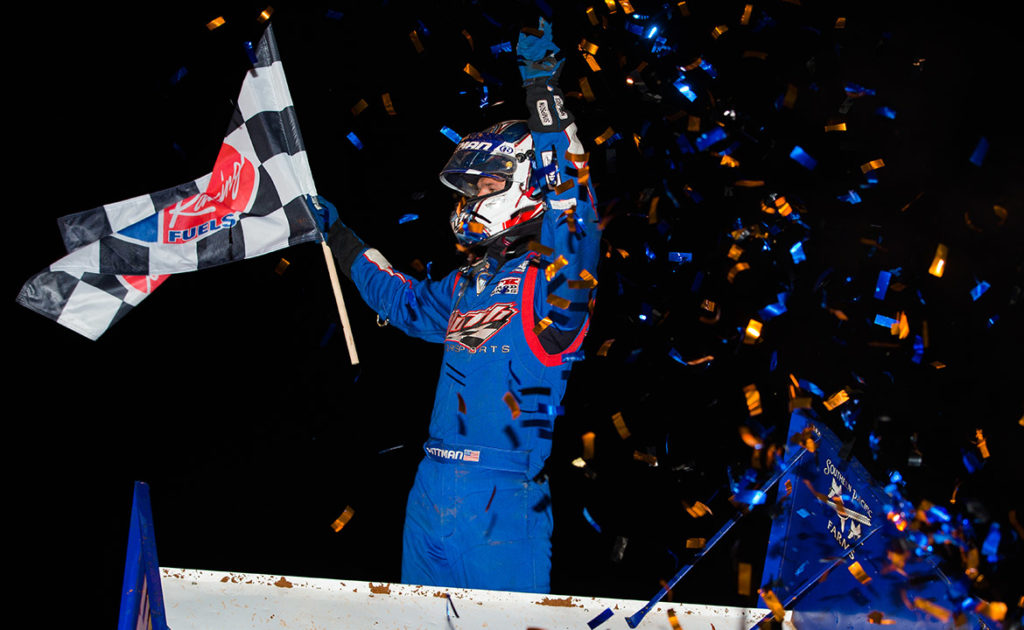 Daryn Pittman’s wife and two kids fell into his arms after he climbed out of his car in Victory Lane at Lawton Speedway Friday night.

It was a moment of celebration, reflection and embracement.

They’d been on a different emotional ride the week prior.

After 25 years of racing, which includes winning the 2013 World of Outlaws NOS Energy Drink Sprint Car Series championship, Pittman, of Owasso, OK, announced he would step away from full-time racing at the end of the year.

Seven days later, it was announced he wouldn’t finish the year with Roth Motorsports – who he’s driven for since the beginning of 2019. In a mutual agreement, the two decided to part ways after this weekend at Lawton Speedway and Devil’s Bowl Speedway. Then Pittman will finish the season with Heffner Racing.

That announcement came a day before returning to his home state to compete in front of family and friends at Lawton Speedway – the track that gave him his first ever Sprint Car win.

Pittman was able to keep it all out of his head on race day, though.

“When you do it this long, you’re pretty good at tuning everything else out,” he said. “It’s been a roller coaster few weeks on a couple of fronts. I’m glad to be making news like this, rather than how we have been.”

It didn’t take him long to prove his mental toughness and level of focus either.

Pittman qualified third, won the Drydene Heat Race and then the DIRTVision Fast Pass Dash – placing him on the pole for the Feature. His last win had come in September 2019.

When the 35-lap Feature commenced, he continued to show his starvation for another win. Pittman mastered his relationship with his throttle to launch ahead of second-place Parker Price-Miller on the initial start. The young Indiana-native tried to keep pace with Pittman in the opening laps but eventually lost him by about three car lengths.

The technical track conditions left little room for error. Price-Miller discovered that on Lap 11 when he nearly flipped his car in Turn 3.

His error gave Pittman a new challenge with David Gravel lining up alongside him on the restart. However, like Price-Miller, Gravel couldn’t keep pace with Pittman on the restart and faded. Gravel then had to fend off Sheldon Haudenschild, who eventually found himself in the work area with a flat left rear tire and fought back to a fourth-place finish.

The Roth Motorsports #83 car had a challenger for the first time all night. With 10 laps to go and slower traffic not making Pittman’s life easy, Sweet raised the heart rate and blood pressure of those biting their fingers for the Oklahoma kid.

Sweet dove underneath his former Kasey Kahne Racing teammate into Turn 1 with seven laps to go and nosed ahead of him through the corner. Pittman had the better momentum around the high side, though, and charged ahead. Sweet then had six more laps to rebuild another run. He made the most of them.

On the final lap, he was there. Sweet made a last-ditch effort of again throwing his car underneath Pittman into Turn 1. He just about cleared him by the center of the corner but Pittman wouldn’t open the door for him to take the lead. With the momentum on the top lane still on his side, Pittman launched back ahead of his last lap rival off the corner.

By clearing Sweet off Turn 2, Pittman went on to end his winless streak, silence any questions of his performance and throw a confetti-filled homecoming party in Victory Lane with his family and friends.

“To win here (at Lawton Speedway) with as many friends and family, people that have supported me for 25 years, honestly some of them longer than that, honestly means more than anything,” Pittman said. “Yeah, we’re glad we won, but with as bad as our season has been, I still show up to every race to win and know that we can contend. It’s just been a struggle and a grind. I show up with the same attitude every race. And the same effort, and, man, we just hit it tonight.

“I’ve got to thank Dennis and Teresa (Roth) for giving me this opportunity for the last two years to run their car. You know, unfortunately it just didn’t work out the way we wanted. I couldn’t be more grateful for them sticking with me and giving me this opportunity to stay out on the road and continue to do what I love to do. Man, it’s a great feeling. This is what Victory Lane feels like. I was starting to forget.”

Sweet had to settle for his eighth runner-up finish this year but was able to extend his points lead. He’s now 16 points ahead of Logan Schuchart, who finished fifth.

“I kept getting a run off (Turn) four, thinking I could slide him (Pittman) and maybe show him the bottom and get him off the top,” Sweet said. “I just didn’t do a good job there. But he did a good job. He covered all of his lines right and got through traffic good enough that we couldn’t get him. I know it’s kind of Daryn’s last run here, so I’m really happy for him and his family.”

Gravel finished third for the second race in a row and extended his top-10 streak to 25 top-10 finishes in a row.

“I felt like I had just as good of a car as anybody there at the beginning and just faded late,” Gravel said. “We want to get these wins. I’m sick of these top-fives and stuff. Being consistent is great, but we want to win races. So, hopefully we can get in Victory Lane tomorrow.”

The Texas Outlaw Nationals at Devil’s Bowl Speedway on Saturday will be Pittman’s final race with Roth Motorsports. He also has 13 more races this season before he hangs up his helmet as a full-time driver.

No matter the results in that time, his home state return provided a moment of celebration, reflection and embracement.