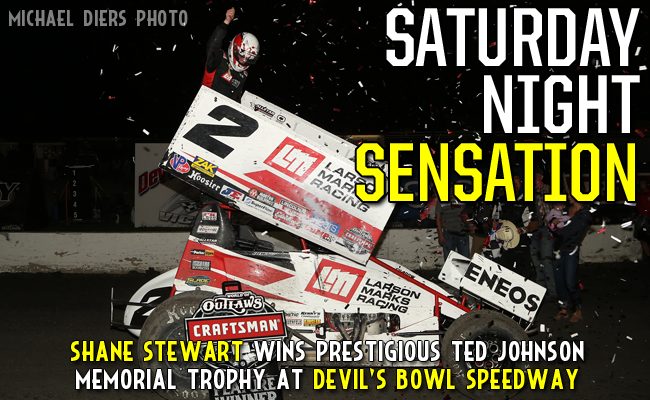 MESQUITE, Texas – April 23, 2016 – An emotional Shane Stewart climbed from his car and wiped away tears of joy after he fought his way to the front of the field and claimed Saturday night’s Texas Outlaw Nationals $20,000 to-win finale at Devil’s Bowl Speedway, his second World of Outlaws Craftsman Sprint Car Series victory of the season.

Stewart is just the third driver to chisel his name into the Ted Johnson Memorial trophy, after Daryn Pittman claimed the inaugural event in 2014 and Donny Schatz won in 2015.

“I’m a little choked up, this is a big win for me,” Stewart said. “A lot of people have helped me get to this point. I drove for a lot of good car owners, like my mom and dad who are here.

“It’s been a long road to get here that’s for sure, and some days you don’t think you’re ever going to get here but when you finally do it makes it really special. There were plenty of times I thought “this is it, I am going to have to get a regular job” but people kept believing in me and giving me opportunities – [team owners] Justin [Marks] and Kyle [Larson] are a great example of that.”

Stewart’s victory was not due to a lack of competition, as the Bixby, Okla. -native fought his way around Pittman, who owned the top spot for much of the night after leading the opening 23 laps, then held off Joey Saldana for the victory.

“This year we are believing in each other and doing a good job,” Saldana said. “Dennis [Roth] is providing us with all the great equipment we need to compete at a high level and that is showing out here on the racetrack, so hopefully we can continue this and keep the Roth family happy.”

To start the night, Jason Sides captured the quick-time award, which is his first of the season, then won his heat race to qualify for the dash. Unfortunately for Sides, the dash invert hurt his chances, as he had to start the six-lap race in the sixth position and never returned to the front of the field.

The winner of the dash and first place starter went to Jason Johnson, who started third Friday night and finished fifth. Unfortunately for the Eunice, La. -native, he never led a lap in the 30-lap feature, as Pittman, who started second, rocketed around him for the lead on the opening lap.

Pittman, in the No. 9 Great Clips/Sage Fruit car, appeared to have control over the top spot, much the same way he did Friday night, as he easily pulled away from second place Joey Saldana, who had worked his way up from the fourth position.

Early in the feature Pittman and Saldana stayed nose-to-tail, but it wasn’t until a spree of late race cautions that Stewart would enter the picture in his American Born Moonshine/Eneos Oil No. 2.

Stewart started the feature in the third position and lurked in the top-five the entire race, biding his time and waiting for a chance to challenge the leaders.

That chance came following a red flag with six laps to go.

Stewart worked his way around Saldana on the ensuing restart, then set his sights on the Pittman who was leading. Stewart got by Pittman for the lead just before the race-long leader suffered a flat left rear tire, which all but ended his chances of claiming the win.

Stewart held off challenges from both Saldana in the Roth Enterprises/HR Livestock No. 83 and Kerry Madsen in the Keneric Healthcare/American Racing Wheels No. 29 in the final few laps to capture the victory, one that he was able to share with his family, who was present for the race.

“Restarting on the outside just saved me,” Stewart said. “I’ll humbly accept this win – we didn’t have the best car tonight. We didn’t have anything for Daryn [Pittman], and you never want to see a competitor go out with a flat tire, but we were just in the right place at the right time and took full advantage of it.”

Saldana, winner of Friday night’s feature at Devil’s Bowl, finished the runner-up position after again contending for the win, but just coming up one spot short of sweeping the weekend.

“On that last double-file restart, Pittman had a flat tire and you know that tire is going to go down and have an issue,” Saldana said. “I ran my car too safe there and got snookered there by Shane [Stewart] and got tight.

“Definitely felt like I had a second place car. I was right there with Daryn [Pittman] on that restart, and you hate losing races on restarts – I lost one last week at Bakersfield Speedway…I have got to get better at that if I am going to win these races like this.”

Madsen managed a third place finish after he started the feature in the 10th position and charging his way to the front of the field.

“I have two good race cars and I keep letting the guys down. Hopefully, if we continue to get this thing up front, people put so much into this team, and the team deserves better than what I am giving them at the moment.”

The World of Outlaws Craftsman® Sprint Car Series continue to march east, as they head to I-30 Speedway in Little Rock, Ark. on Tuesday, April 26. For more information and to learn how to purchase tickets, visit www.WorldofOutlaws.com/I-30Speedway.

RACE NOTES: Daryn Pittman continues to lead the series in laps led at 173…Shane Stewart becomes the fifth multi-race winner in 2016…Brad Sweet finished outside of the top-five for only the third time this season.