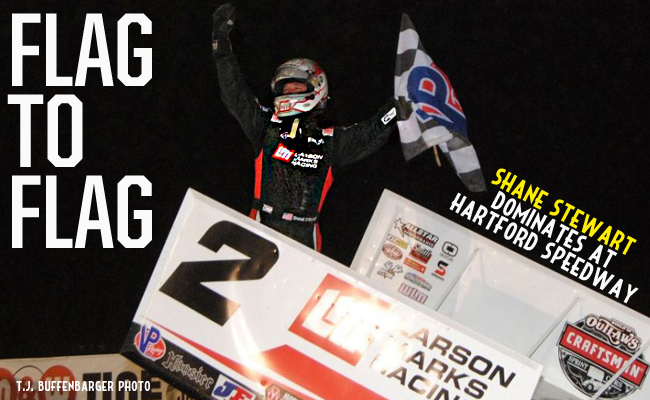 HARTFORD, Mich. — September 21, 2016 — Shane Stewart knew that the initial start and any restarts would be crucial on Wednesday night at Hartford Speedway in Michigan, as the World of Outlaws Craftsman Sprint Car Series returned to the “Wicked Fast Half-Mile.” Stewart wound up mastering the initial start and a pair of double-file restarts en route to picking up his seventh A-Feature win and eighth overall triumph of the season. Stewart led all 25 laps of the event, which was originally postponed by rain back on July 29.

The veteran driver started on the outside of the front row in the main event and used a strong start to power his way past pole sitter Donny Schatz on the high side in turn two. Stewart quickly pulled away, after taking the lead, before the first caution flag of the night flew on the second lap.

“The starts and restarts were everything tonight, especially being beside the (No) 15 car,” said Stewart, who drives the Eneos machine for Larson Marks Racing. “I didn’t think I would get that good of a start on the initial start. I was off a little in the dash and we made some good changes to our Cool Chassis that brought it back to life for the feature. I can’t thank my crew enough. This team has been through some trying times this summer. To finally get on a little roll feels great. We have a few races left and some big races coming up that we want to run well at.”

Stewart had a close call coming off turn four on the eighth circuit, as he was about to enter lapped traffic, jumping the cushion and nearly getting sideways. He packed the right rear with mud in the process, which led to a strong vibration for the rest of the race. As the leaders negotiated lapped traffic, Schatz was able to close in on the 10th lap and stuck with Stewart in traffic for a few circuits.

“It was so dirty in the middle (of the track) that I figured if I spun my tires at all Donny (Schatz) would get a good run on me,” said Stewart. “If he could get along side of me in turn one, I knew he would slide me. It just worked out good for us. Sometimes those restarts work in your benefit and sometimes they don’t. Tonight we were able to get good, clean starts. When you race Donny, you know he is always going to give you enough room. He could have slid me up there on the initial start pretty heavily on the back straightaway and he never does. It’s always a joy and pleasure to race with him.”

Schatz had one final shot at Stewart on a lap-18 restart. He dove low in turns one and two, making a bid for the lead, but to no avail. Stewart was then able to pull away and again quickly open a several car length lead. Schatz ended up finishing second as he continues to chase his eighth series championship for his Bad Boy Off Road team.

“Shane was definitely better tonight,” said Schatz. “I knew we were going to be a little off the first couple laps. About eight laps in, I thought we would get going and just never did. It felt like the left rear was flat, but the tire is not flat. We have something going on there, but it was a respectable finish.”

After winning the Craftsman Club Dash, Schatz started on the pole for the 25-lap race, with Stewart to his outside. On each of the double-file restarts, Schatz lined up on the outside of the sprawling half-mile. For Schatz, the runner-up performance was his 53rdtop-five finish of the season.

“It was a fast track and you just had to get up there and hammer down,” Schatz noted. “We got on the bottom a few times and just weren’t able to finish the corner. I guess sometimes when you get going and something doesn’t feel quite right, it’s better to not push the issue, with how fast you are going around here and get yourself in trouble. We’ve definitely torn up enough stuff in the last month. It was a respectable finish for these guys and a great job. We’ll go on to Friday and try to win one.”

Tim Shaffer finished third to record his best World of Outlaws Craftsman® Sprint Car Series finish of the season. The native of Aliquippa, Pennsylvania started sixth and gained a couple of spots on the opening lap. He then worked his way around Ian Madsen for the third position. At one point, Shaffer, Madsen and Daryn Pittman were three-wide, battling for the third spot.

“The team has given me great cars,” said Shaffer. “Cody Jacobs came along tonight and really turned the wrenches well and we were fast. We had three crew guys and they all did their job. It was up to me to do my job, too. You had to make something happen on the restart. The car was very good on the restarts. We got strung out a bit in open track, but everyone on the team did a great job.”

David Gravel finished fourth in the Big Game Treestands machine as he kept pace in the battle for the second spot in points. Pittman crossed the line fifth in the Great Clips No. 9 and holds a single-point advantage over Gravel. Brad Sweet was sixth aboard the Ollie’s Bargain Outlet car. Jason Sides worked his way from the 19th starting spot to finish seventh. Ian Madsen was eighth, followed by Joey Saldana in ninth and Jason Johnson rounding out the top-10.

The World of Outlaws Craftsman Sprint Car Series returns to action on Friday at the famed Eldora Speedway for the opening night of the Four Crown Nationals.

RACE NOTES:  Shane Stewart in the Larson Marks Racing machine fends off a late-race charge from Donny Schatz to lead all 25-laps at Hartford Speedway. The race got excited with just under 10-laps remaining when a great three-wide battle for third-place took shape between Brad Sweet, David Gravel, Daryn Pittman and Tim Schaffer. It was Schaffer winning that battle to round out the podium behind Stewart and Schatz as your top-three finishers. This win marks number seven on the 2016 World of Outlaws Craftsman® Sprint Car Series for Stewart.