BY INCHES: Macedo wins thriller at Haubstadt during historic broadcast 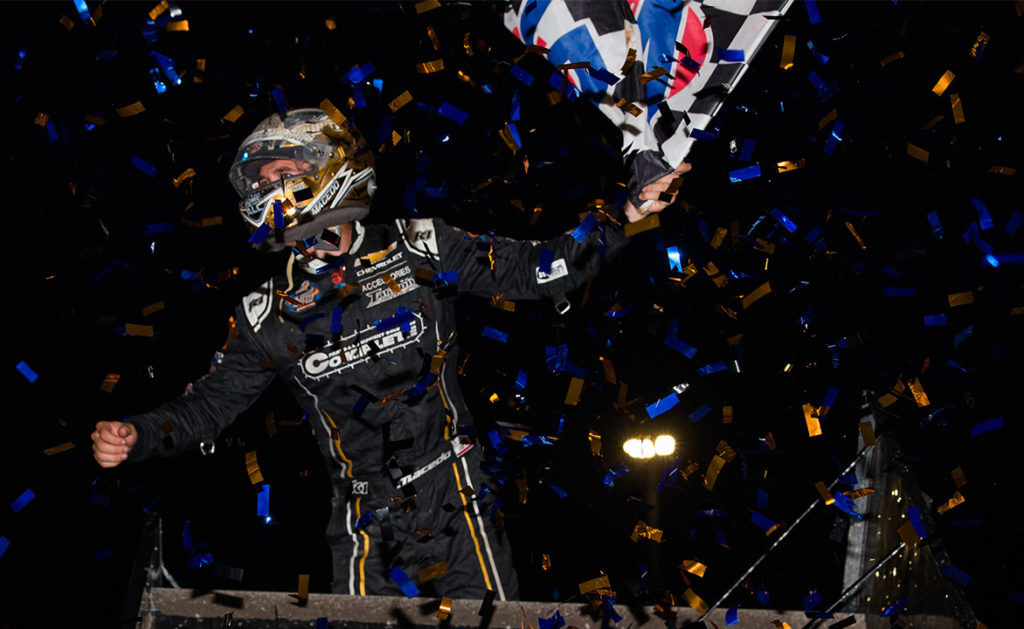 Carson Macedo was prepared to leave Tri-State Speedway Saturday night with either a trophy or a wrecked car.

Not only were he and his Kyle Larson Racing team eager for a return to Victory Lane, Saturday night’s World of Outlaws NOS Energy Drink Sprint Car Series event awarded $10,000-to-win and was broadcasted live on CBS Sports Network – the first time since 2012 that the World of Outlaws have been live on national television.

He and reigning champion Brad Sweet thrilled fans watching around the world and at the Indiana track by putting on a duel that ended with Macedo edging Sweet by 0.064 seconds at the finish line.

“When he (Sweet) passed me on the restart, I basically said, ‘I was going to commit and either crash it or try to win,’” Macedo said while trying to catch his breath in Victory Lane. “I felt really good. When your race car is really good, it’s easy to make those kinds of decisions.”

The victory is his sixth career Series win and first of 2020. He had been building to it with three top-five finishes in the last three races, but Sweet and Jacob Allen made him work for it.

The trio turned the 40-lap Feature into an exhibition of slide jobs and close quarter racing.

Macedo, of Lemoore, CA, started on the pole due to his DIRTVision Fast Pass Dash win. Allen lined up alongside him and Sweet started fourth.

When the green flag dropped, Macedo darted ahead of Allen in the opening laps, but soon became prey to Allen’s Shark Racing #1A when he hit traffic on Lap 12. Sweet moved into third on the second lap.

Like Macedo, Allen, of Hanover, PA, was just as hungry for the win as he continues to seek his first World of Outlaws win.

The two young guns battled side by side for several laps. While Macedo ran high, Allen continuously dove underneath him into the turns but Macedo always had the better run off the turns to launch ahead of the Drydene car down the straightaways.

While they dueled, Sweet closed in. He got by Allen for second on Lap 25 and then ran down Macedo and took the lead four laps later.

However, before he could try to set his own pace out front, a caution came out that saw the end of Allen’s career best performance at the quarter-mile track.

Justin Peck spun in Turn 2, directly in Allen’s line. With nowhere to go, Allen slid into Peck and punctured his right rear tire.

Allen ended the night 13th, but the disappointing finish didn’t puncture his spirit.

“This is a track me and Logan… I’ll saw just me, have really struggled at,” Allen said after the race. “I don’t think I’ve ever made it out of the [Last Chance Showdown] or anything like that. Obviously, this is a big improvement. Just an unfortunate circumstance to get in an accident there, but I’m not mad. I was pretty happy with the race me and Macedo had going on for the lead. I thought that was a lot of fun. I hope the fans enjoyed that.”

With 11 laps to go, the field lined up two by two – a benefit for Macedo, who would restart on the outside of Sweet.

When the race resumed, Macedo continued to master the high side of the track and surprised Sweet by driving around the outside of his NAPA Auto Parts #49 and reclaimed the lead.

Macedo held command out front for the remaining laps, but Sweet found grip around the bottom in the closing laps and reeled the black #2 car in. When they drove off Turn 4 for the final time, Sweet snuck underneath Macedo and the two drivers drag raced to the finish line with Sweet inching further alongside Macedo the closer they got to the finish line.

“He (Sweet) definitely made me earn it there,” Macedo said. “My car was incredible. I knew I was really good. I feel like at the beginning of the race I could set a really good pace. Just had a lot of balance. I think lap dirtied up my racetrack more where I was running. I was debating if I should move around or not.

“I think I got to traffic the first time by Lap 10 or 12. I started moving around. I thought maybe if I diamond off the corner it would be better, but I think I was losing ground. I started doing that at the end and Brad was able to get back to me. He’s a World of Outlaws champion for a reason and he made me earn it.”

Sweet’s runner-up finish is his third top-five in a row and helped him further extended his points lead over 10-time Series champion Donny Schatz – who finished 16th. He now leads Schatz by 66 points.

“It was nice to contend for the win,” Sweet said. “A little disappointed in myself. On that restart I knew I was going to be in a vulnerable place. I didn’t want to choose the top. I wanted to run the bottom and control my own destiny. I felt like I spun my tires a little… I think Carson, I think he really wanted that one bad and probably just laid her in there and he kind of surprised me that he made it around the outside.”

At the end of the night, Macedo was able to roll his car in the trailer in one piece and walk away with the trophy.

The World of Outlaws NOS Energy Drink Sprint Car Series returns to Jackson Motorplex June 25-27 for the prestigious Jackson Nationals with $30,000-to-win on the line for Saturday’s race. You can purchase tickets for the event by clicking here.

If you can’t make it to the track, you can watch all of the action LIVE on DIRTVision.