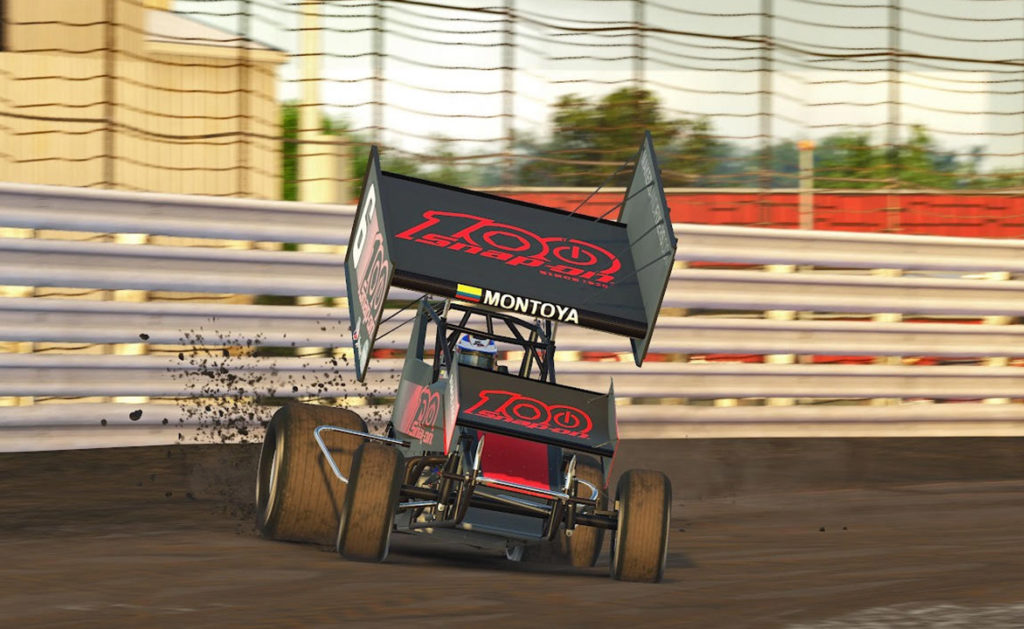 Juan Pablo Montoya is a two-time Indianapolis 500 champion, three-time NASCAR winner, seven-time Formula 1 winner and the 2019 IMSA SportsCar Champion. This year, he could add a World of Outlaws NOS Energy Drink Sprint Car Series win to that long list, too – a virtual win.

Montoya joined the World of Outlaws NOS Energy Drink Sprint Car iRacing Invitational league at the virtual Knoxville Raceway event in early April. He enjoyed it so much that he’s now a regular to the series.

“I had never run a dirt race on iRacing until that World of Outlaws invite,” Montoya said. “I was always a PC racer and I did some online dirt racing when I was younger, but nothing recently. That race has me excited to do more because it was a lot of fun. I always finish with a smile after these races.”

Growing up in Bogota, Columbia, go-karts and open-wheel racing were his prime connection to motorsports. Dirt racing wasn’t yet on his radar. It wasn’t until he began his NASCAR career in the early 2000s that he was introduced to the dirt track world.

Montoya got his first taste of dirt in 2007 when he participated in the Prelude to the Dream at Eldora Speedway, driving a Late Model. He had a respectable run, finishing 15th after starting 25th. The taste for dirt racing stuck in his tongue even since.

“I love it,” Montoya said. “I really enjoy driving the heck out of those (dirt) cars. There is something about it, but I can’t tell you exactly what it is. It’s just a lot of fun because you can just throw them around. It’s so different than asphalt.”

When NASCAR went to Watkins Glen International Raceway in Watkins Glen, NY every August, Montoya said he would always go watch Tony Stewart race his Sprint Car around the state.

“I went to them just for fun,” Montoya said. “It was insane but very cool.”

When given the opportunity to join the World of Outlaws iRacing Invitational at Knoxville Raceway, he didn’t hesitate to get behind the wheel of a virtual 900hp World of Outlaws 410 Sprint Car.

After spending most of the Feature in the top-10, he got caught up in a wreck and ended the 35-lap race in 17th. The result didn’t diminish his interest in Sprint Car racing, though. It increased it. He’s so far raced every race after.

He didn’t qualify for  the Feature at Lernerville Speedway, but after a thrilling Last Chance Showdown battle, Montoya made the Feature at the challenging Williams Grove Speedway and finished 15th. On Tuesday, April 28 on CBS Sports at 8 p.m. (ET), he’ll get the chance to compete at a track he’s already made laps at before – the virtual half-mile Eldora Speedway.

Montoya continues to improve every time he signs on to an iRacing event. He recently won an eSports racing event with The Race series. Before this year, Montoya had little iRacing experience. He was into it more years ago, he said, but hadn’t used it much until the racing world went on pause.

“We do a lot of simulator work but not a lot of iRacing work,” Montoya said. “I do have a professional unit at home with a brand-new computer so that makes a world a difference.”

He joked that one of the most challenging aspect of racing in the World of Outlaws iRacing events is you can’t just hold the cars “wide open.” He added that he’s back to using “NASCAR terms” suck as “slick” and “snug” when describing how his car is handling.

“I really learn a lot by watching the Heats of the other guys racing, so that is helping tremendously,” he said. “You have to put in the time to be good.”

While he has a season of IMSA SportsCar racing with Team Penske to look forward to once racing resumes, for now, he’s enjoying his time as a virtual Sprint Car driver.

“I always look forward to the next one after I’m done,” Montoya said. “You can just hustle these cars so much.”

Don’t expect to see his virtual love of racing Sprint Cars translate to the real thing anytime soon. He joked that he doesn’t think his wife would let him. However, he wouldn’t be opposed to testing one.

Has a blast tonight. Got wrecked on the b main. Loved driving those cars. @Snapon_Tools @PenskeESports https://t.co/8ys66a0tNK

Calling the action will be veteran motorsports broadcaster Dave Rieff, NASCAR and DIRTcar UMP Modified star Kenny Wallace, and of course, the Voice of the Outlaws Johnny Gibson.