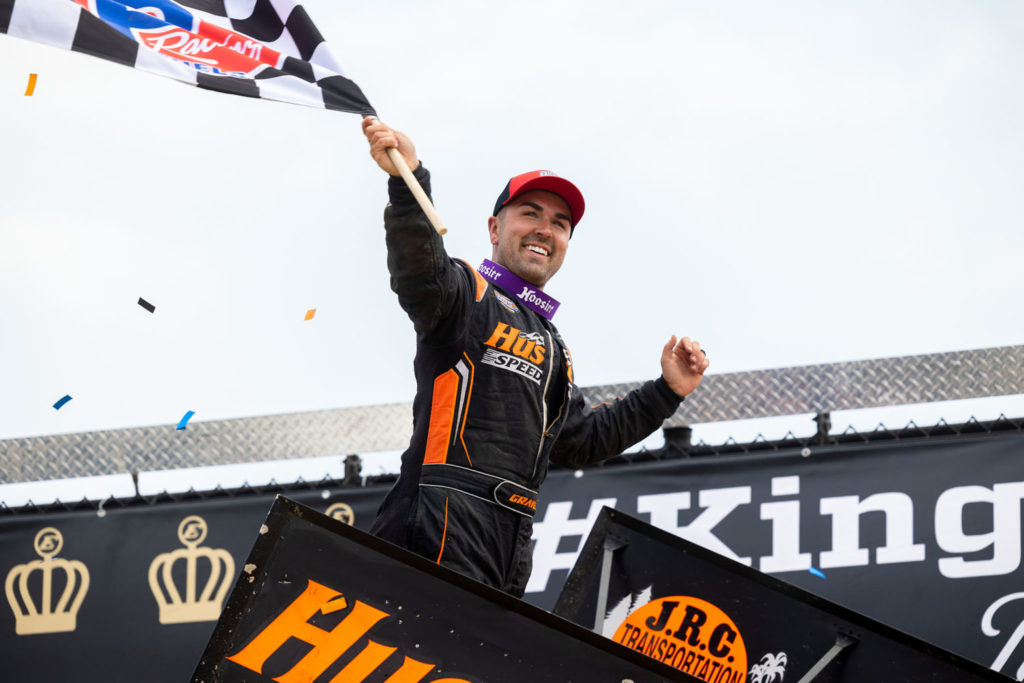 For the second time in a span of three days, David Gravel once again found Eldora Speedway Victory Lane at a Crown Jewel prelim. On Wednesday, it was Joker’s Wild; today, it was The Knight Before.

Starting from fourth in the postponed Feature on Saturday afternoon, Gravel quickly worked forward in the Big Game Motorsports #2. He drove by the current championship leader, Brad Sweet, to take second on Lap four and completed a super slider on Rico Abreu to steal the lead on Lap 9.

From there, it was a  bout of lap traffic and tire conservation in the 25-lap afternoon delight special. The Watertown, CT native had just enough tread left on his Hoosier Tire and cleared the scales post-race to score the victory by a margin of victory of 1.409-seconds.

His second win of the week and fourth win of the season brings him to 73 career World of Outlaws NOS Energy Drink Sprint Car Series wins, giving him sole possession of 12th on the All-Time Win List.

It’s his fifth-career Eldora Speedway victory and offers a big boost of confidence and momentum into tonight as the 30-year-old chases his first Kings Royal crown. He’s topped the Knoxville Nationals and National Open, but the throne and $175,000 payday still eludes him.

“Live I’ve been saying, we’re extremely consistent and right there ready to challenge for wins, we just needed a little tweak,” Gravel commented. “Sprint Car Racing is the toughest it has ever been and every single position, every single win is hard to come by. The day show isn’t ideal but the drivers, track, and fans all made the most of it I think. It feels damn good to grab two already this week, now we just need to add the big one tonight.”

By virtue of his victory this afternoon, Gravel once again reserves the right to qualify whenever he would like during Kings Royal Qualifying this evening.

“That takes a lot of stress off,” he noted on the unique advantage. “We’re probably gonna go fairly again and try to set QuickTime. Then we just need to win that Heat from fourth and go after that money.”

With the preliminary action all wrapped up, teams are now focused on the 39th Kings Royal tonight on DIRTVision, an event offering a $175,000-to-win, $5,000-to-start Feature.

After leading the opening nine laps, Rico Abreu of St. Helena, CA slipped back to finish second after Gravel cleared him with a slider through traffic. It’s his second podium of the week at Eldora Speedway and only adds more momentum ahead of tonight’s 39th Kings Royal.

“We’ve got such great balance right now,” Abreu noted. “This Rowdy #24 is awesome to drive right now. It’s a pleasure working with Ricky [Warner] and the rest of these guys. Shoutout to you fans for packing this place, even for a day race. We’ll get this thing in Victory Lane soon.”

“We’ve got a big night ahead of us,” Sweet said. “I wasn’t good on the starts today, it just felt like I was spinning the tires so bad. I knew we needed lap traffic to have a shot, but David beat us there when Rico got hung up. I could see it all unfolding in front of me, but there was just nothing I could do about it.”

Rounding out the top-five in Saturday afternoon’s program was Spencer Bayston in fourth aboard the CJB #5, and Hunter Schuerenberg in fifth aboard the Tony Vermeer #55.

Carson Macedo earned the KSE Hard Charger Award with a sensational 24th-t0-sixth run aboard the Jason Johnson Racing #41, matching the largest charge of the 2022 season. Closing out the top-10 behind him was Giovanni Scelzi, Donny Schatz, Anthony Macri, and Justin Peck.

UP NEXT (Wed-Sat) – The World of Outlaws NOS Energy Drink Sprint Car Series concludes a week of racing tonight with the 39th Kings Royal offering a $175,000-to-win, $5,000-to-start Feature. Fans can BUY TICKETS HERE, or watch every lap LIVE on DIRTVision.