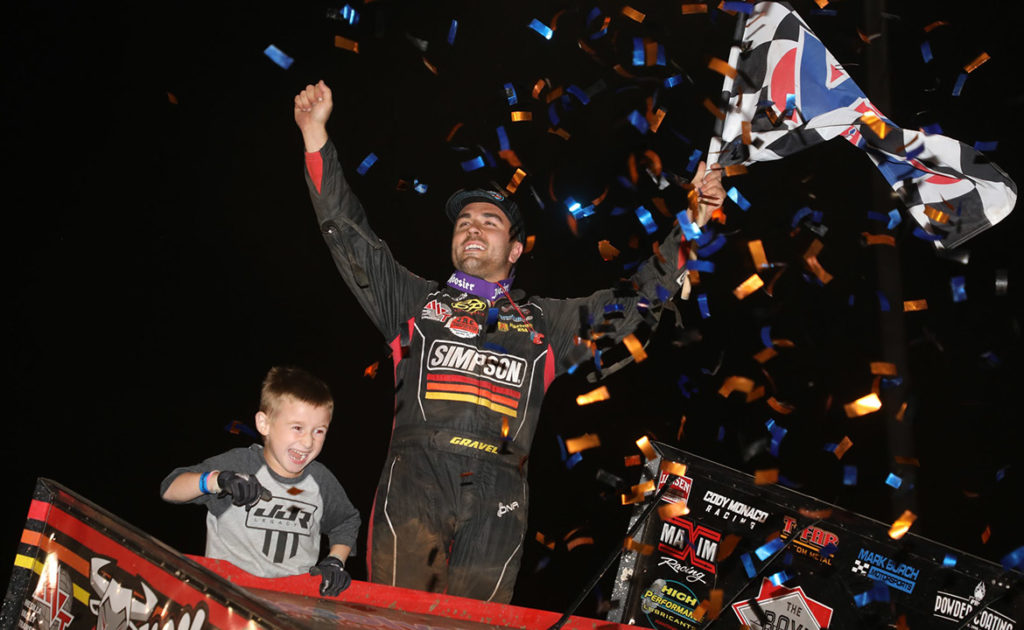 The No. 41 Jason Johnson Racing Sprint Car roared around Lernerville Speedway with the ferocity of a starved stomach. It was a manifestation of the driver’s mentality.

David Gravel was hungry for a big win. After three podiums in-a-row at Eldora Speedway, leading up to the Kings Royal, he had to settle for a fifth-place finish at the prestigious event. His appetite was not appeased.

On Tuesday night at the $25,000-to-win Don Martin Memorial Silver Cup, the Watertown, Conn.-native was not going to let his hunger go untamed again. He led 26 laps of the 40-lap Feature, lapped up to 13th and crossed the finish line four seconds ahead of second-place to claim his third win at Lernerville Speedway and fifth World of Outlaws NOS Energy Drink Sprint Car Series victory of the year.

“Our team deserves a win after a week like last week (at Eldora),” Gravel said. “To make it a $25,000 win is good. You want to win Jackson (Nationals). You want to win the Kings Royal. But this will do for now.”

He secured the win by finding grip where few others could.

He nearly won his Drydene Heat by running the middle and bottom of the track, while leader Donny Schatz relied on the top. Gravel then went on to finish fourth in the DIRTVision Fast Pass Dash, continuing to test the lower groove of the track.

He was picky with the set up, he said. The Jason Johnson Racing team worked on it all night to get the car right for the Feature.

When the 40-lap event went green, second-place James McFadden, in the Wicked Energy Gum No. 9 car, blasted by polesitter Shane Stewart for the lead and clung to the high side of the track. Running the middle lane behind him, Gravel went from fourth-place to second in the first corner.

Neither could build run as the caution came out on the first lap for a car stopped in turn two.

When the race went back green, Gravel dove under McFadden in turn one, but didn’t have a strong enough run off the corner that could compete with the momentum McFadden carried around the high side of the track.

McFadden began to pull away running the top, while Gravel worked the middle of the track. Five laps later, another caution.

On the restart, Gravel attempted another dive bomb underneath McFadden into turn one. This time, he was ahead of the Australian exiting turn two, but McFadden, again, had the faster run off the corner and sprinted back to the lead.

Behind them, Kyle Larson lurked. He had already made his way from sixth to third. The NASCAR-star, and Series team owner, poked his nose under Gravel into turn one, but Gravel got to the throttle quicker and launched off the corner.

While McFadden mostly stuck to the high line, Gravel found his rhythm through the middle lane. With 25 laps to go, Gravel placed his Mesilla Valley Transportation No. 41 in McFadden’s peripheral view through turns three and four. McFadden had the stronger run off the corner and ducked to the bottom of the track in turn one. Gravel switched his line to the high side and drove around McFadden for the lead off turn two.

“I think he never ran the line I did,” Gravel said. “He ran high and he kind of ran lower. Sometimes it’s better to run second. Kind of had a line figured out that I ran all night long. We got the car better to run it.”

Four laps later, Larson made his way by McFadden for second and began his quest for back-to-back Silver Cup victories. Halfway through the race he began to close the gap on Gravel. And lap traffic was in sight.

However, the slower traffic seemed to only make Gravel faster. With 11 laps to go he began to extend the distance between he and Larson. With three laps to go, he had a 4.6 second advantage over the No. 57 car and had lapped 13th-place Ian Madsen.

“I thought I had a shot the first time we got to little bit heavy traffic, but once we got to the heavier stuff he did a really good job getting through it,” Larson said. “I didn’t really feel like I got hung up, he just got through it really fast. I just needed a little bit more to be able to move around and run the lines he was running.”

The last five laps were tricky, though. Gravel said the track got slick and he “was just holding on” at the end. Larson closed the gap to about four seconds at the end, but Gravel held on to claim his second Silver Cup win and 44th career victory.

“It’s awesome to win another one of these,” Gravel said.

However, points aren’t the main focus at the moment. He wants to win. With $28,000 on the line this weekend during the doubleheader at Williams Grove Speedway and the $150,000-to-win Knoxville Nationals coming up, there are still several big races to crave during the “months of money.”

“There’s more money on the line the rest of the year, so hopefully we can keep this rolling and win some more big races,” Gravel said.

The World of Outlaws NOS Energy Drink Sprint Car Series on Friday, July 26, and Saturday, July 27, will be at Williams Grove Speedway in Mechanicsburg, Pa. for the Champion Racing Oil Summer Nationals. Get tickets and more information.