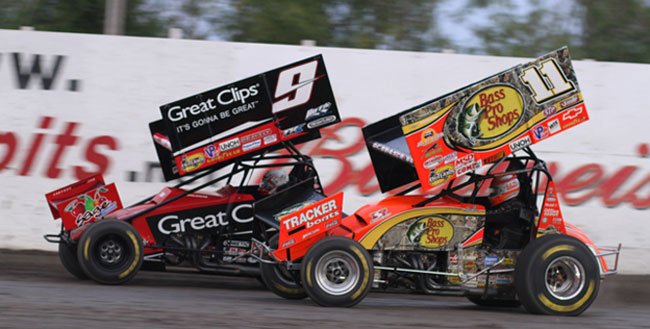 On Tuesday, July 17, the high-banked, 4/10-mile track hosts the 21st annual Don Martin Memorial Silver Cup – a unique event with a pair of $10,000-to-win, 30-lap features in honor of longtime track owner Don Martin. The World of Outlaws Sprint Car Series event will also be filmed to air on SPEED later this summer.

Since 2009, the special event showcases two features. The show runs like a usual World of Outlaws event until after the checkered flag is waved on the initial 30-lap feature. After a short intermission, the second 30-lap feature is lined up based on an invert of cars on the lead lap from the first feature. The overall winner is one of the segment winners who has the best average finish between the two main events, earning a $5,000 bonus.

“It is different and the fans seem to like it, and that’s all that counts,” Steve Kinser said. “No matter what we do, it’s a track we run good at. I’ve been going there a long time and still enjoy it every time I go there.”

The top three in the current standings – Kinser, Donny Schatz and Sammy Swindell – have combined to win eight of the previous 19 Don Martin Silver Cups (the 2003 race was rained out).

“The first one starts out, it’s just going to be a … feature so you do your normal things,” Swindell said. “The second one, when they invert it, you don’t know what to expect.”

“Two years ago we won half of the Silver Cup, so I’d really like to win the whole deal,” said Joey Saldana, who has World of Outlaws victory and the track record at Lernerville. “You don’t necessarily have to win both races, you just have to be the highest running competitor for both races.

“That’s definitely one of the races you want to have on your resume as a sprint car driver. It’s definitely a neat format. It’s neat for the fans to see something different from what we normally do. It seems to be pretty exciting for the fans.”

Tickets can be ordered online by clicking WorldofOutlaws.com/tickets or by calling 877-395-8606. An exclusive free fan pit pass upgrade is available with the purchase of advance seating.