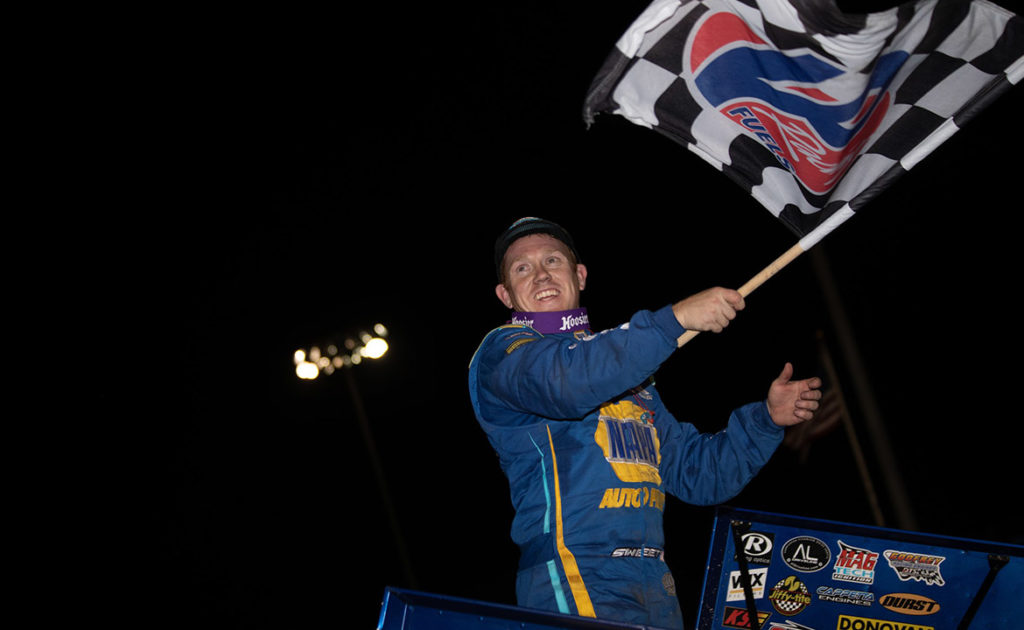 After losing 18 points to championship contender Donny Schatz during the first round of the Outlaw Boot Hill Showdown doubleheader at the raceway Friday night, Sweet looked to be dealt a new hand in round two.

He got it and played it, leading all 31 laps – due to a green-white-checkered – to claim his first Dodge City Raceway Park victory, his 15th World of Outlaws NOS Energy Drink Sprint Car Series win of the season and the $12,000-to-win pot.

“This hasn’t been my best track, so to get a win here I think is one of those things where we have to take the positive here and just move on to the next one and keep focused on what we’re doing here,” Sweet said. “Sometimes it seems like we’re getting a little off track or getting a little confused and trying things and we just need to stick to what we know and finish the year as strong as possible.”

The biggest turning point of the night for him was his Drydene Heat race performance. Sweet had qualified 12th – worse than his 10th-place qualifying run Friday night. That placed the Kasey Kahne Racing driver fourth in his Heat race. However, on the start, “The Big Cat” was ready to pounce. He sprinted by the third and second-place car on the first lap and held on to second, racing his way into the DIRTVision Fast Pass Dash.

The Dash draw – with the pole position and the sixth-place starting position still available – came down to Schatz and Sweet. Schatz drew the number six, leaving the pole for the Californian.

Sweet went on to win the Dash, while Schatz, who won Friday night’s race, put on a show behind him. With the help of a few slide jobs, Schatz raced his way to third, lining himself up directly behind Sweet for the 30-lap Feature.

When the green flag hit the air Sweet sprinted to the lead over second-place Ian Madsen. Schatz couldn’t keep up. He found himself in a duel with Sheldon Haudenschild for third-place. The young Ohio-native stole the position from Schatz on the first lap. The reigning champion threw a slide job at Haudenschild into turn one the next lap to take the spot back, but Haudenschild powered back by him down the backstretch.

Sweet hit lap traffic by Lap 6. Most of the slower cars ran low allowing Sweet to hold his line up high and cruise by them. Others blocked his line, forcing him to either slow his entry to not hit them or choose an alternative route around them.

The traffic allowed Madsen to close on Sweet, but also slowed him at times, too.

On Lap 9 the No. 91 of Jeff Stasa blocked Haudenschild’s run into turn two, forcing him to hit the brakes. While the NOS Energy Drink No. 17 slowed, Schatz stayed in the throttle and darted by Haudenschild to reclaim third.

Along with the slower cars, drivers also had to battle the high winds racing around the track.

“The car just does two completely different things at both ends here,” Sweet said. “Driving into the wind you feel like you have tons of down force and the car lays left and when you’re going away from the wind the car wants to pick up and do some crazy stuff. It was definitely good to be out front. Clean air was definitely a bonus tonight.”

The first caution of the night came out on Lap 17 for the No. 9x of Jake Bubak blowing a right rear tire and coming to a stop in turn two. Sweet now had Madsen – hungry for a win with his last one coming in March – at his rear bumper.

However, the NAPA Auto Parts No. 49 car was strong on restarts. Sweet hammered the throttle, blasting through the tunnel of wind, and shot back to a straightaway lead over the Australian driver.

When Sweet hit lap traffic again Madsen and Schatz closed the gap. But once Sweet was back in clean air, he continued to distance himself from the Aspen Air No. 18 of Ian Madsen and Toco Warranty No. 15 of Schatz.

On the final lap of the race, with the victory in sight, red lights flashed around the raceway. Dominic Scelzi flipped in turn three, bringing out the red flag. Madsen had another shot at the win.

The pressure didn’t get to Sweet, though. He said he kept his composure and continued to run his race.

“I think I did a pretty good job at it,” Sweet said.

He did. When the green flag flew for the final time, Sweet gapped Madsen by about three car lengths and drove off with the win. Madsen had to settle for second and Schatz third.

Madsen admitted he knew he didn’t have anything for Sweet on the final restart. He could catch him in lap traffic but once Sweet was in clean air it was tough to close in.

“It’s really tough out here to beat anyone in clean air,” Madsen said. “But it’s an awesome result for us tonight, to get up on the podium. We’ve had some bad luck lately. It’s great to be back up here.”

Schatz also stated he felt like he had a chance to catch Madsen and Sweet in traffic, but every time he got close the caution came out.

“That’s the way it goes,” he said. “That’s racing. You’ve got to be consistent on the days you can’t win and today is one of them days.”

The victory also saw another big achievement for Sweet. He won his 49th career World of Outlaws victory driving the No. 49 Kasey Kahne Racing car.

“It’s actually really cool,” Sweet said. “I never would have imagined that I would get close to fifty World of Outlaws wins, so it’s a milestone to be proud of for myself, for Kasey giving me the opportunity to be on the Outlaw tour for six years with his team.

“I’ve had a lot of crew chiefs and a lot of ups and downs through it all, so to be having this season is what we all strive for and what we knew we were able to accomplish. So, it’s nice to get those stats. Hopefully it’s just one of the many milestones that will pass through in my career.”

The World of Outlaws NOS Energy Drink Sprint Car Series on Wednesday, Sept. 25, will be at Jacksonville Speedway in Jacksonville, Ill. Get tickets and more information.