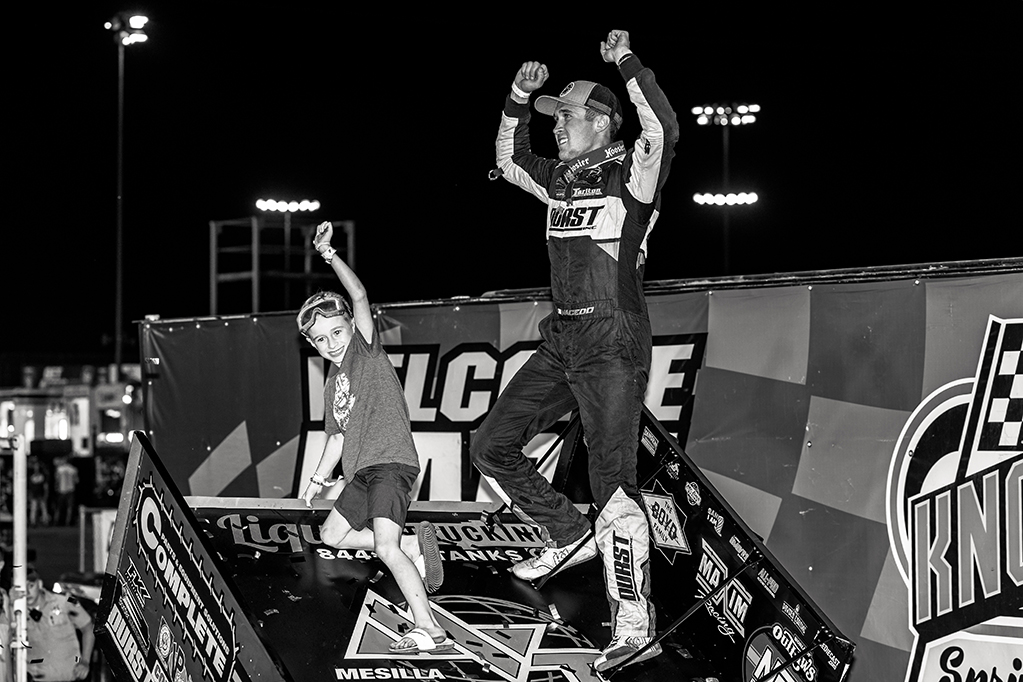 It’s safe to say that Carson Macedo is ready for August.

After a weekend sweep of the Brownells Big Guns Bash, the Jason Johnson Racing driver will enter the 60th running of the NOS Energy Drink Knoxville Nationals pres. by Casey’s General Stores with all of the momentum on his side.

The Lemoore, CA native looked like he was out of it on Saturday night, losing the lead to Kerry Madsen on Lap six and eventually falling to third, but the resilience was undeniable as he rallied through lap traffic and offered up a last-lap pass for the win that brought the Knoxville Raceway crowd to their feet.

It was a game-changing weekend for the 25-year-old, who tacked off several accomplishments. He finally got his first 410 win at Knoxville, won back-to-back with the Outlaws for the first time ever, soared to 11 career Outlaw wins, and hit his fifth Outlaw win of the season, already the winningest year of his career.

“My car was good the whole main event,” Macedo mentioned. “I just didn’t know where to be at times. When I was leading I thought I was plugging nice laps on the bottom, but then Kerry got a lane move me. In traffic, he was so superb. When Sheldon got by me, I realized how much better the bottom was if I was patient. I realized Kerry was making the same mistake like fading off from the corner exit. I was trying to set him up for the last corner, but it worked out down the backstretch.”

After scoring the DIRTVision Fast Pass Dash win, Macedo was set up nicely to score two in-a-row. He led the opening five circuits aboard his #41 ride, but Madsen went one lane higher through turns one and two and zoomed right by him, placing the Tony Stewart/Curb-Agajanin Racing #14 in the top spot.

Madsen looked dominant at times, especially in lap traffic as he zigged and zagged by the back markers and pulled away from Macedo.

It seemed as if it was over in the closing stages when Macedo slipped to third as Haudenschild rose to the occasion and drove his NOS Energy Drink #17 to second. However, a fire got lit under the #41 and he came roaring back.

Macedo got Haudenschild back on Lap 19 and quickly tracked Madsen down as he figured out the black zook clay on the 1/2-mile. As the white flag waved, Macedo perfected the bottom of turns one and two and capitalized as Madsen’s #14 drifted high and left the door open.

In turn, Macedo walked right through the door and ran away to a 1.120-second advantage to officially sweep the weekend.

“Two in a row is pretty cool, man,” Macedo admitted. “You’re seeing the fruit from everything that Jason [Johnson] built here. I’m looking forward to the future with Philip Dietz. It’s no secret Knoxville is a chess game and I’m feeling better about this place every time.

For the second-straight night, Kerry Madsen of St. Mary’s, NSW, AUS was forced to settle for a podium bid after leading laps. The 25-time World of Outlaws winner was obviously frustrated with letting a win slip away, but the success in his short time at Tony Stewart/Curb-Agajanian Racing isn’t lost on him.

“I just got tight and screwed it up,” Madsen acknowledged. “I have to apologize to this team. I should’ve brought that home. This thing is so fast, and so fun to drive. It’s all a testament to TSR as an organization.”

Settling for the final podium position in third was Sheldon Haudenschild.

“My guys have got me feeling good at this place,” he said. “We were there at the end and there’s not much more you can ask for. We’re learning and we’ll keep ripping.”

Closing out the top-10 on Saturday night was Aaron Reutzel in sixth, Brent Marks in seventh, James McFadden in eighth, Parker Price-Miller in ninth, and Brian Brown in tenth.

UP NEXT: The World of Outlaws NOS Energy Drink Sprint Car Series now turns its attention to a triple-header next weekend. The Greatest Show on Dirt will race at 34 (IA) Raceway on Thursday, June 17, Dubuque (IA) Fairgrounds Speedway on Friday, June 18, and Beaver Dam (WI) Raceway on Saturday, June 19.