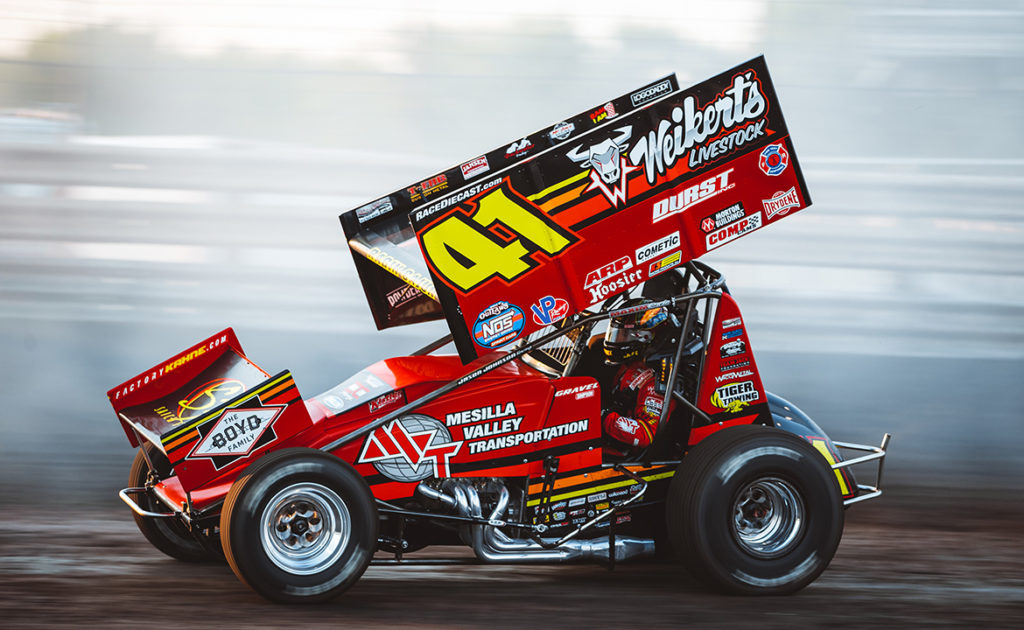 Shane Stewart has been tabbed to drive Jason Johnson Racing’s #41 car this weekend and keep their championship hopes alive while David Gravel competes with the NASCAR Truck Series.

Stewart, of Bixby, OK, will run the car for his late friend’s team at Lakeside Speedway (Oct. 16) and at Lake Ozark Speedway (Oct. 17) for the second annual Jason Johnson Classic – which will pay $15,000 to win. Gravel will drive the Dietz Motorsports #14 at Lakeside and will return to the #41 car at Kokomo Speedway (Oct. 24).

“It’s an honor to drive the JJR car this weekend for many reasons,” Stewart said in a tweet.

Jason Johnson Racing is in the middle of a tight battle for the World of Outlaws NOS Energy Drink Sprint Car Series team championship, currently sitting 12 points behind Kasey Kahne Racing for the title lead with five races remaining. The team has collected six wins, 28 top-fives and 42 top-10s so far this year with Gravel and Parker Price-Miller, who filled in for the absent Gravel twice.

Along with Stewart having been a good friend with Jason Johnson, he also has one of the better records among the available drivers. He’s a 35-time World of Outlaws winner, picking up his most recent win at Williams Grove Speedway this year in the Indy Racing Parts #71 car. None of those wins have come at Lakeside or Lake Ozark but he finished fourth at both Lake Ozark events in May and aside from an issue that forced him to take a 24th-place finish at Lakeside last year, he hadn’t finished worse than sixth at the track the four years prior.

His #41 car will sport the red throwback paint scheme that Gravel ran, and won with, at Knoxville Raceway in August.

With @DavidGravel going truck racing this weekend we would like to welcome @shanestewartrcg behind the wheel of the 41 for this weekends races! @parker_pm9 will pilot the 141 for @Lakeside_Spdwy and The Jason Johnson Classic @LOSspeedway! pic.twitter.com/sDiqRZMaiE

The team’s plan to run a #141 car with Price-Miller behind the wheel took a turn this week with JJR announcing that would no longer be the case “due to changes within the team.” Price-Miller has also parted ways with Dietz Motorsports, who he’s driven for all year, and will reunite with the Indy Race Parts team for the remainder of the season.

After this weekend, Stewart and Price-Miller will finish the year driving for the Indy Race Parts team.

If you can’t make it to the track, you can watch both races live on DIRTVision.

WHAT TO WATCH FOR: Five Mega Races Bring World of Outlaws to Ohio This Week