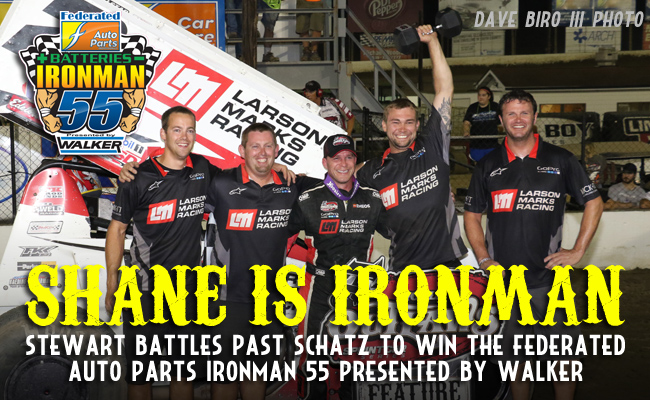 Shane Stewart Outlifts the Competition to Win the Ironman 55

PEVELY, Mo. – Aug. 8, 2015 – Kerry Madsen was the class of the field early and Donny Schatz late, but it was Shane Stewart who ultimately outlifted his competition and won the Federated Auto Parts Ironman 55 presented by Walker at Federated Auto Parts Raceway at I-55 on Saturday night.

“It feels darn good!” Stewart said of beating Schatz after finishing second to him the night before and scoring the $20,000-to-win prize. “I just can’t thank everyone at (Larson Marks Racing) enough. They work tireless hours to keep this car upfront. This win is definitely for them.”

Madsen, who won the 55-lap Ironman feature last season, started on the pole Saturday night. He jumped out to an early and commanding lead as Schatz pulled into second. Through an early caution and battles through traffic, Schatz worked to close the gap and find the right line.

On a restart on lap 13, Paul McMahan jumped two spots in his No. 51 CJB Motorsports car to third. The move set up a several lap battle with Stewart for the position. As Stewart threw sliders at McMahan, McMahan held third.

The battle for the lead was heating up as Schatz tried to find a way around Madsen. The two were side by side off of turn four on lap 23 as Schatz tried to make the bottom lane work, but Madsen maintained. As the leaders waded through lapped traffic, Schatz eventually found the opportunity he needed. After riding low, Schatz moved high and got around Madsen off of turn four as a lapped car blocked the No. 29 American Racing Custom Wheels car. Schatz took the lead on lap 33.

With Schatz now on top, Madsen faded through the succeeding laps which benefitted the No. 2 Larson Marks Racing/Eneos/GoPro car of Stewart, who moved into second on lap 34. Farther back, McMahan, who was running third, had his hands full with the No. 24 Abreu Vineyards car of Rico Abreu.

The caution flag flew on lap 44 which brought out an open red as the field had hit its allotted lap count on fuel. After making a couple of adjustments to tighten the car up, the return to green was exactly what Stewart needed. When the green flag flew once again, Stewart dove to the bottom of turns one and two and took over the lead as he and Schatz exited turn two.

One final caution on lap 47 flew for Madsen who blew a left rear tire after contact with another car. When the green flag flew again, Stewart was nervous.

“On that last restart I just didn’t know where to go,” Stewart said. “You don’t ever give the 15 a second shot at you. I was really surprised that I got by him on the bottom there on that one restart and it stuck. I was waiting for him to slide me going into three and he wasn’t there, so I was like, OK. There’s 11 laps to go, stay calm. And with the restart, I’m like… where do I go, top, bottom, top, bottom?”

Stewart chose the top on the double-file restart and held Schatz into turns one and two.

Abreu used the restart to his advantage and threw a huge slider into one and two, briefly moving around McMahan and Schatz for second. Schatz retook his spot, but the move was short lived as Abreu took over second on the next lap.

Through traffic in the remaining laps of the feature, Abreu tried to run down Stewart, but ran out of time.

The win is the first career World of Outlaws Sprint Car Series victory for Stewart at Federated Auto Parts Raceway at I-55. Stewart said the win means a lot for him and his team in their first full season with the World of Outlaws.

“When you work as hard as this team works and you can come out here and win races like this, it makes them feel good and it makes me feel good that I can win races for them,” Stewart said. “The 15, those guys work crazy hours and I feel like, to beat them, to be competitive with them, we’ve got to do the same thing. And anytime we make suggestions to put together a new car, the guys don’t even second guess it, they just get it done. To win races like that for them, it definitely makes me feel really good.”

Stewart, the 2005 Kevin Gobrecht Rookie of the Year, currently sits second in the championship points standings, 365 points out of the lead.

Abreu, who pulled double-duty Saturday night, running both in the Outlaws feature and the POWRi Lucas Oil National Midget Series feature, said the night was grueling.

“I’m really wore out,” Abreu said in victory lane. “I just tried to stay patient and not get too intense until the end. Don’t grip the steering wheel as tight as I usually do, just try to race smart – that’s one thing I’ve really been working on.”

“I had a lot of corner speed, that’s where we were really good tonight and just raced really smart. Just can’t thank (my team) enough. They work so hard outside the race track to build these racecars. They’ve been really fast this year.”

The run added to what has already been a stellar year for Abreu which has included two World of Outlaws Sprint Car Series victories.

A disappointed Schatz came into the night after winning the Monroe Shocks & Struts Prelude to the Ironman on Friday. His third place finish ended a 19 full-points race streak of him finishing first or second.

The World of Outlaws Sprint Car Series returns to action next week for the biggest week in sprint car racing – the Knoxville Nationals. The greatest sprint car drivers from around the world gather take on the historic Knoxville Raceway. To find out more information and to learn how to buy tickets, visit http://www.woosprint.com/knoxville-nationals.

RACE NOTES: Shane Stewart’s win tonight was his seventh World of Outlaws Sprint Car Series victory of the season… This was the first ever World of Outlaws Sprint Car Series victory at the track for Stewart… Donny Schatz’s streak of 19 straight first or second place finishes in full points events came to an end tonight… Joey Saldana picked up his 12th quick time award of the season with a lap of 10.641… Logan Schuchart was the night’s KSE Racing Hard Charger, advancing 16 positions to finish in eighth.