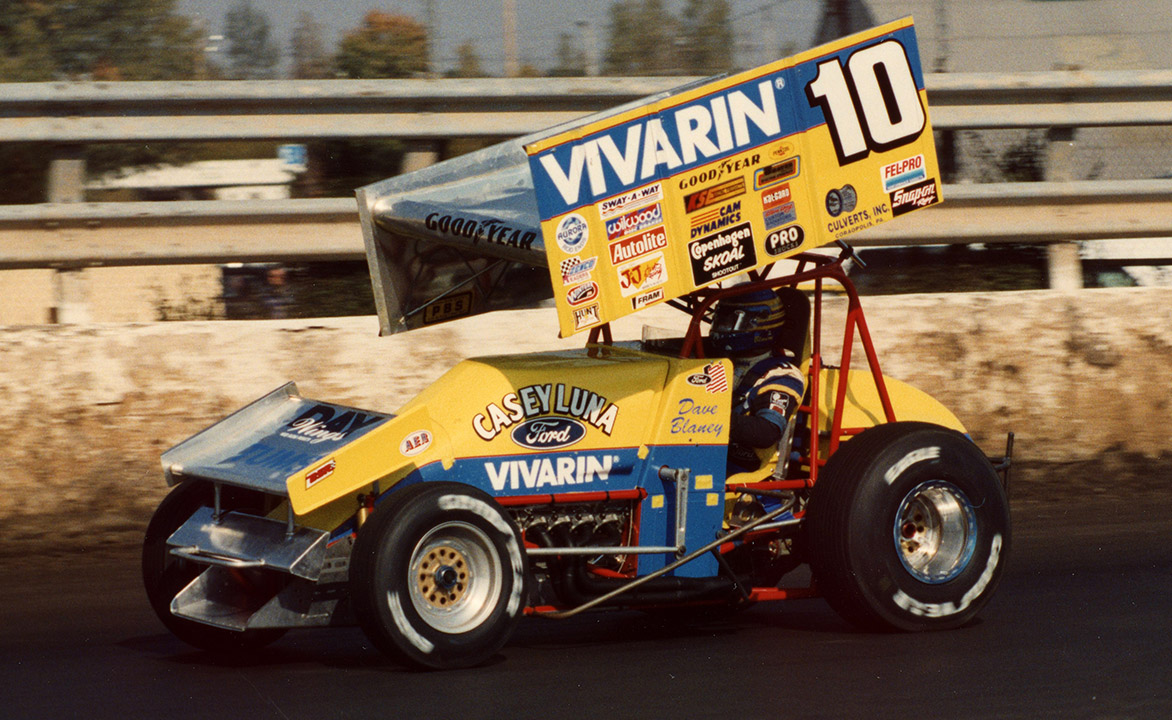 Ten minutes. The time it takes to heat a pizza in the oven and at times the length of a World of Outlaws NOS Energy Drink Sprint Car Series Feature.

That’s how long it took for Dave Blaney’s World of Outlaws NOS Energy Drink Sprint Car career to go from moderate to elite.

His 1992 season in the #7c Sprint Car — his fourth year in the car — was going poorly. Coming off a six-win season the year prior, Blaney picked up a couple of wins at the beginning of the year and juggled top-five and top-10 finishes for the remainder of it.

At 30 years old, in his prime, Blaney said he was desperate to run better. He knew he had to do something different.

Coincidentally, Casey Luna’s team, crew chiefed by Kenny Woodruff, was looking for a new driver. Knowing Woodruff already, Blaney called him to ask if he could drive Luna’s #10 car.

“He said, ‘Heck yeah.’ He called Luna and 10 minutes later it was done,” Blaney said. “Nothing elaborate. Let’s go race. We were both ready to run good.

“It was one phone call.”

The pair hit the ground running in their first season together in 1993, winning the first race of the year at Houston Motorsports Park and 14 more after, ending the year second in points to then 12-time champion Steve Kinser. Blaney finished 107 points behind Kinser, which was a major feat, considering Kinser had won the championship for the three previous seasons by more than 500 points.

“I think we surprised a lot of people in 1993, honestly,” Blaney said. “We stayed close to Steve all year in points. We ran better than even I expected, as far as winning big races, running up front a lot.”

Blaney attributed a lot of that success to his compatibility with Woodruff. They fit well, together. Woodruff wasn’t one to chit chat – much like his father Lou Blaney, he said. So, he was used to that and comfortable with that. The two were equally focused on winning.

There were about four to five events Blaney considered the echelon of races each year due to their significance and payout. In 1993 he won two of them – his first Kings Royal at Eldora Speedway and second victory at the Syracuse Mile at the New York State Fairgrounds.

He lucked into the Kings Royal victory, he said. On the final lap, going into the last corner, he was side by side with Jac Haudenschild. However, Haudenschild had the top while Blaney was in the middle.

“He had me beat,” Blaney said.

As they were rounding the turn something happened to Haudenschild’s engine. He fell and Blaney went on to secure the $50,000 win. While he didn’t feel like he fully earned the win, in 1995 Blaney said he came back and “whipped” the field to win his second Kings Royal. That made up for it.

Then in October of 1993, he earned his second big win of the year at the historic Syracuse Mile – no longer in existence. The track held sentimental value to Blaney. His father raced there for several years in a Modified. Most of those races, Blaney was there with him.

“For me it was one of the big ones,” Blaney said. “It was also cool for me too that my dad raced up there in a Modified every year. That was a cool one to win, no doubt.”

It was not an easy one to win, though. The Mile was one of the most difficult tracks to just make a lap around by yourself, Blaney said.

“If you were 10 car lengths behind a lap car going into a corner, you might slow down just to get a run on them and get by them at the flag stand or something,” Blaney said. “It was just a timing thing.”

Blaney proved to be one of the best at it. So good that he almost won the big Super DIRT Week Modified race that same weekend. He was passing cars with ease and dominating the race before a broken radius rod ended his race. Not winning the iconic Modified race in Syracuse is one of the biggest regrets of his career, he said.

There are no regrets when it comes to his Sprint Car career. He won the championship in 1995. Finished second in points in 1993, 1994, 1996 and 1997. Won the prestigious Knoxville Nationals in 1997. And has 94 career World of Outlaws victories – currently sitting eighth on the all-time wins list.

He’s not done racing, either. Blaney still has one Sprint Car he plans to run in about 10 races this year, including the May 23 Patriot Nationals at The Dirt Track at Charlotte. He’s also planning on painting it as a red and white throwback scheme to his father and putting a #10 back on it.

He joked that maybe he should’ve stayed with the World of Outlaws instead of going to NASCAR in 1998 but said he wouldn’t trade that experience – especially since it has helped his son Ryan get a prime opportunity to drive for Roger Penske in the Cup Series.

“My dad raced, and I grew up watching and had no idea if I would race,” Dave Blaney said. “I did and it took off. I guess I’m saying it’s all gravy to me. I had no expectations at all. I won a lot of good races. And raced for a lot of good people. Yeah, there are guys that won more (World of Outlaws) races than I did, but I still thought it was pretty good. I think my first win was in ’85 and last win was ’97. I thought that was kind of OK.”

All it took was one phone call and 10 minutes to help make most of that a reality.