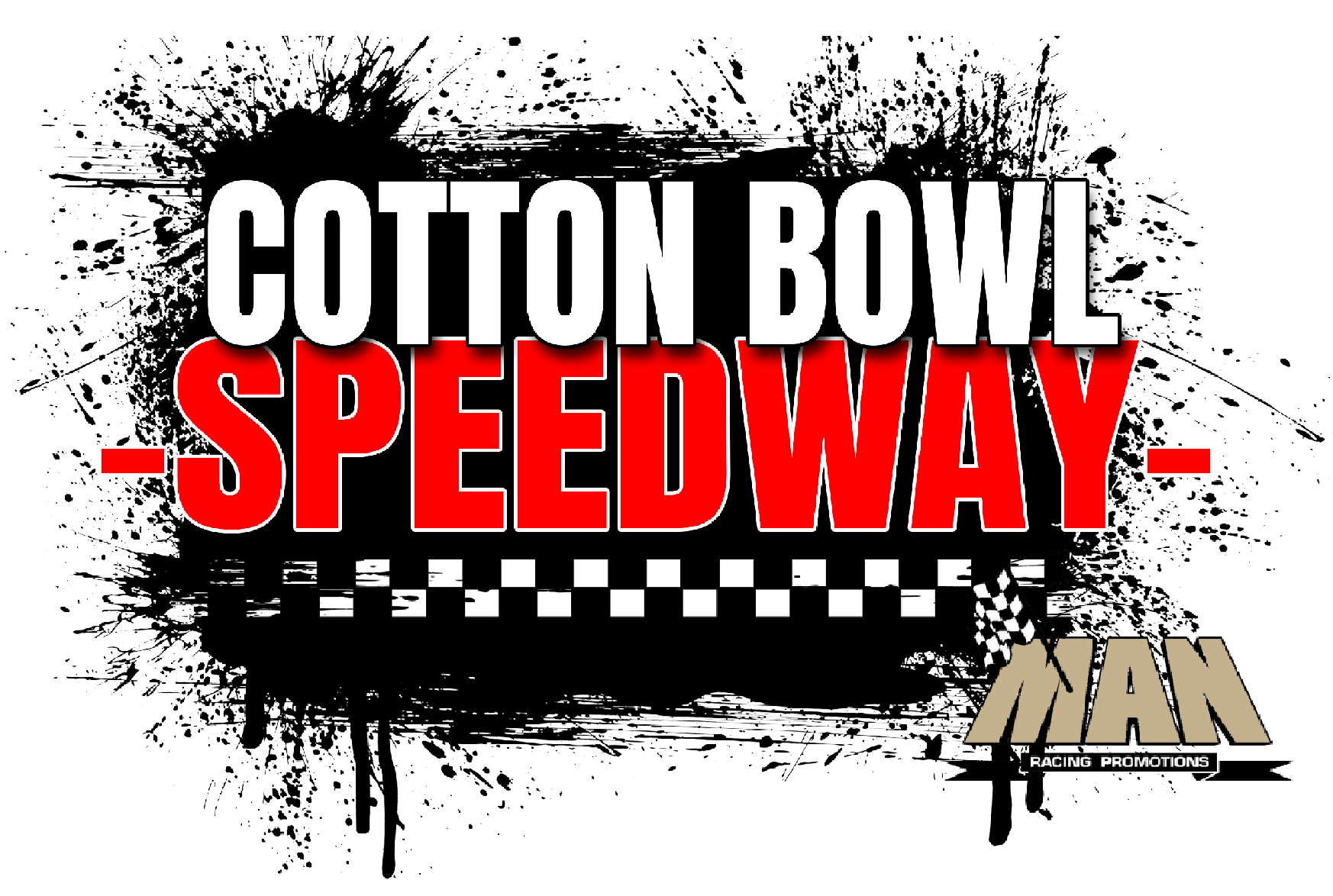 Pit Age Limit
There is not an age limit for the pit area at this event. Minors 17 and younger must submit a Parental Consent, Release and Waiver of Liability.

Personal Coolers
Coolers with beer are allowed for $10. No other food or drinks allowed. Coolers must not be bigger than 10"X13"X9". All Coolers are subject to inspection upon entering the facility.

Alcohol Sales
CBS does not sell alcohol at the track. Coolers no bigger than 10"X13"X9" are allowed in with beer only for $10. No glass bottles.

There were differences, however, and the Wooster, OH gasser noted he thought this triumph was harder to come by. It required a more patient, methodical approach to carving his way forward and ultimately parking the Stenhouse Jr. / Marshall Racing, NOS Energy Drink #17 in victory lane.

“I felt like more guys had this place figured out this year, at least as to what I was doing compared to last year,” Sheldon said after his 24th career World of Outlaws win. “It made this one a lot more wild, I mean Logan [Schuchart], Brad [Sweet], and I had a really great battle. That yellow kind of came at a bad spot for me, but I ended up catching Cory [Eliason] and I knew the exit of turn two would be good to square him up.”

A bad spot indeed, the Lap 8 caution for early leader James McFadden’s flat right rear tire slowed Haudenschild’s momentum as he caught McFadden and Eliason in a three-way battle for the lead. Sheldon then found himself in a torrid battle with Schuchart & Sweet on the restart, but soon broke away and reeled in Eliason’s Rudeen Racing #26 with some lap traffic assistance.

Haudenschild caught Eliason on the 22nd circuit and promptly cut the #17 from top-to-bottom in turn two and rocketed right underneath the #26 down the backstretch. From there, it was basically over as Haudenschild built an impressive 2.578-second margin of victory over the final nine-lap stretch.

“This NOS Energy Drink #17 team is on it,” said Haudenschild praising his SJMR crew. “[Kyle] Ripper, Stephen [Hamm-Reilly], and Jakob [Weaver] are killing it. It’s been a little slow to get the season going, so I can’t wait to get racing more and see if we can win a little bit more too.”

After leading 13 laps throughout the middle portions, Cory Eliason of Visalia, CA settled for a runner-up result aboard the Rudeen Racing #26. It’s his best finish in World of Outlaws competition since he won his second career race in September of 2018 at Calistoga, extending his victory lane dry spell to 78 races with the Series.

“He was definitely better later when we really needed it,” Eliason noted. “This track is tough already, but lap traffic adds another element to that. I knew if someone was there they were probably going to get by me once I got caught in a bad spot. We’ve still got tomorrow night to come back stronger and get one spot better.”

For the fifth time in five races at Cotton Bowl Speedway, Brad Sweet was among the podium finishers. The three-time and defending World of Outlaws NOS Energy Drink Sprint Car Series champion kept his consistent runs coming with a third-place bid for the Kasey Kahne Racing, NAPA Auto Parts #49.

“We just run really good here,” Sweet joked on his prowess at the Paige, TX facility. “You always want to win, but I think we just barely missed it on the car. I couldn’t hit the bottom quite well and I tried about 10 different ways, but I just couldn’t get it slowed down to get the car stuck. It felt a little one-dimensional stuck on the top like that. We’ll make a few better decisions and get a little better for tomorrow.”

Rounding out the top-five on Friday night was Logan Schuchart with a season-best fourth-place finish for the Shark Racing, DuraMax #1S, and Donny Schatz with a KSE Hard Charger bid from 13th to fifth in the Tony Stewart/Curb-Agajanian Racing, Ford Performance #15.

Closing out the top-10 at Cotton Bowl was Giovanni Scelzi in the KCP Racing #18, David Gravel in the Big Game Motorsports #2, Jacob Allen in the Shark Racing #1A, Spencer Bayston in the CJB Motorsports #5, and Brock Zearfoss in the Moose’s LZ Bar & Grill #3Z.

Cotton Bowl (Paige, TX) joins I-55 (Pevely, MO) as the only two tracks that Sheldon Haudenschild has conquered on multiple occasions throughout his 24-win career to this point.

A driver change for the Kasey Kahne Racing #9 resulted in the team/driver receiving the standard 90 show-up points, while Tanner Thorson was credited as an alternate and received points/pay for finishing 24th in the Feature.

UP NEXT (Saturday) – The World of Outlaws NOS Energy Drink Sprint Car Series will conclude the Texas Two-Step on Saturday, March 5 with another night at Cotton Bowl Speedway in Paige, TX. Following this weekend, The Greatest Show on Dirt heads west for a three-week trip to California including races at Tulare (March 11-12), Merced (March 18), Ocean (March 19), Bakersfield (March 25), and Perris (March 26). 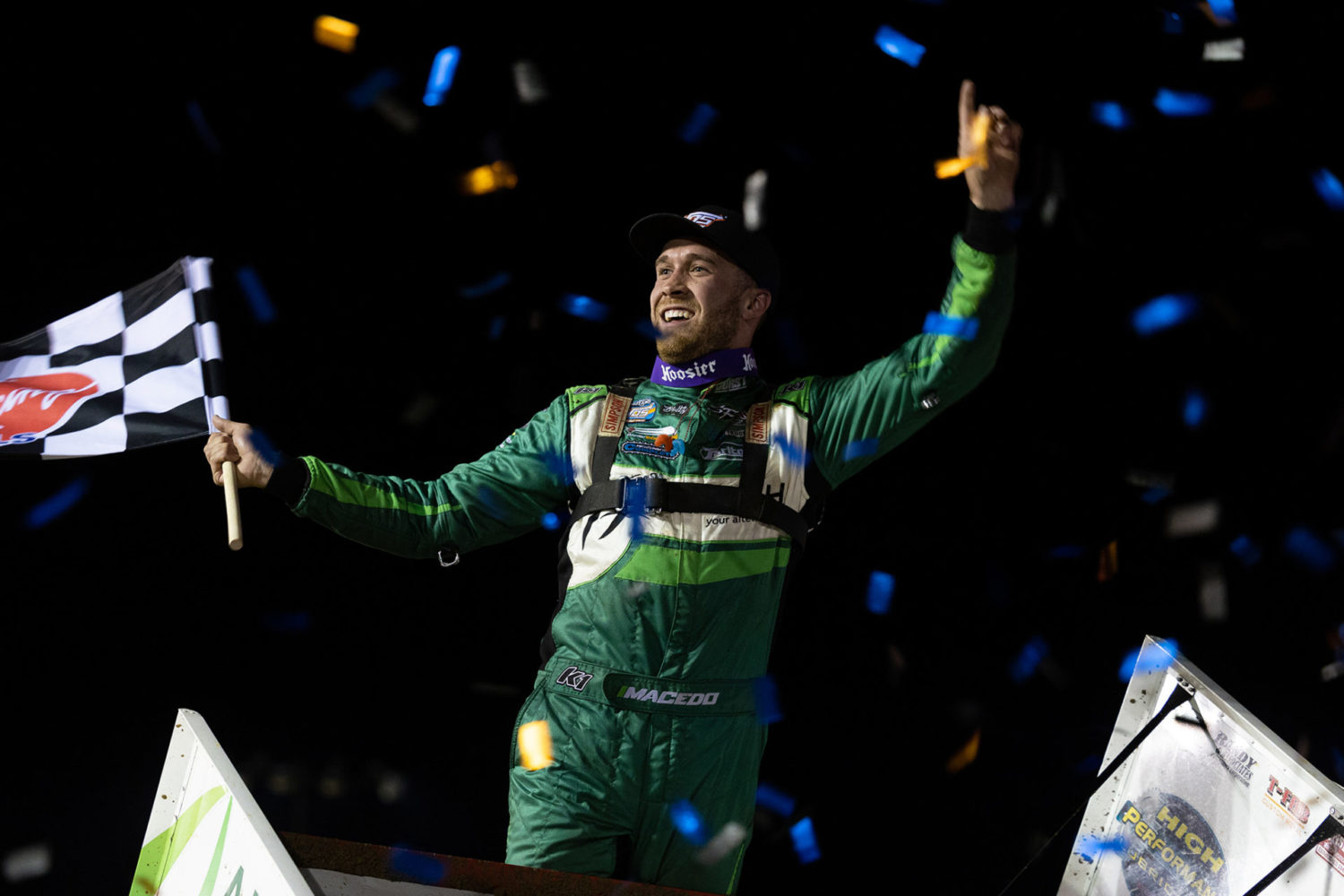 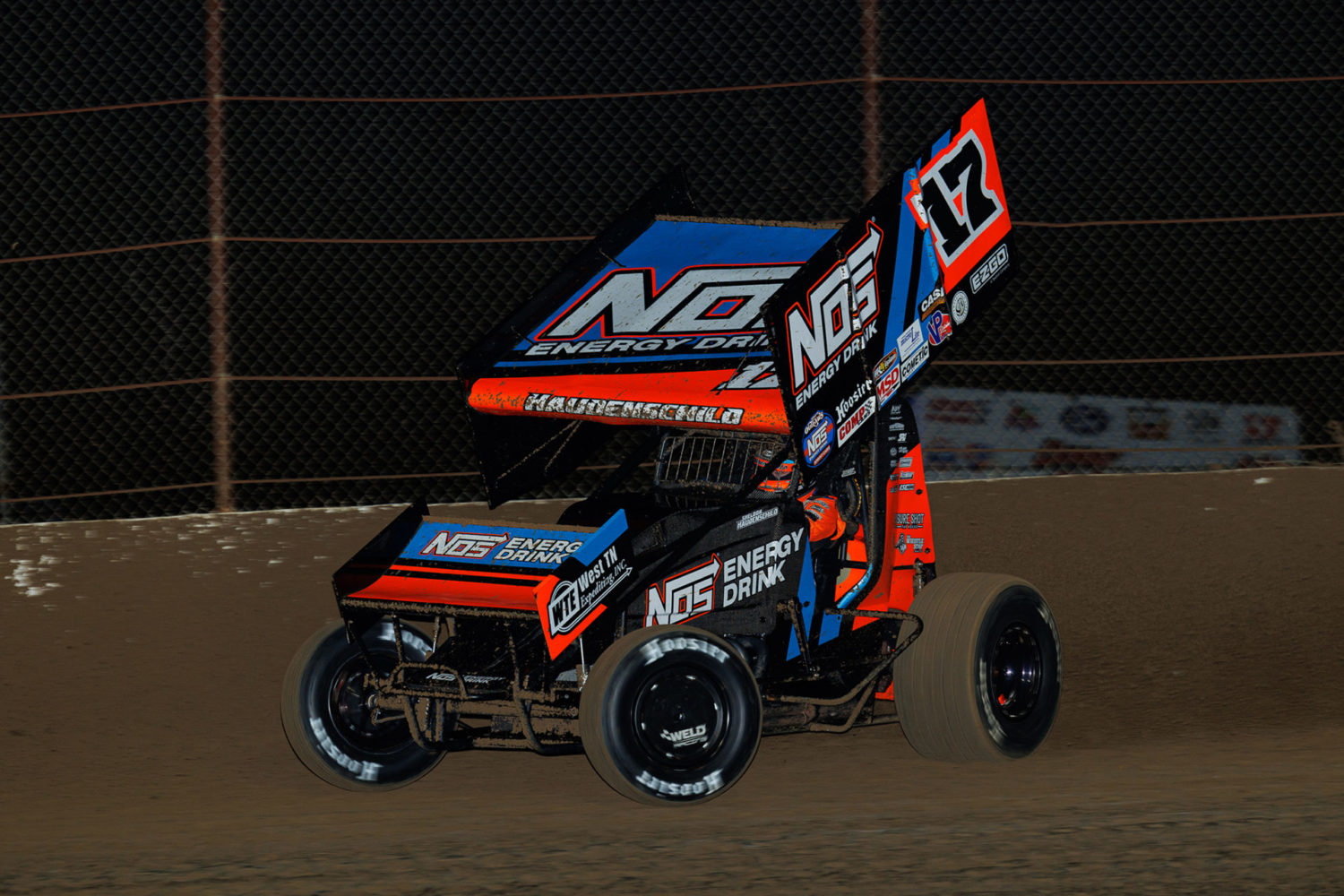 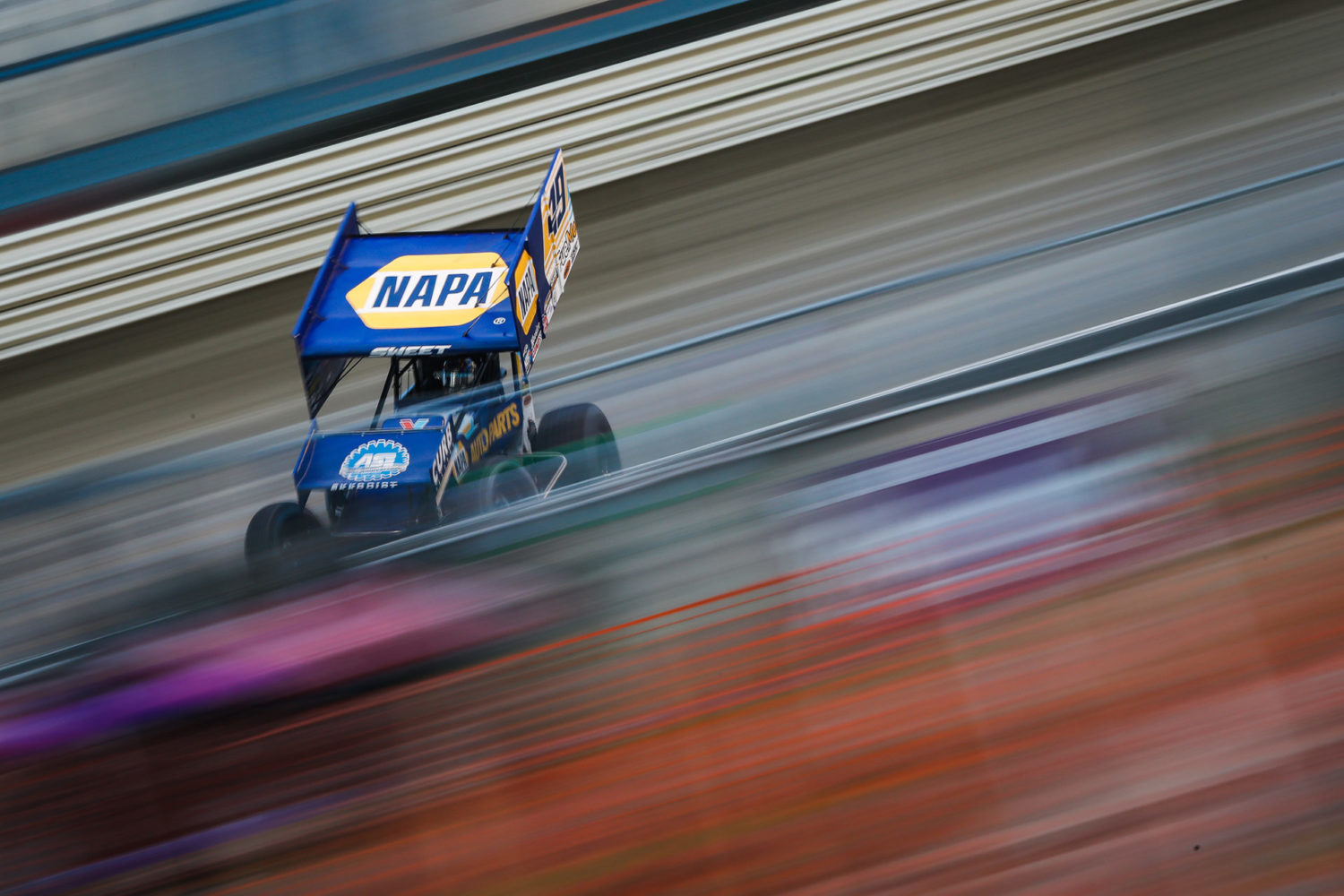 WHAT TO WATCH FOR: World of Outlaws Head to Texas for Cotton Bowl Doubleheader 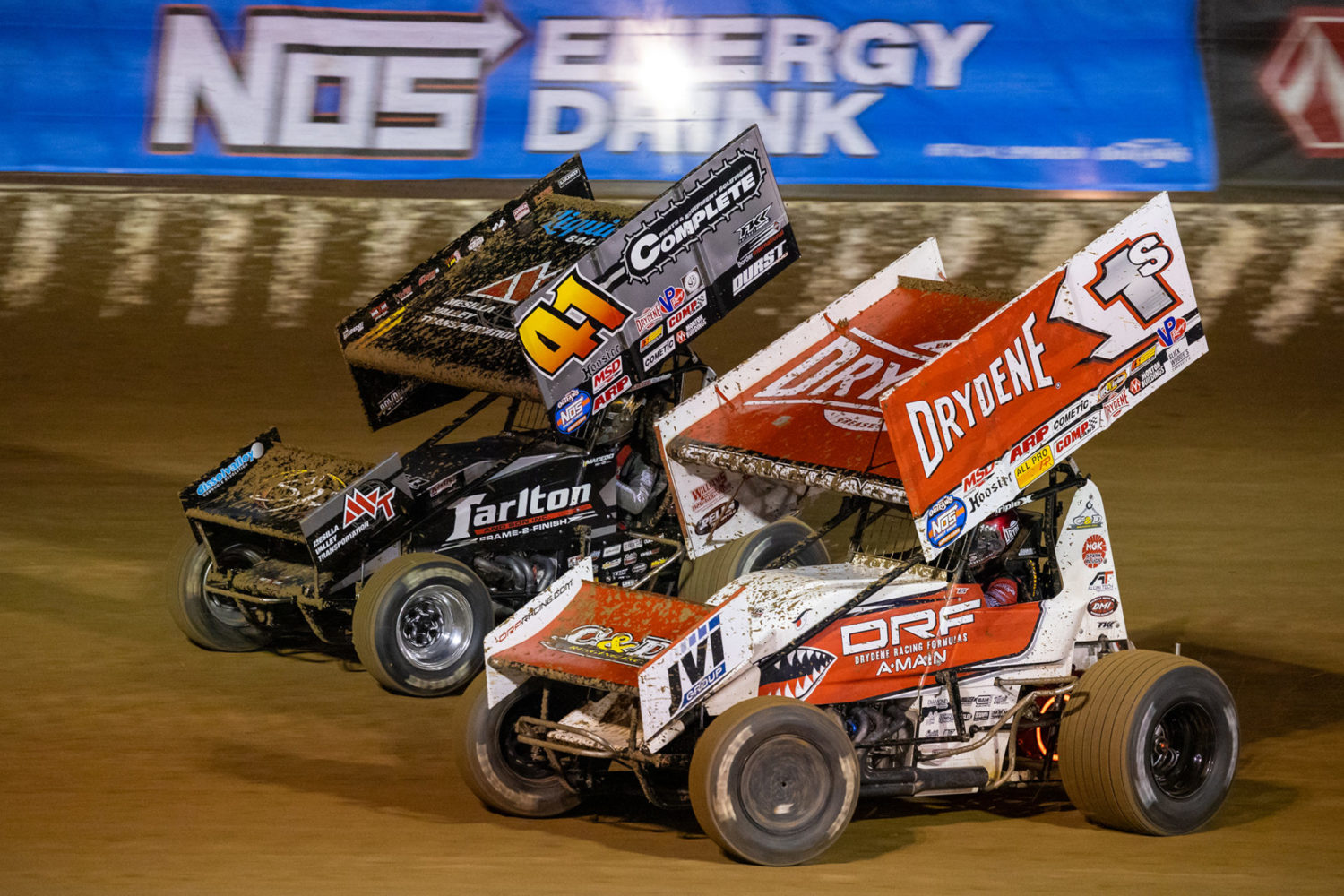 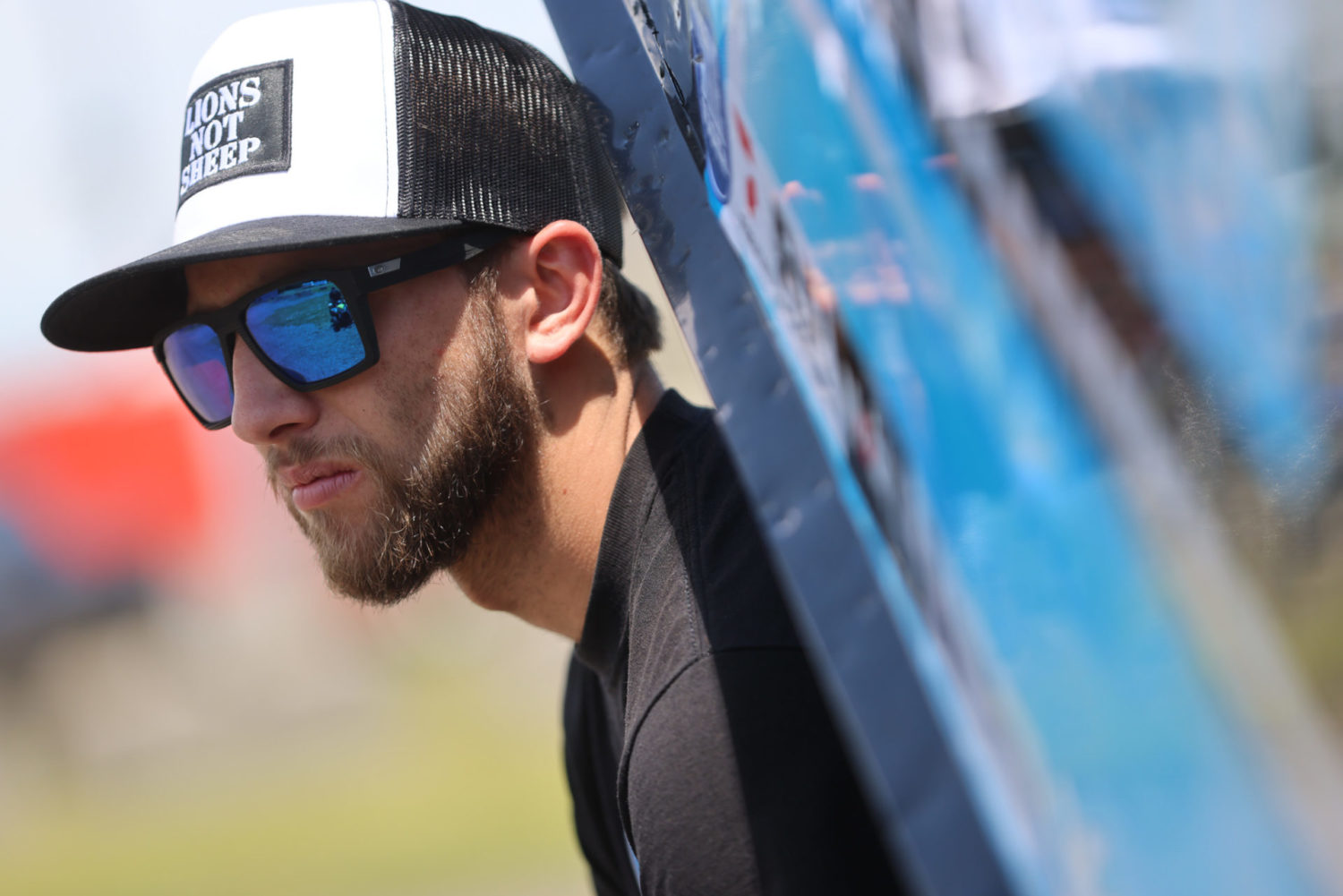 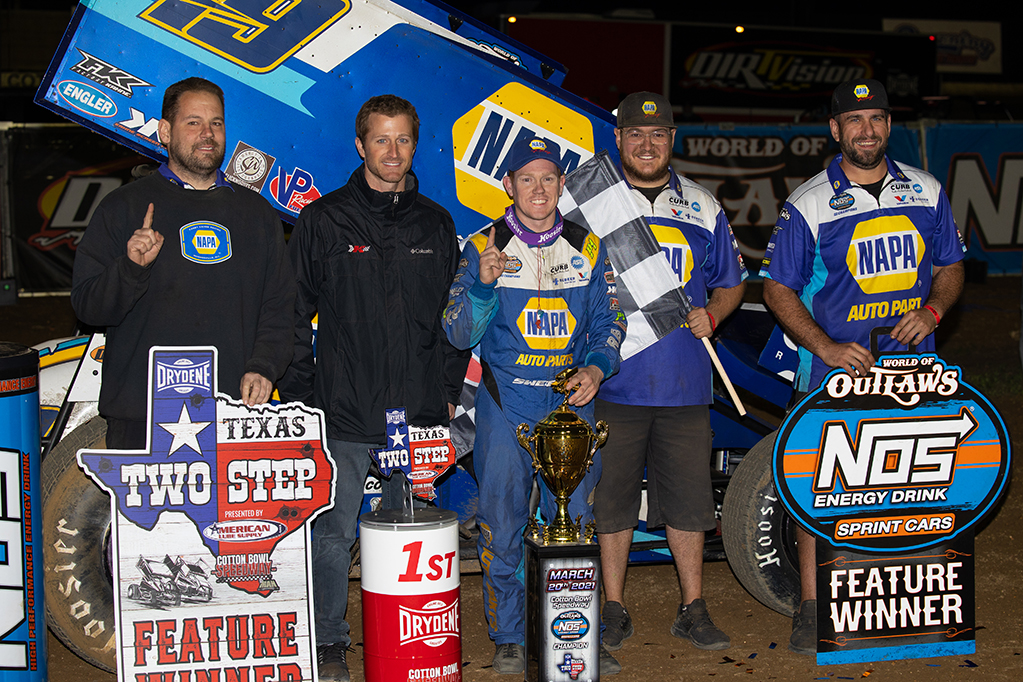 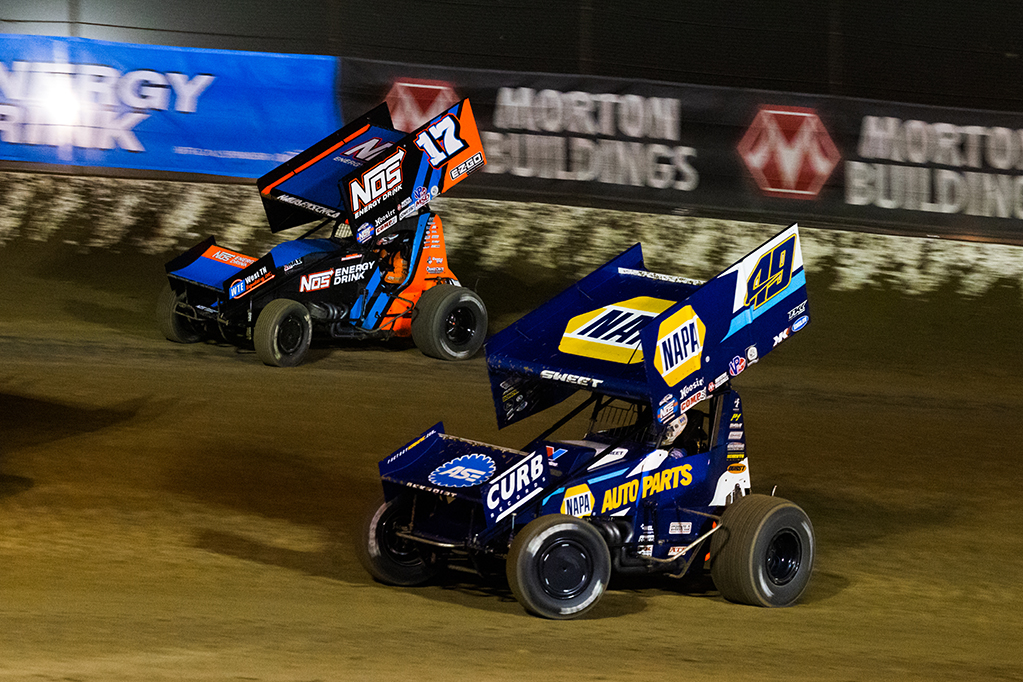 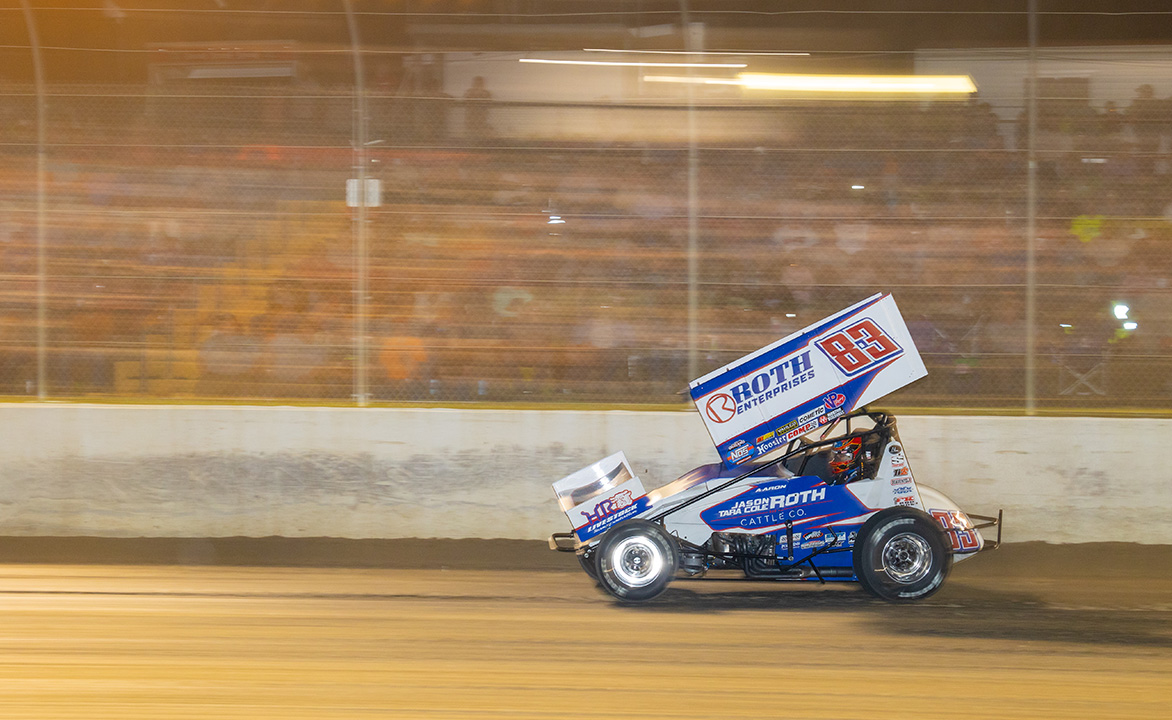