Event Description
A mega $100,000-to-win Crown Jewel is formed with the High Banks Nationals bringing the best of the best to South Dakota's Huset's Speedway.

Michael Kofoid was merely nine-years-old when he strapped in and manhandled a Sprint Car for the first time.

It was a life-changing experience for the Penngrove, CA native and drastically shaped his path to motorsports stardom at the ripe age of 20-years-old. Before Thursday, he was already a proven ace with a USAC National Midget championship, All Star Circuit of Champions victories, a Trophy Cup title, and success in the NASCAR Truck Series.

Of all those noteworthy accomplishments, though, nothing compares to what the kid they call “Buddy” finally achieved on Thursday night at Huset’s Speedway.

Winning night one of the inaugural High Bank Nationals, Kofoid fulfilled a childhood dream by beating the best Sprint Car drivers in the world to claim his first-career win with the World of Outlaws NOS Energy Drink Sprint Car Series. It was only his 16th start against The Greatest Show on Dirt and marked the first World of Outlaws win for car owner Crouch Motorsports, as well.

The young phenom started on the outside pole and drove by Brock Zearfoss to lead Lap four, but it wasn’t smooth sailing from there. Australian James McFadden passed the Indy Race Parts #11 on Lap 21, but Kofoid showed the prowess of a seasoned veteran as he regrouped, drove back by J-Mac, and mastered lap traffic over the final stages to earn a margin of victory at 2.177-seconds.

“I’m speechless,” an ecstatic Kofoid let out. “I’ve wanted to win a World of Outlaws for as long as I can remember. This is by far the biggest win of my career. To say I’ve beaten the best in the world is unbelievable. This is so special, wow. I knew our car was fast all day yesterday, and then today I knew we would have a chance. My guys Brad [Alexander] and Blade [Kearns] do one hell of a job, it’s just us three here this week. I have to thank Leighton Crouch and Bernie Stuebgen for everything they do for us as well. This is incredible.”

James McFadden of Alice Springs, NT, AUS capped off his whirlwind night with a season-best second-place finish aboard the Roth Motorsports #83. Things started on a bad note when Justin [Adams], Gary [Woodman], and Rob [Beattie] were forced to change engines during Hot Laps, but it all turned around as J-Mac timed in fifth quick and then drove from fifth-to-second in his Heat Race.

The reigning Kevin Gobrecht Rookie of the Year slid by Kofoid to lead the 21st lap in Thursday’s Feature, but a slight bobble in lap traffic the next time by allowed Kofoid to reclaim the point, and he never let it go from there. McFadden settled for a season-best runner-up as he continues to chase the 99th World of Outlaws win for car owners, Dennis & Teresa Roth.

“I got so caught up with lap cars there, it seemed like some of them were racing for the lead and that hurt me the most,” McFadden mentioned. “That is what killed my momentum the most when I got to Buddy for the lead. This Roth Motorsports car was great tonight, though. We’ve got the qualifying package figured out and now we’re back up front come Feature time. I’ve always enjoyed this place and hope to keep this rolling tomorrow.”

Earning his first World of Outlaws podium finish since 2020 was Parker Price-Miller in third-place aboard the Sam McGhee Motorsports #11. The two-time Series winner was c”

“We put a new engine in and changed the fueling from last night, and that made a huge difference for us tonight,” PPM noted. “I was really good late in the going here, but I just started too tight in the beginning. All in all, a great run for us. Landing on the podium against a field like this is always impressive. We’ve just gotta keep this going tomorrow night,”

Brock Zearfoss, who led the first three circuits from pole position, fell back to finish a season-best fourth in the Moose’s LZ Bar & Grill #3Z. Also earning his first World of Outlaws top-five of 2022 was Hunter Schuerenberg, an All Star Circuit of Champions regular, who finished P5 in the Tony Vermeer owned #55.

Rounding out the top-10 on Thursday night was David Gravel in the Big Game Motorsports #2, Sheldon Haudenschild in the Stenhouse Jr. / Marshall Racing #17, Giovanni Scelzi in the KCP Racing #18, Logan Schuchart in the Shark Racing #1S, and Carson Macedo in the Jason Johnson Racing #41.

Buddy Kofoid’s first-career victory makes him the 148th different winner in World of Outlaws NOS Energy Drink Sprint Car Series history. He’s the 29th driver from the state of California to win with The Greatest Show on Dirt, and the first in history to earn his initial triumph at Brandon, SD’s Huset’s Speedway.

Advancing +16 positions, Sheldon Haudenschild’s 23rd-to-seventh bid equaled the largest run for the KSE Hard Charger Award this season, as he earned the Award for a Series-leading fifth time on Thursday.

Championship leader Brad Sweet (involved in Lap 1 crash) finished 14th, only his fourth result outside the top-10 through 30 races. Thus, the standings again tightened with the entire top-five now separated by only 64 points.

UP NEXT (Thur-Sat) – The World of Outlaws NOS Energy Drink Sprint Car Series continues a weeklong affair at Huset’s Speedway in Brandon, SD with the inaugural High Bank Nationals on Friday-Saturday capped off by a mega $100,000-to-win finale. Fans can BUY TICKETS HERE, or watch every lap LIVE on DIRTVision. 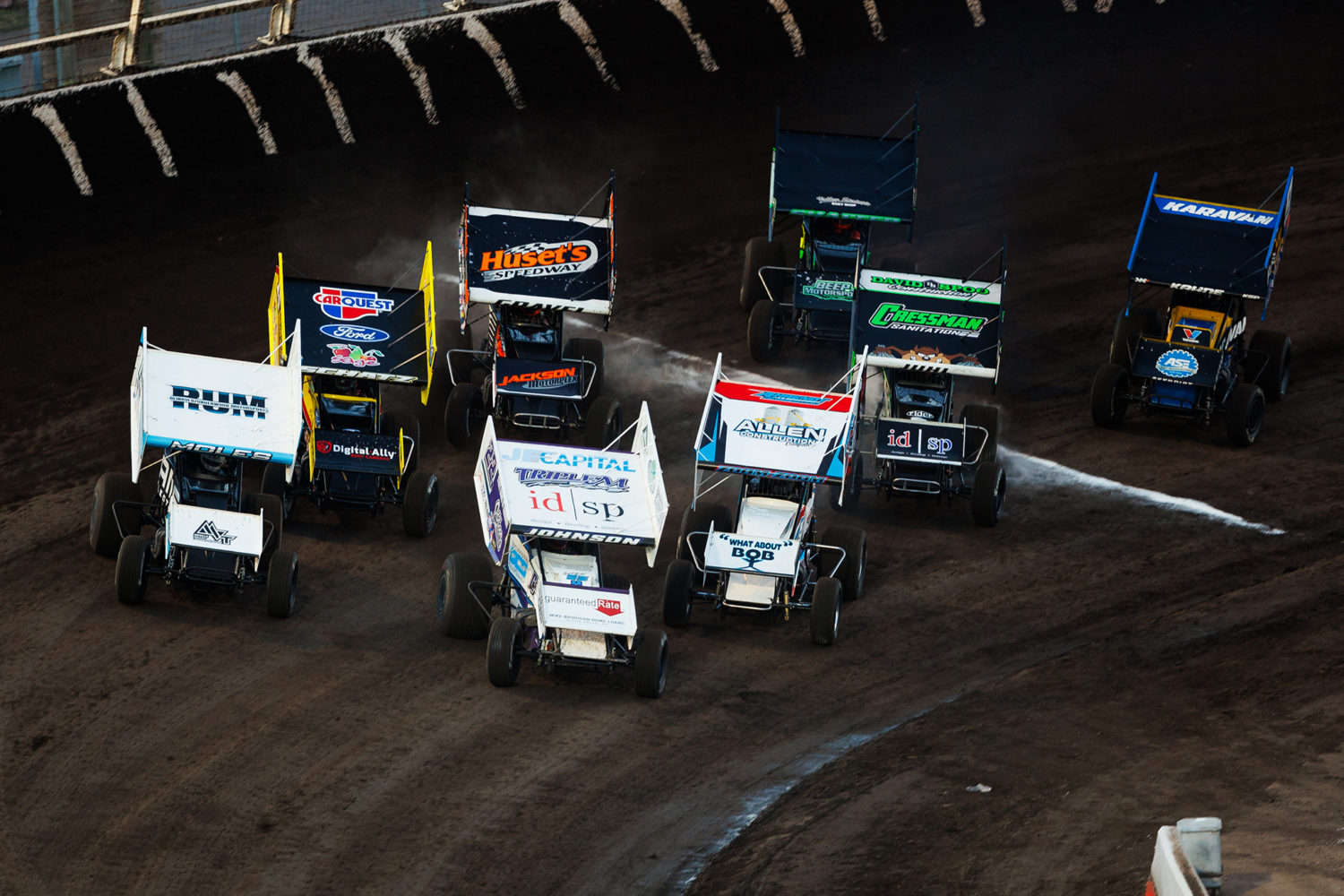 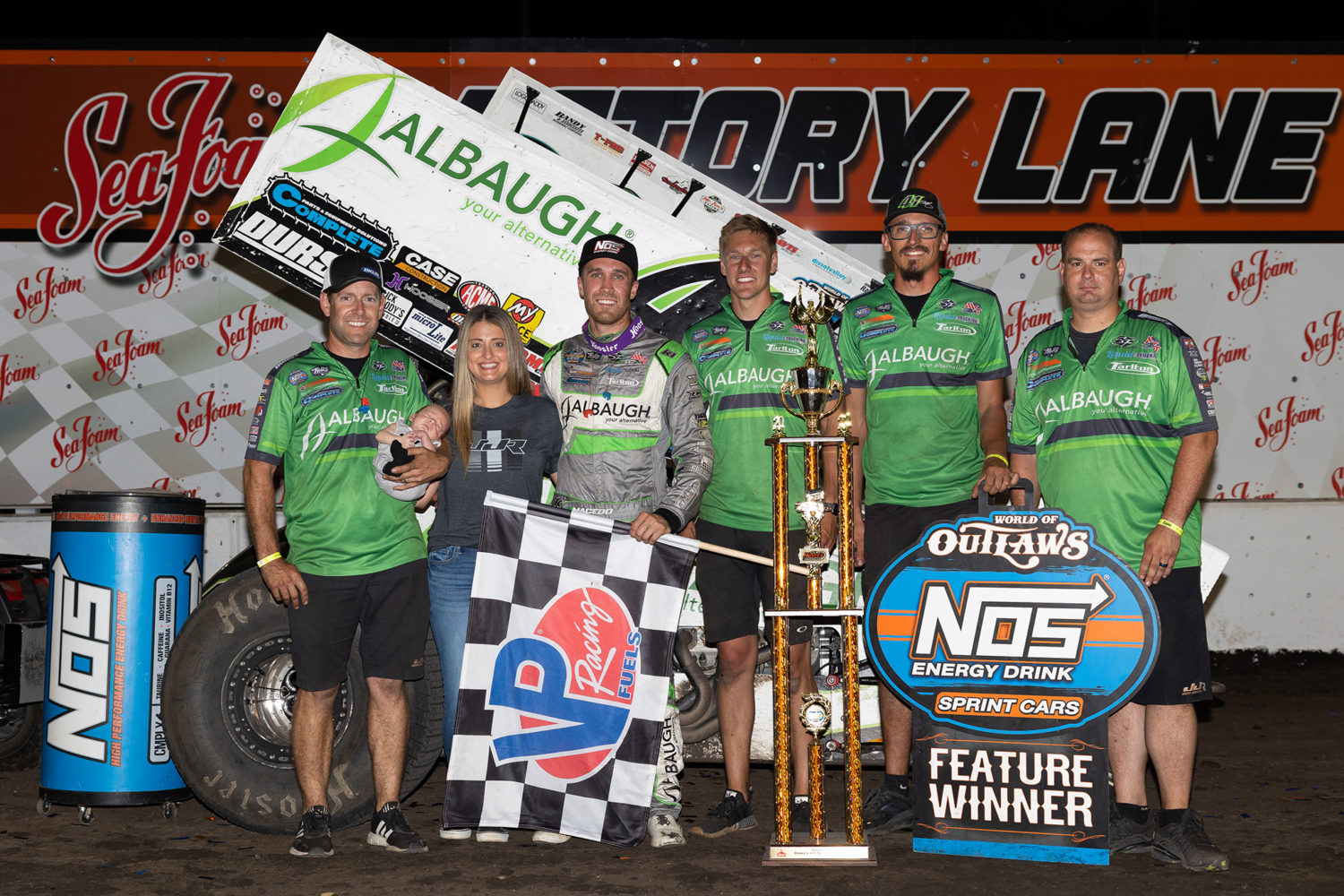 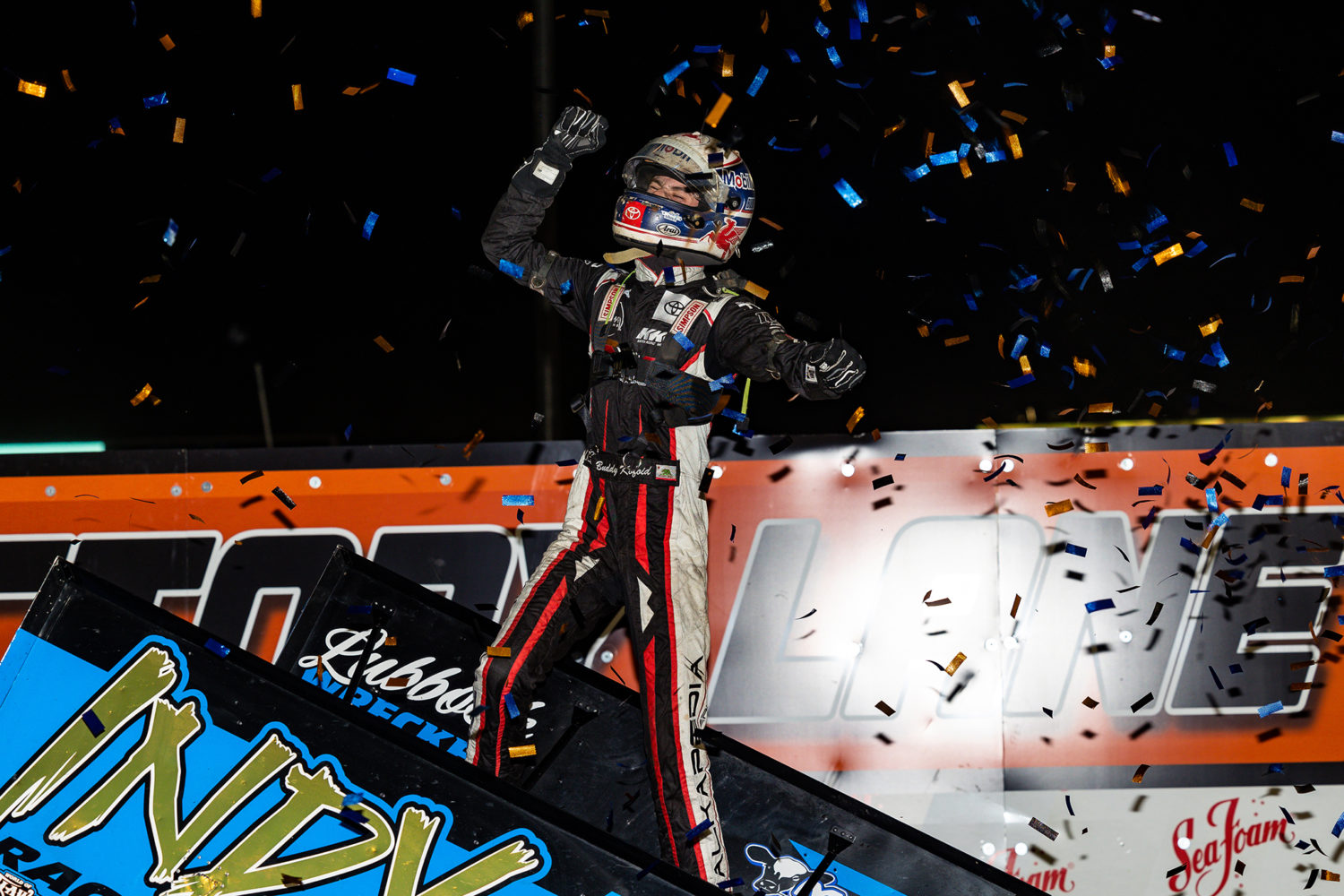 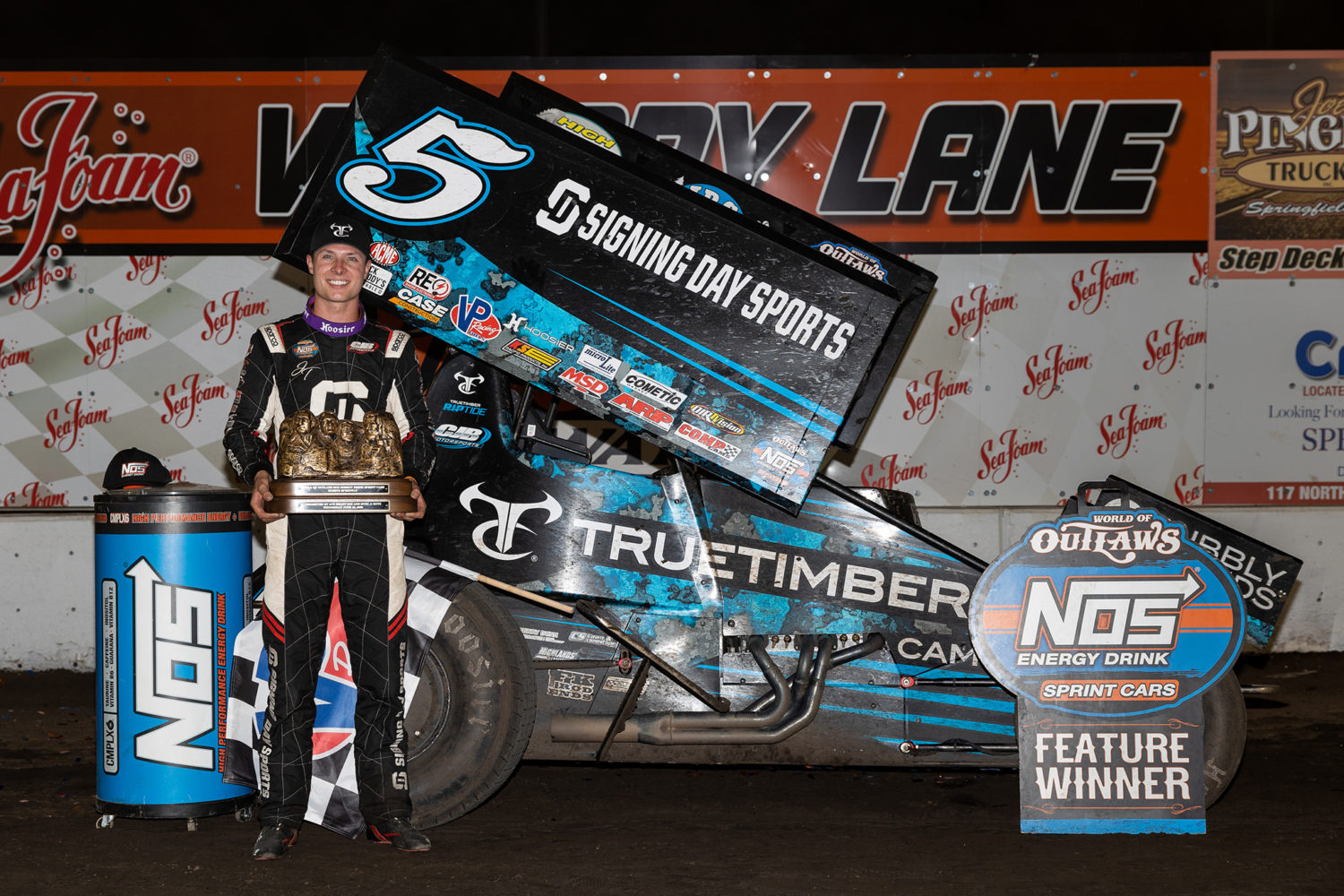 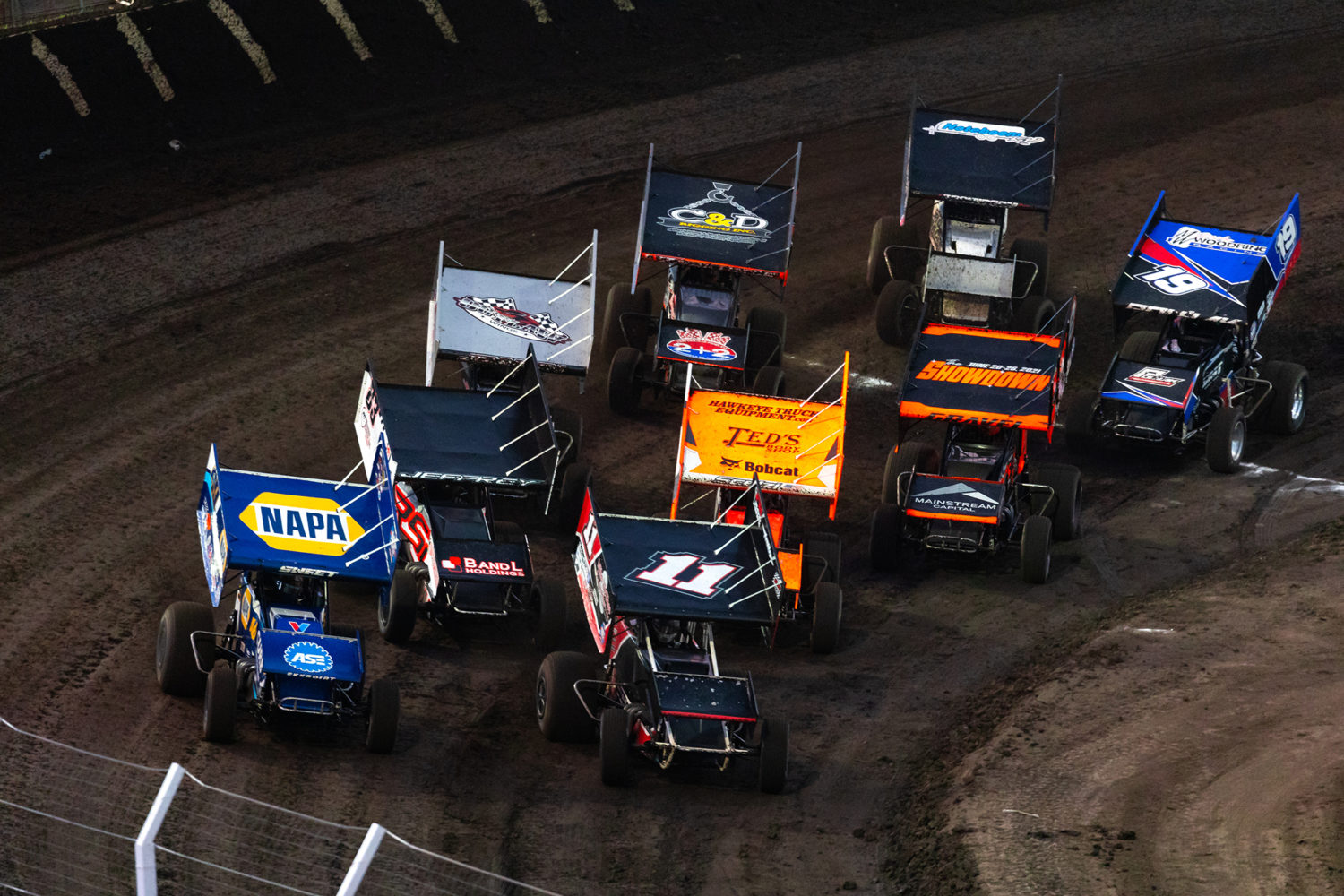 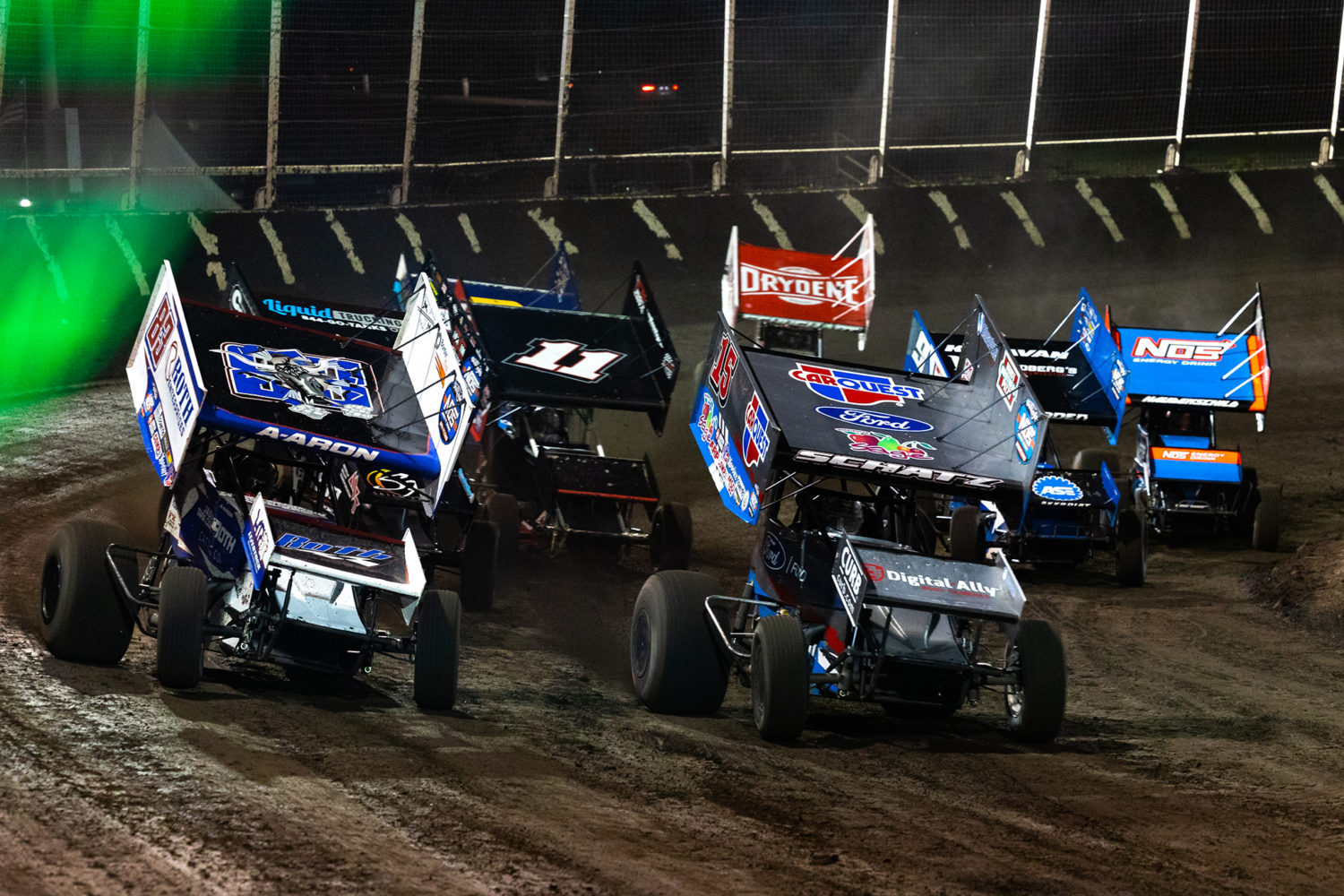 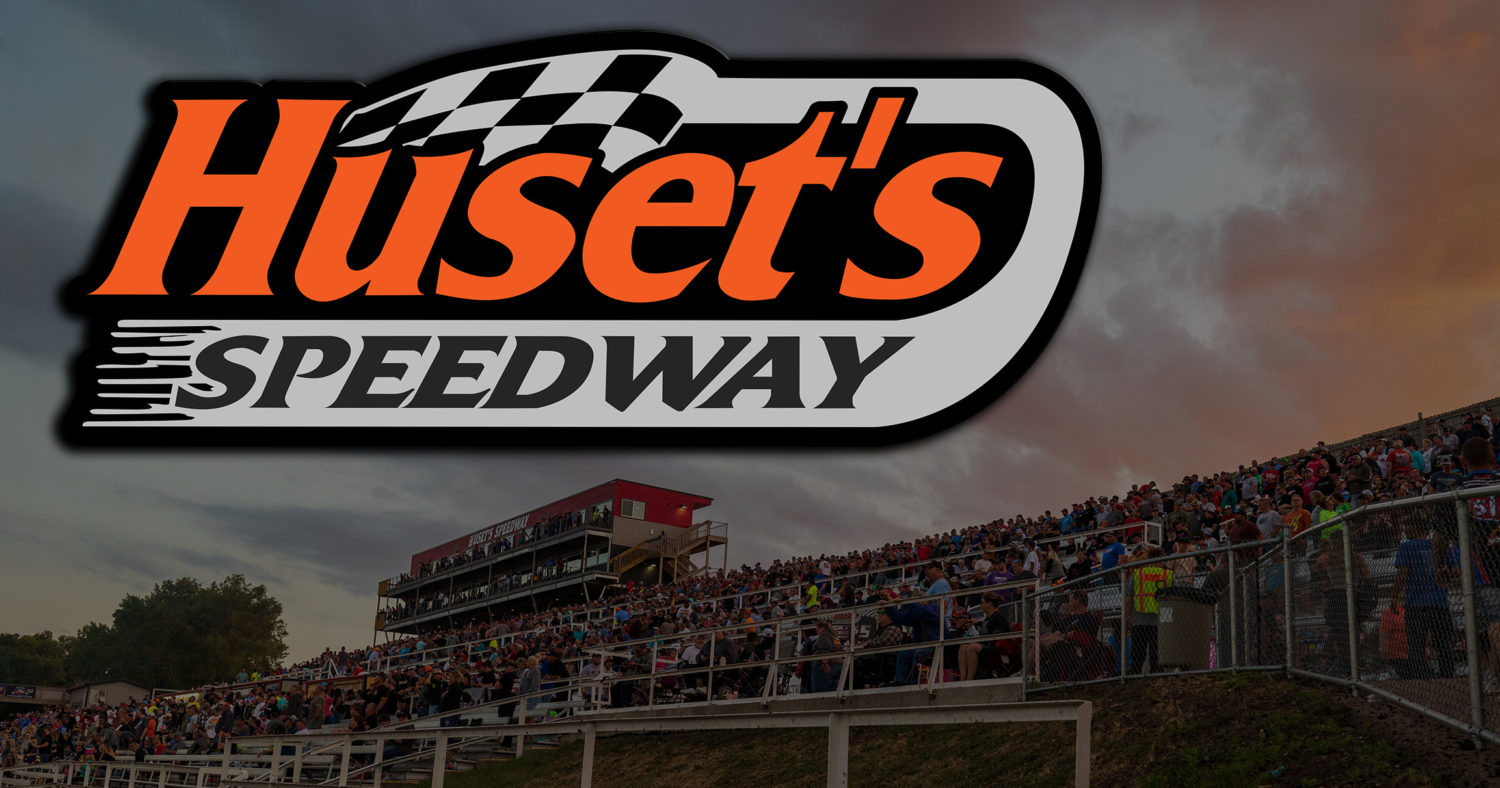 POSTPONED: Sunday Show at Huset’s Pushed Back to Wednesday, June 22 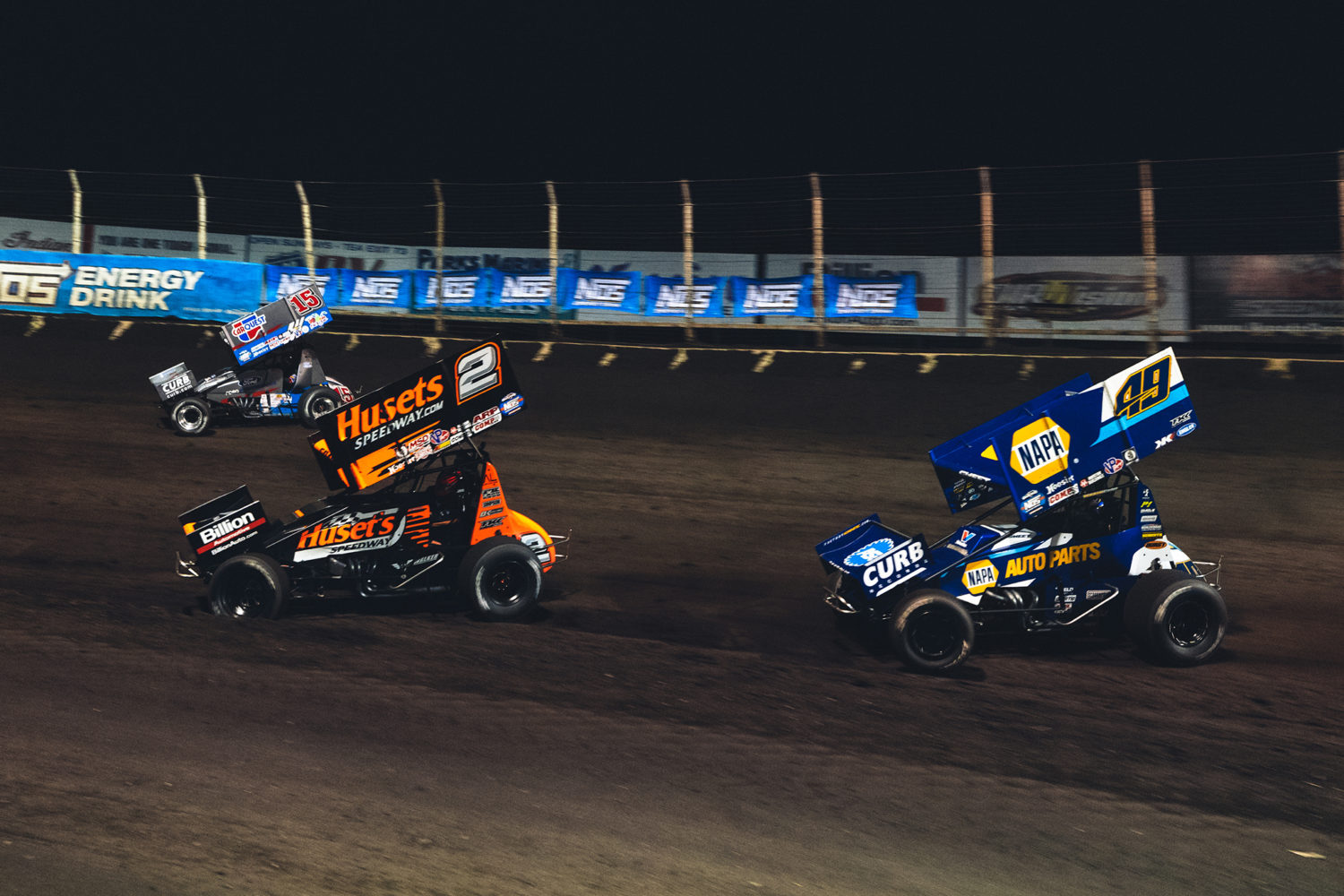