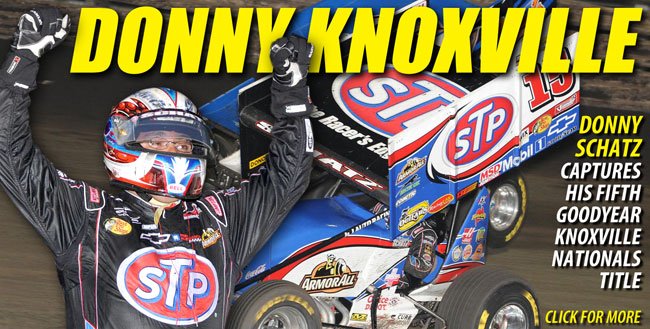 Gutsy early move to charge past Swindell and Sweet leads to $150,000 payday

KNOXVILLE, Iowa – Aug. 13, 2011 – Donny Schatz wasted little time finding his way to the front of the 51st Goodyear Knoxville Nationals on Saturday night at historic Knoxville Raceway. Normally a driver who excels in the latter stages of a race, the four-time World of Outlaws Sprint Car Series champion quickly charged from 13th to fifth, then set his sights on the lead of the $150,000-to-win, 50-lap main event.

Schatz struggled through his qualifying night on Wednesday when motor issues forced his car into the pits, but he was saved by strong time trial and heat race performances that blunted the effects of his rough time in the A-main.

“I was sweating bullets when I thought were going to have to come through the Last Chance Showdown after we finished 24th in that main (qualifying night),” said Schatz, of Fargo, N.D., who drives the Tony Stewart Racing STP/Armor All/Chevrolet. “Thankfully we had enough points to qualify to start 13th in Saturday’s show. My car was awesome all night long. The motor, the chassis, everything was great. The bottom was a place where my car was able to work really well early on and as the race progressed, I kind of wore out that line so I had to move up a bit. I’m very lucky to be with great people and I need to thank the over 1,100 people the signed up for our sign and ride program. It was really cool to get all of those people into victory lane tonight.”

Once the green flag flew, Schatz quickly mounted a charge to the front. Lap by lap, Schatz picked off car after car until a restart on lap 14 gave him the opportunity to make his move for the lead. Riding the low side, Schatz made it a three-wide coming down the front stretch underneath front row starters Sammy Swindell and Brad Sweet. From that point, Schatz held off hard-charging Oklahomans Daryn Pittman and Shane Stewart, who wound up second in his third consecutive event during the Goodyear Knoxville Nationals after being the runner-up in Friday’s Q20 Race of Champions and the Premier Chevy Dealers World Challenge.

“This guy over here started two rows in front of me and in a few laps, I couldn’t see him it all,” Stewart said as he motioned towards Schatz at the post-race press conference. “I looked up at the scoreboard during our first caution and noticed he was already in the top three. I feel really proud of our work. My team did a great job and we passed a lot of cars.”

Swindell earned the pole through a strong run on his qualifying day, but settled for third in the A-main.

“We just weren’t fast enough,” said Swindell, of Germantown, Tenn., who won the event in 1983. “During the red, we didn’t change much, just put two new rear tires on and I got a bad restart when we came off of that red. I was racing really hard towards the end to make up that ground I had lost but I just didn’t have enough.”

With the rigs and teams pulling out of the famed half mile oval, they now set their sights on the ‘Great Northern Tour’ that will see the Outlaws race Friday, Aug. 19, at River Cities Speedway in Grand Forks, N.D.; Saturday, Aug. 20 at Husets Speedway; Tuesday, Aug. 23, at Black Hills Speedway; and Aug. 26-27 at Castrol Raceway in Edmonton, Alberta.

WE’RE ONLINE – Make sure to check out the all-new WorldofOutlaws.com for the latest news and results, plus exclusive driver interviews, video and pictures. Also listen to every event live at DIRTVision.com.