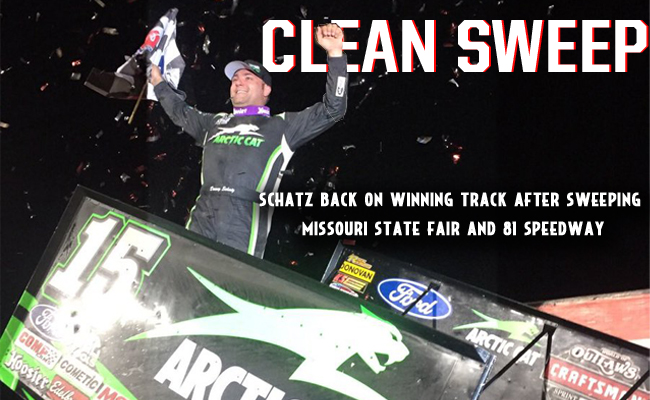 PARK City, KS.- May 7, 2017 –  Quite a bit has changed over the last 11 years since the last Donny Schatz had raced at 81 Speedway, prior to Saturday night. The track surface was reconfigured before this season, while the tires and wings on the cars have also changed over the last decade. One things that didn’t change was the end result as he won for the second straight time at the three-eights-mile as the Outlaws returned to 81 Speedway for the Kansas Outlaw Klassic presented by Great Clips, Murphy Tractor and the City of Park City, Kansas.

Schatz’s second consecutive win at 81 Speedway had extra meaning, as his crew chief Ricky Warner and his wife, have family members from the area, who are involved with the operations at 81 Speedway.

“This is like a hometown win for Rick and Danele Warner,” said Schatz. “Rick has been with me a long time and we have won a lot of races together. The last time we were here, we won and were fortunate to get here again tonight. It was a great crowd tonight and it’s great to see all of the enthusiasm here. It’s incredible to be standing here in front of them winning.”

Schatz started on the pole and led all 30 laps, but had a very close call, after some contact, when a pair of lapped cars got together right in front of him on the 18th lap. Despite sustaining some damage to his machine, the North Dakota native was able to lead flag-to-flag.

“The (No.) 4 car stopped and I got into him there,” noted Schatz. “I thought I was going over and when I got away from him I could steer, but I knew something was bent in the front. It obviously bent the front axle, but it didn’t really hurt me much. It might have actually helped me.”

On the double file restart, which was the only restart of the 30-lap main event, Schatz chose the low side of the three-eighths-mile, with Jason Johnson lined up beside him. A strong restart propelled Schatz as Johnson, David Gravel and Daryn Pittman all battled for second.

“We just had the car rolling and are trying a lot of funky things right now and there are a lot of weird pieces on this race car, but we are learning,” explained Schatz. “Sometimes you pay the price and April was that time, so May is going a lot better.”

Pittman used a last lap pass of Gravel to earn his second consecutive runner-up finish, as he continues to close in on his first win of the season in the Great Clips, No. 9 for Kasey Kahne Racing. Pittman started second and looked on the low side of the track a couple of times in the early going as he kept pace with Schatz.

“We are bringing better race cars to the track,” said Pittman. “Eric Prutzman is making great changes as the night goes on. Getting in the dash has been huge with the extra track time. Most of the headway we have made with our race cars the last two nights has been in the dash. That’s really been key. When the car is faster, it’s a lot more fun to drive.”

Pittman started second and kept pace with Schatz for the first few laps, before losing a couple of positions. Late in the race he had an entertaining battle with Gravel and Johnson for the runner-up position.

“We had to fight hard for that one,” shared Pittman. “We fell back to fourth and got by Jason (Johnson) after the yellow. (David) Gravel got caught up by a few lapped cars and we were able to get back by him coming to the checkers. It was a good finish and a good weekend for us.”

Gravel continued his strong season by picking up his 13th top-five finish of the season, with a third-place finish. The Connecticut native ran as high as second in the late going and was keeping up with Schatz in open track, before having some trouble getting by slower cars.

“Lapped cars were pretty tough, they were running pretty high and made it pretty difficult,” said Gravel. “It was hard to tell where they were going to go. Daryn (Pittman) got by me, but I think we had a second-place car. I just wish we could have qualified a little better to get in the dash and get another shot at the race track. If we had started on the front two rows, I think we could have gotten the win. We’ll take our podium and move on to the next race.”

The World of Outlaws Craftsman Sprint Car Series returns to action at the famed Eldora Speedway in Ohio on Friday, May 12 and Saturday, May 13.